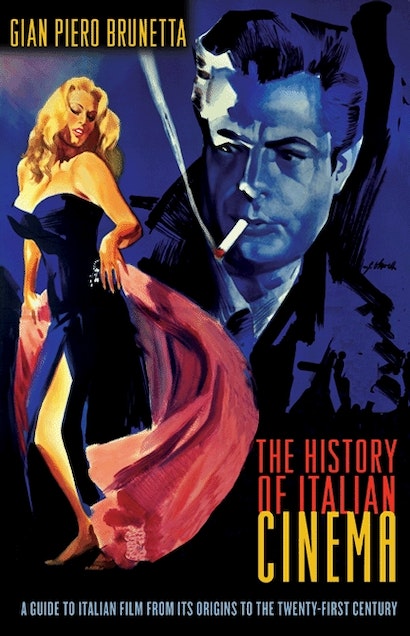 The History of Italian Cinema is the most comprehensive guide to Italian film ever published. Written by the foremost scholar of Italian cinema and presented here for the first time in English, this landmark book traces the complete history of filmmaking in Italy, from its origins in the silent era through its golden age in the 1940s, 1950s, and 1960s, and its subsequent decline to its resurgence today.

Gian Piero Brunetta covers more than 1,500 films, discussing renowned masters including Roberto Rossellini and Federico Fellini, as well as directors lesser known outside Italy like Dino Risi and Ettore Scola. He examines overlooked Italian genre films such as horror movies, comedies, and Westerns, and he also devotes attention to neglected periods like the Fascist era. Brunetta illuminates the epic scope of Italian filmmaking, showing it to be a powerful cultural force in Italy and leaving no doubt about its enduring influence abroad. Encompassing the social, political, and technical aspects of the craft, he recreates the world of Italian cinema, giving readers rare insights into the actors, cinematographers, film critics, and producers that have made Italian cinema unique. Brunetta’s passion as a true fan of Italian movies comes across on every page of this panoramic guide.

A delight for film lovers everywhere, The History of Italian Cinema reveals the full artistry of Italian film.

Gian Piero Brunetta is professor of the history and criticism of cinema at the University of Padua in Italy. His many books include the acclaimed five-volume History of World Cinema.

"[Brunetta is] widely recognised as the foremost historian of Italian cinema. . . . Covering the past 100 years or so of Italian cinema history, [The History of Italian Cinema] is a social, political, cultural, economic and literally geographic mapping of Italy's cinematic terrain. . . . [I]nvaluable."—Paul Sutton, Times Higher Education

"Brunetta transcends film-studies fads to restore the heft of traditional historiography. In a clear, sinuous narrative he details the development of Italian cinema as art and as industry, within its own cultural and political context and in the world."—M. Yacowar, Choice

"If you are a serious film buff, then this book is a godsend, covering all you need to know in great detail. It packs in such a great amount of information that it's pretty much a one-stop shop for getting to grips with Italy's cinematic past, present and future."—Italia

"Gian Piero Burnetta believes that Italian cinema is not simply one of the great movie industries but 'the Art Form of the 20th Century'—and he certainly makes a good fist of proving this bold proposition in his comprehensive new history."—West Australian

"Those approaching his work for the first time will gain confidence in the depth and scope of his knowledge of Italian cinema and culture."—Marcia Landy, European Legacy

"It is impossible to read this book without gaining new insight into Italian cinema, and twentieth-century Italian culture and history."—Frank Caso, Simply Charly

"Brunetta is without doubt Italy's foremost historian of Italian cinema, and this outstanding synthesis of his three decades of research on the subject belongs on every bookshelf devoted to film in general and Italian cinema in particular. It represents not only a brilliant overview but also a comprehensive reference guide to the entire history of Italian film from the silent era to the present."—Peter Bondanella, author of The Cinema of Federico Fellini

"This is a brilliant work, eclectic and engaging at every page. With the aim of providing a comprehensive history of Italian film, carefully envisioned from its origins to the present day, Brunetta approaches cinema in its broadest sense, analyzing the influence of all the elements and figures integral to the collaborative venture of filmmaking. He offers a strikingly original discussion of Italian cinema."—Gaetana Marrone, author of The Gaze and the Labyrinth