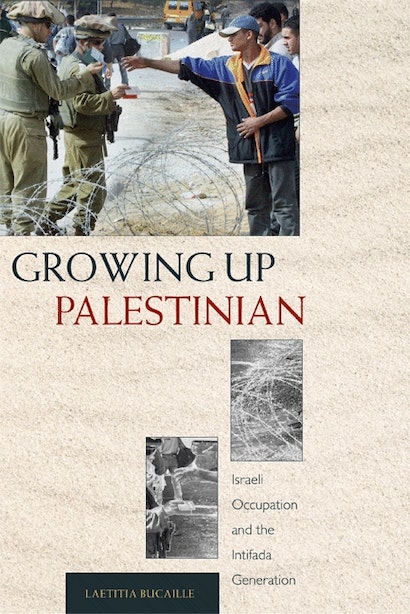 This remarkable book tells the inside story of three young men caught up in the Palestinian intifada. Through their stories, the tangled and tragic web of the past twenty years of the most enduring conflict in the Middle East unfolds before us. For over a decade, Laetitia Bucaille lived in the Occupied Territories for months at a time, gaining rare access to the three militants she calls Sami, Najy, and Bassam and many other Palestinians they crossed paths with — those who grew up during the first intifada and whose lives became bound up with the second, which erupted in 2000. The result is an intimate yet unsentimental portrait of daily life in the West Bank and Gaza from the mid-1980s to today.

Raised in squalid refugee camps, and veterans of Israeli prisons and forced exile, Sami, Najy, and Bassam are torn between the struggle against Israel and a desire for a stable family life. Shooting a suspected informer at point blank range turns out to be easier than learning job skills for a globalized economy. For many young Palestinians, collective political failure mirrors their shipwrecked lives.

A riveting blend of social and political analysis, Growing Up Palestinian shows us Palestinian society as it unfolds in camps, prisons, homes, and the street. This is a society divided by class, age, politics, and religion, and consumed by corruption — a society that must somehow integrate its underprivileged and brutalized youth into nonviolent and productive activity if it is ever to meet the daunting challenges ahead.

In a new afterword, the author examines the social and political developments in the Occupied Territories since the book’s publication in 2004, including the implications of Yasser Arafat’s death and the challenges and opportunities presented to his elected successor, Mahmood Abbas.

Laetitia Bucaille is Laetitia Bucaille is Assistant Professor of Sociology at the University of Bordeaux II; Associate Researcher at the Centre d'études de relations internationales of the l'Institut d'études politiques in Paris; and a member of the Institut universitaire de France. She is the author of Gaza: la violence de la paix.

"Readers wanting a look at the lives of young Palestinians and their society will be hard-pressed to find a better book."—Publishers Weekly

"A must for all those concerned with the Palestinian-Israeli conflict, the great value of this contemporary history is that it brings you close-up to the Palestinian people and their politics, revealing the differences among them, differences across generations but also of class, religion, politics, and place. . . . Neither simplistic nor sentimental, Bucaille shows that the conflict with the Israelis is inseparable from the Palestinians' conflict within their own community."—Booklist

"Like a painter of miniatures, Laetitia Bucaille describes a multitude of small scenes from the lives of young Palestinians, ushering us into a world view in which death gradually comes to occupy the central role. . . . This book offers a richly detailed look at the rise of that political impasse which engenders suicide bombings and the alarming commitment of martyrs."—Gilles Kepel, Le Monde

"Clear, measured and exacting, Growing Up Palestinian is required reading for anyone who professes to have an opinion about the Middle East."—Mary-Lou Zeitoun, Toronto Globe and Mail

"Growing Up Palestinian . . . concisely opens up whole tableaus of recent Palestinian history and provides a rich basis from which to delve further into that history."—John Collins, Journal of Palestinian Studies