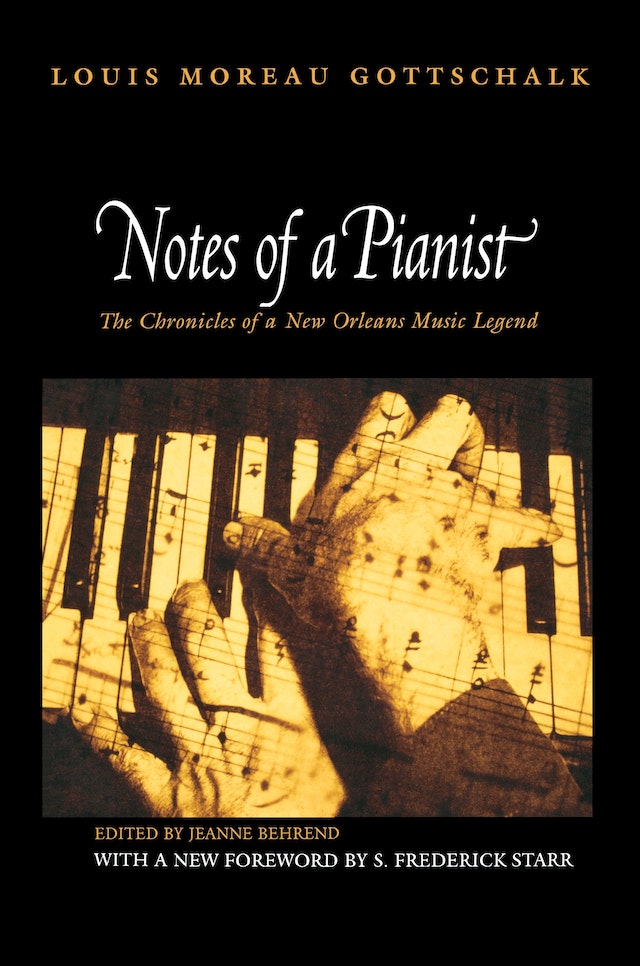 Notes of a Pianist chronicles the life of one of the most remarkable musical minds of the American experience, the great nineteenth-century New Orleans-born composer and pianist Louis Moreau Gottschalk (1829-1869). An important cultural and historical work, the book recounts Gottschalk’s experiences as he traveled and performed throughout the last decade of his life.


Born to an English-Jewish father and a Haitian mother, Gottschalk is remembered as one of the great New Orleans musicians and composers, his music a combination of the classical tradition in which he was trained, and the New Orleans tradition into which he was born. His art form took him far outside the boundaries of Louisiana, however. While still a child, he studied piano in Paris and gave a concert at the Salle Pleyel, after which Frédéric Chopin is said to have remarked: “Give me your hand, my child; I predict that you will become the king of pianists.” Gottschalk returned to the United States in 1853, and later lived in Cuba, Puerto Rico, Panama, and South America, during which time he kept-sometimes sporadically, sometimes daily — the notebooks that formed the basis of Notes of a Pianist.


Published for the first time in 1881, the book continues to resonate with American cultural and musical life. Notes of a Pianist demonstrates Gottschalk’s importance not only as a reporter of the musical life and tastes of Americans during the Civil War, but also as a forefather of Louisiana’s rich musical culture.

Jeanne Behrend (1912-1988) was a composer and concert pianist who specialized in American music. She taught at Juilliard, the Philadelphia Conservatory of Music, and Temple University. S. Frederick Starr lives in New Orleans and is the author of Bamboula! The Life and Times of Louis Moreau Gottschalk, as well as other books on New Orleanian life and culture. He is also Professor of International History at Johns Hopkins University School of International Studies in Washington, D.C.

"In his autobiographical Notes of a Pianist, nineteenth-century New Orleans piano virtuoso and composer Louis Moreau Gottschalk shares with us his impressions as he travels through North and South America. His concert schedule and the number of cities he visits in a year during the age of locomotive and steamship would be daunting to even the most travel-hardened jet-age road warrior. Whether at a railroad siding worrying about the fate of his precious Chickering concert grand pianos before the Civil War battle of Gettysburg, fleeing San Francisco for South America because of a concocted scandal, or tending the wounded during the revolution in Lima, Peru, Gottschalk puts the reader in the middle of the action. His writing style is like his music—bold, colorful, romantic, virtuosic, and dramatic."—Lambert Orkis, Grammy Award-winning pianist

"Having grown up in opera-mad New Orleans in a household in which Creole tunes were probably common currency, Louis Moreau Gottschalk, after finishing school in Paris, gave free rein to his captivating and spontaneous fantasy and melodic charm. As Frederick Starr convincingly shows, his music was brilliant and original. And it leaves, when sympathetically presented, an indelible impression of his genius."—Lawrence Gushee, University of Illinois at Urbana-Champaign, author of Pioneers of Jazz: The Story of the Creole Band

"Over and above all [the] purely sensuous aspects of [Gottschalk's] pianism . . . Was the presence of a genuinely musical soul. This was what most commanded the admiration of his friend and mentor Hector Berlioz: his musicianship, his taste, and his fine sense of proportion."—From the editor's Prelude