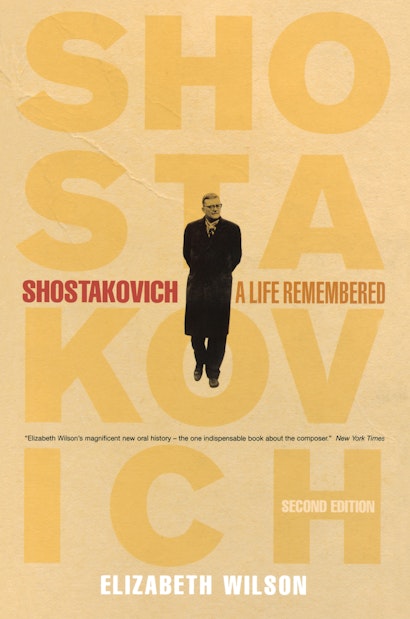 Shostakovich: A Life Remembered is a unique study of the great composer Dmitri Shostakovich, based on reminiscences from his contemporaries. Elizabeth Wilson covers the composer’s life from his early successes to his struggles under the Stalinist regime, and his international recognition as one of the leading composers of the twentieth century. She builds up a detailed picture of Shostakovich’s creative processes, how he was perceived by contemporaries, and of the increased contrast between his private life and public image as his fame increased.


This new edition, produced to coincide with the centenary of Shostakovich’s birth, draws on many new writings on the composer. In doing so, it provides both a more detailed and focused image of Shostakovich’s life and a wider view of his cultural background. In particular, Shostakovich’s sardonic and witty sense of humor reveals itself in many of his letters to close friends. Shostakovich offers fascinating insight into the complex personality and musical life of this great composer, and examines his position as one of the major figures in the cultural life of twentieth-century Russia.

Elizabeth Wilson, a cellist and Russianist, studied at the Moscow State Conservatory with Mstislav Rostropovich between 1964 and 1971. She is a teacher, writer, and performer.

"Praise for the previous edition: "Elizabeth Wilson's magnificent new oral history, Shostakovich: A Life Remembered, [is] the one indispensable book about the composer.""—Richard Taruskin, The New York Times

"Praise for the previous edition: "[Wilson] has gathered numerous recollections of Shostakovich and organized them into an enormous biography that follows every step of his life. . . . Together, these diverse sources provide a mosaic portrait of a shy, fidgety, punctilious musician.""—New Yorker

"[T]he most important book ever published about the greatest Russian composer of the twentieth century. . . . For the first time, Shostakovich's anguished personality comes into focus, and his emotionally devastating encounters with the Soviet government are put into trustworthy perspective."—The New York Daily News