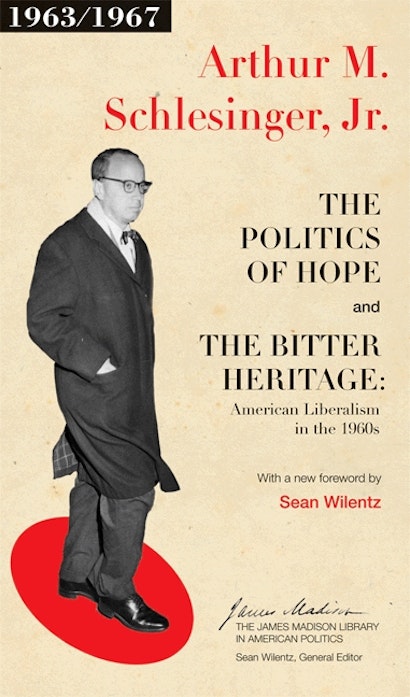 The Politics of Hope and The Bitter Heritage brings together two important books that bracket the tempestuous politics of 1960s America. In The Politics of Hope, which historian Arthur Schlesinger, Jr., published in 1963 while serving as a special assistant to President Kennedy, Schlesinger defines the liberalism that characterized the Kennedy administration and the optimistic early Sixties. In lively and incisive essays, most of them written between 1956 and 1960, on topics such as the basic differences underlying liberal and conservative politics, the writing of history, and the experience of Communist countries, Schlesinger emphasizes the liberal thinker’s responsibility to abide by goals rather than dogma, to learn from history, and to look to the future.

Four years later, following Kennedy’s assassination and the escalation of America’s involvement in Vietnam, Schlesinger’s tone changes. In The Bitter Heritage, a brief but penetrating appraisal of the “war that nobody wanted,” he recounts America’s entry into Vietnam, the history of the war, and its policy implications. The Bitter Heritage concludes with an eloquent and sobering assessment of the war’s threat to American democracy and a reflection on the lessons or legacies of the Vietman conflict.

With a new foreword by Sean Wilentz, the James Madison Library edition of The Politics of Hope and The Bitter Heritage situates liberalism in the convulsive 1960s — and illuminates the challenges that still face liberalism today.

Arthur M. Schlesinger, Jr. (1917-2007), was one of the world's most distinguished historians and political commentators. He was professor of history at Harvard from 1946 until 1961, when President Kennedy appointed him special assistant for Latin American affairs. In 1966, he began teaching at the City University of New York Graduate Center, and in 1994 he became an emeritus professor there. His many books include The Age of Jackson and A Thousand Days, both of which received the Pulitzer Prize.