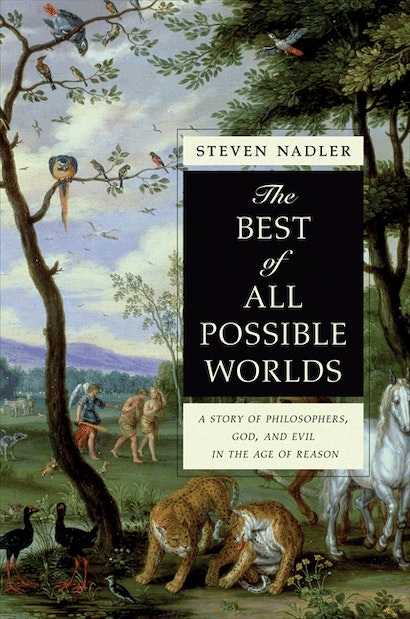 In the spring of 1672, German philosopher and mathematician Gottfried Wilhelm Leibniz arrived in Paris, home of France’s two greatest philosopher-theologians of the period, Antoine Arnauld and Nicolas de Malebranche. The meeting of these three men represents a profoundly important moment in the history of philosophical and religious thought.

In The Best of All Possible Worlds, Steven Nadler tells the story of a clash between radically divergent worldviews. At its heart are the dramatic — and often turbulent — relationships between these brilliant and resolute individuals. Despite their wildly different views and personalities, the three philosophers shared a single, passionate concern: resolving the problem of evil. Why is it that, in a world created by an all-powerful, all-wise, and infinitely just God, there is sin and suffering? Why do bad things happen to good people, and good things to bad people?

The Best of All Possible Worlds brings to life a debate that obsessed its participants, captivated European intellectuals, and continues to inform our ways of thinking about God, morality, and the world.

Steven Nadler is the William H. Hay II Professor of Philosophy at the University of Wisconsin-Madison. He is the author of Rembrandt's Jews, a finalist for the 2004 Pulitzer Prize, as well as Spinoza: A Life and Spinoza's Heresy.

"The centerpiece of this intellectual history is a vicious late 17th-century debate between three unlikely combatants. . . . Nadler's superb study makes for a larger space for Leibniz, Malebranche, and Arnauld alongside such giants of the period as Descartes and Spinoza."—Publishers Weekly

"Why did a loving God create a world marred by so much evil? In three seventeenth-century intellectuals who wrestled with this question, Nadler recognizes how a single inquiry can profoundly engage markedly different minds."—Bryce Christensen, Booklist

"Nadler knows as much about Spinoza and Malebranche as any man alive, and enough about Arnauld and Leibniz to engage at need with detailed issues of scholarship. He is a serious scholar at the peak of his powers. . . . What he has given us here is a wonderfully vivid and lifelike portrait of one of the great debates that dominate Early Modern Philosophy, the echoes of which continue to reverberate down the ages."—Andrew Pyle, Metascience

"[I]f you want to know about pictures of Descartes, this is the place to look. The colour plates in themselves are a justification for having the book to hand, (let alone the many black and white images including one of Descartes in a baseball cap)."—Martin Cohen, Philosopher

"The Best of All Possible Worlds is a wonderfully engaging book. Nadler, with his characteristic clarity, has produced a true and rare philosophical page-turner."—Michael Della Rocca, Yale University