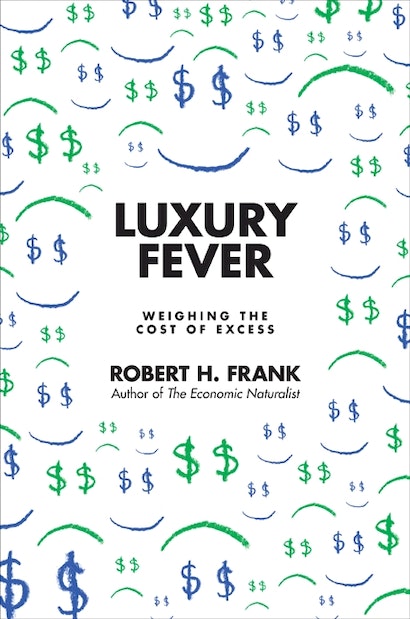 The turn of the twenty-first century witnessed a spectacular rise in gross consumption. With the super-rich setting the pace, everyone spent furiously in a desperate attempt to keep up. As cars and houses grew larger and more expensive, the costs were enormous — not only monetarily but also socially. Consumers spent more time at work and less time with their family and friends; they saved less money and borrowed more.

In this book, Robert Frank presents the first comprehensive and accessible account of these financial choices. Frank uses scientific evidence to demonstrate how these spending patterns have not made us happier or healthier. Luxury Fever offers an exit from the rat race, suggesting ways to curb the culture of excess and restore true value to our lives.

Robert H. Frank is the Henrietta Johnson Louis Professor of Management and professor of economics at Cornell University, as well as an economics columnist for the New York Times. His books include The Winner-Take-All Society (with Philip Cook), What Price the Moral High Ground?, The Economic Naturalist, and Principles of Economics (with Ben Bernanke).

"Luxury Fever is an important book. . . . It's admirable that an economist makes use of the research of behavioral biologists and evolutionary psychologists to explain why consumers spend as they do."—USA Today

"Frank's analysis should be just as interesting to those who do not share his political position as to those who do."—Samuel Brittan, Times Literary Supplement

"One does not have to be the kind of person who complains about fat-cat City salaries to wonder whether certain wealthy people are not, on the one hand, rich beyond utility, and spending their money on things that no sane consumer needs, on the other. Robert Frank's thoughtful study of conspicuous consumption . . . has a dreadful fascination."—Sunday Times

"The shop-till-you-drop, 'retail therapy' culture may have become more dominant in the last few years. . . . But are we really any happier for it? One person who thinks we are not is Robert Frank . . . whose new book, Luxury Fever, has been causing a bit of a stir. . . . The burst of consumerism in the U.S. . . . gives a new bite to these well-rehearsed concerns."—The Independent