The story of economics from Adam Smith to Paul Samuelson 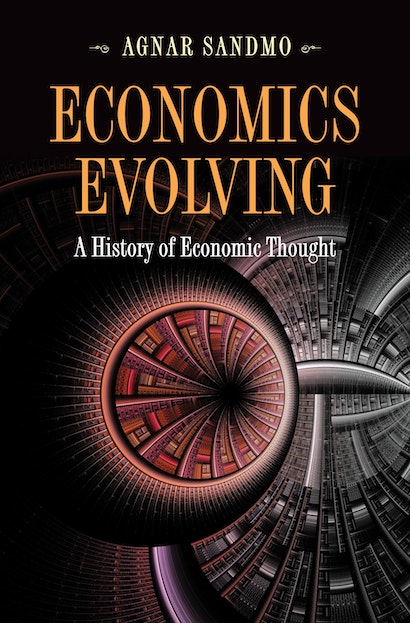 In clear, nontechnical language, this introductory textbook describes the history of economic thought, focusing on the development of economic theory from Adam Smith’s Wealth of Nations to the late twentieth century.

The text concentrates on the most important figures in the history of economics, from Smith, Thomas Robert Malthus, David Ricardo, John Stuart Mill, and Karl Marx in the classical period to John Maynard Keynes and the leading economists of the postwar era, such as John Hicks, Milton Friedman, and Paul Samuelson. It describes the development of theories concerning prices and markets, money and the price level, population and capital accumulation, and the choice between socialism and the market economy. The book examines how important economists have reflected on the sometimes conflicting goals of efficient resource use and socially acceptable income distribution. It also provides sketches of the lives and times of the major economists.

Economics Evolving repeatedly shows how apparently simple ideas that are now taken for granted were at one time at the cutting edge of economics research. For example, the demand curve that today’s students probably get to know during their first economics lecture was originally drawn by one of the most innovative theorists in the history of the subject. The book demonstrates not only how the study of economics has progressed over the course of its history, but also that it is still a developing science.

Agnar Sandmo is professor emeritus of economics at the Norwegian School of Economics and Business Administration. He is the author of The Public Economics of the Environment.

"An enjoyable and detailed presentation of the history of our profession. The focus is on the thoughts of individuals and, while schools of thought are broached, they are not central to the presentation. Historical background is presented and considered, but it is the development of economic thoughts that are at the heart of this analysis."—John J. Bethune, EH.Net

"In non-technical language, he analyses how these great thinkers developed their theories, making for an essential guide to the great economic thinkers of the past 200-odd years."—Economist

"Taken as whole, this is one of those relatively rare books on economics that is both readable and thoughtful. It also fills a gap in the literature between primers written for non-economists and detailed (and sometimes arduous) histories of economic thought or its various subfields."—Cameron Gordon, Economic Record

"Economists have long known Agnar Sandmo as one of our clearest thinkers and most lucid expositors. He uses these skills brilliantly in this history of our discipline. He gives us simple, succinct, and thoughtful accounts of the ideas that have shaped the subject over the past three centuries. This book by itself constitutes a compelling argument for restoring the history of economic thought to the graduate curriculum."—Avinash Dixit, Princeton University

"In this book, one of Europe's greatest contemporary economists writes about great figures in the history of economic thought. Agnar Sandmo's Economics Evolving convinces by its clarity, depth, and readability. Highly recommended for students, scholars, and the general public alike."—Hans-Werner Sinn, president of the Ifo Institute for Economic Research, Ludwig-Maximilian-University, Munich

"This book shows why the history of economics should be taken more seriously."—Geoffrey M. Hodgson, University of Hertfordshire

"Agnar Sandmo has written a lively, readable, and scholarly account of how the central core of economics has evolved from Adam Smith to the postwar era, and of how it continues to evolve. Students and instructors will find this volume both helpful and enjoyable."—Robert Dimand, Brock University

"This scholarly, authoritative, and lucid survey of the history of economic thought should be required reading for every student of economics, and can be read with profit and pleasure by professional economists and interested noneconomists alike. The book gives just the right amount of detail on the lives and contributions of the great economists, and its most striking achievement lies in its beautifully clear explanations of even the most complex ideas, without recourse to equations or jargon."—Ray Rees, University of Munich