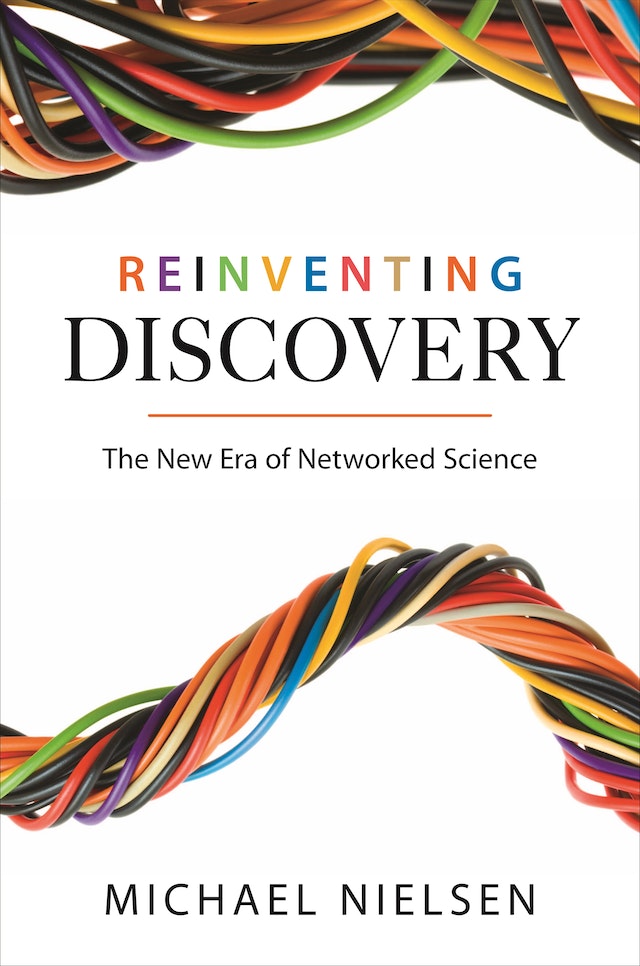 In Reinventing Discovery, Michael Nielsen argues that we are living at the dawn of the most dramatic change in science in more than 300 years. This change is being driven by powerful new cognitive tools, enabled by the internet, which are greatly accelerating scientific discovery. There are many books about how the internet is changing business or the workplace or government. But this is the first book about something much more fundamental: how the internet is transforming the nature of our collective intelligence and how we understand the world.

Reinventing Discovery tells the exciting story of an unprecedented new era of networked science. We learn, for example, how mathematicians in the Polymath Project are spontaneously coming together to collaborate online, tackling and rapidly demolishing previously unsolved problems. We learn how 250,000 amateur astronomers are working together in a project called Galaxy Zoo to understand the large-scale structure of the Universe, and how they are making astonishing discoveries, including an entirely new kind of galaxy. These efforts are just a small part of the larger story told in this book—the story of how scientists are using the internet to dramatically expand our problem-solving ability and increase our combined brainpower.

This is a book for anyone who wants to understand how the online world is revolutionizing scientific discovery today—and why the revolution is just beginning.

"This book is suited to a wide audience: those interested in greater detail . . . can view the appendix, bibliographic essay, and references at the end of the book, but Nielsen has written the main text in an engaging narrative style. Suitable for communities served by academic, public, and perhaps secondary school libraries, Nielsen's work is enjoyable and compelling."—Lia Vella, Issues in Science and Technology Librarianship

"A worthy manifesto for an important cause."—Michael Gilding, Inside Story

"Reinventing Discovery provides an important first sketch of the rapidly emerging networked science and makes it clear that certain fields of discovery can take advantage of an unprecedented acceleration enabled by online networks."—Thomas Vogt, Physics Today

"Nielsen's book is an amazing collection of interesting examples, important protagonists and references. It makes illustrative comparisons to open source software development. With his easily readable, well explained and perfectly argued style, Nielsen manages to keep the reader interested in this rather dry philosophical topic throughout the whole book. . . . [T]he book provides a comprehensive overview of developments in open science and is more than worth the reading time for someone interested in the foundations of science."—Florian Fisch, Lab Times

"Although this book is written in the 'popular science' style, it is not as breathless as many comparable texts and it is written by a practising scientist with a widely cited output in the field of quantum computing. It is recommended reading for any academic pathologists."—Simon Cross, Bulletin of the Royal College of Pathologists

"Nielsen's book is timely and makes the case that scientists have the 'opportunity to change the way knowledge is constructed.' Librarians reading this book will find content that is familiar such as the discussions on open access, open data, and data citation initiatives. The take-away is that Nielsen, as a scientist, is addressing his peers on topics that are also important to librarians. Perhaps Nielsen's Reinventing Discovery: The Era of Networked Science will be the impetus for 'lighting an almighty fire under the scientific community' in creating an open scientific culture."—Barbara Losoff, portal: Libraries and the Academy

"This is a book for anyone who wants to understand how the online world is revolutionizing scientific discovery today—and why the revolution is just beginning."—World Book Industry

"[Reinventing Discovery] opens with a fantastic account of what we can learn about the future of science from explorations such as the Polymath Project and 'the greatest chess game in history,' Kasparov vs. the World. But what really distinguishes it is its nuanced, intelligent descriptions of just how these projects work, noticing what is important about them in a way that few popular summaries do. . . . Highly recommended!"—Tim O'Reilly, Founder and CEO of O'Reilly Media

"Anyone who has followed science in recent years has noticed something odd: science is less and less about a solitary scientist working alone in a lab. Scientists are working in networks, and those networks are gaining scope, speed, and power through the internet. Nonscientists have been getting in on the act, too, folding proteins and identifying galaxies. Michael Nielsen has been watching these developments too, but he's done much more: he's provided the best synthesis I've seen of this new kind of science, and he's also thought deeply about what it means for the future of how we understand the world. Reinventing Discovery is a delightfully written, thought-provoking book."—Carl Zimmer, author of A Planet of Viruses and The Tangled Bank: An Introduction to Evolution

"This is the book on how networks will drive a revolution in scientific discovery; definitely recommended."—Tyler Cowen, author of The Great Stagnation

"Science has always been a contact sport; the interaction of many minds is the engine of the discipline. Michael Nielsen has given us an unparalleled account of how new tools for collaboration are transforming scientific practice. Reinventing Discovery doesn't just help us understand how the sciences are changing, it shows us how we can participate in the change."—Clay Shirky, author of Here Comes Everybody and Cognitive Surplus

"This wonderful book is a pleasure to read. Michael Nielsen writes in an authoritative yet clear, concise, and accessible style, making an informative and compelling case for open, networked science and how to achieve it."—William Dutton, director of the Oxford Internet Institute

"In Reinventing Discovery, Michael Nielsen introduces us to the new world of the modern scientist, where the Web is amplifying communication and accelerating discovery in unexpected ways, making for extraordinary problem solving. This is a unique and valuable book."—Victoria Stodden, Columbia University