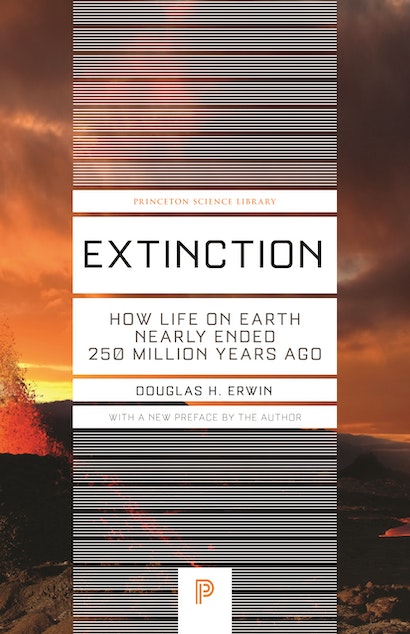 Some 250 million years ago, the earth suffered the greatest biological crisis in its history. Around 95 percent of all living species died out—a global catastrophe far greater than the dinosaurs’ demise 185 million years later. How this happened remains a mystery. But there are many competing theories. Some blame huge volcanic eruptions that covered an area as large as the continental United States; others argue for sudden changes in ocean levels and chemistry, including burps of methane gas; and still others cite the impact of an extraterrestrial object, similar to what caused the dinosaurs’ extinction.

Extinction is a paleontological mystery story. Here, the world’s foremost authority on the subject provides a fascinating overview of the evidence for and against a whole host of hypotheses concerning this cataclysmic event that unfolded at the end of the Permian.

After setting the scene, Erwin introduces the suite of possible perpetrators and the types of evidence paleontologists seek. He then unveils the actual evidence — moving from China, where much of the best evidence is found; to a look at extinction in the oceans; to the extraordinary fossil animals of the Karoo Desert of South Africa. Erwin reviews the evidence for each of the hypotheses before presenting his own view of what happened.

Although full recovery took tens of millions of years, this most massive of mass extinctions was a powerful creative force, setting the stage for the development of the world as we know it today.

In a new preface, Douglas Erwin assesses developments in the field since the book’s initial publication.

Douglas H. Erwin is senior scientist and curator in the Department of Paleobiology at the Smithsonian's National Museum of Natural History. He began researching the end-Permian mass extinction in the early 1980s and has traveled many times to China, South Africa, and Europe seeking its causes.

"Theories and mysteries can be dispelled with good data from the geologic record, and Erwin (a paleobiologist at the Smithsonian Institution's National Museum of Natural History) offers an authoritative account of the search for these data and for the cause of the extinction. . . . Extinction provides a great reference for researchers and the interested lay reader alike."—Andrew M. Bush, Science

"Extinction is a very enjoyable read. . . . It provides a thoroughly up-to-date account of the causes of the end-Permian event and the developments in the field since 1993 as seen through the eyes of one of the key players. . . . Extinction leaves the reader with the (accurate) picture that here is a scientist whose work has significantly advanced our understanding of the greatest extinction event known to science. . . . [A] readable and scholarly account."—Richard J. Twitchett, American Scientist

"Douglas Erwin's geological mystery story is engrossing. It contains a tribute to the scientific method—and also the collaborations of research. The book ends with Erwin warning that the Earth is arguably entering another mass extinction period, this time unnatural and man-made. And this time the destruction may well be total."—Lucy Sussex, The Age

"Douglas H. Erwin, a Smithsonian paleobiologist and one of the leading experts on the Permian extinction has meticulously sifted through the evidence. . . . His accessible new book, Extinction—written, it seems, both to persuade his colleagues and to educate a lay audience—is told from the perspective of a forensic scientist trying to piece together a quarter-billion-year-old crime scene."—Joshua Foer, Washington Post Book World

"Douglas Erwin describes how life on Earth was nearly destroyed at the end of the Permian period, 250 million years ago. . . . The author . . . explain[s] what this paleontological, as well as geological, evidence can tell scientists about the dramatic and deadly shift in the Earth's environment."—Science News

"No one can tell this story better than Douglas Erwin. His book is a superbly written account of what we know about the Permian extinctions. . . . More than a geological story, this book is an excellent model of how science addresses complicated questions."—Choice

"This book does not justify a single, accepted causal sequence of events . . . to account for the end-Permian extinction. Instead, Erwin dissects the evidence for and against each hypothesis, impartially weighing their strengths and weaknesses. Although this book may frustrate readers expecting to learn how life nearly ended 250 million years ago, it will reward them with a fascinating case study in scientific inference, a case that remains very much open."—John P. Hunter, Quarterly Review of Biology

"Erwin's book is science writing for the general public at its best and most lucid. Entertaining, informative, and thought provoking."—Northeastern Naturalist

"Erwin offers a thorough overview of one of the most interesting problems in earth history. . . . Erwin takes the readers on an insider's journey that includes adventures in the field, tedious hours in the laboratory, and stimulating but sometimes contentious exchanges among colleagues at scientific meetings. He gives rigorous consideration to every reasonable hypothesis. . . . Erwin's short course is a professional service for geologists (like me) who have read only some of the primary literature on the end-Permian extinction."—Stephen O. Moshier, Books & Culture

"For scientists as well as general educated readers, this book enlightens its readers to the complexity of the largest biological crisis the earth has yet seen."—H.J.M. Meijer, PalArch's Journal of Vertebrate Paleontology

"I recommend Extinction: How Life on Earth Nearly Ended 250 Million Years Ago to scientists and nonscientists alike. It provides a clear, comprehensive, and compelling introduction to the greatest catastrophe in the history of animal life and proposes a reasonable hypothesis for the cause of the extinction that will undoubtedly be tested vigorously with new data in the coming decade."—Jonathan L. Payne, Complexity

"Douglas Erwin blends careful scholarship and graceful prose in this authoritative elucidation of Earth's greatest mass extinction. Although framed in terms of hypotheses and their tests, Erwin's story unfolds as a gripping who-done-it for the ages."—Andrew H. Knoll, Harvard University, author of Life on a Young Planet

"Douglas Erwin is the world's leading expert on the end-Permian extinction. This book will be the standard reference on this crucial event in the history of life. It is a wonderful example of science in action."—Richard Bambach, Virginia Tech

"This book provides an up-to-date review and critical appraisal of all we know about the end-Permian mass extinction, a subject that has drawn much popular attention. Complementing its solid scholarship, its friendly style enables educated general readers to get to grips with all the current debates."—Paul Wignall, University of Leeds, author of Mass Extinctions and Their Aftermaths