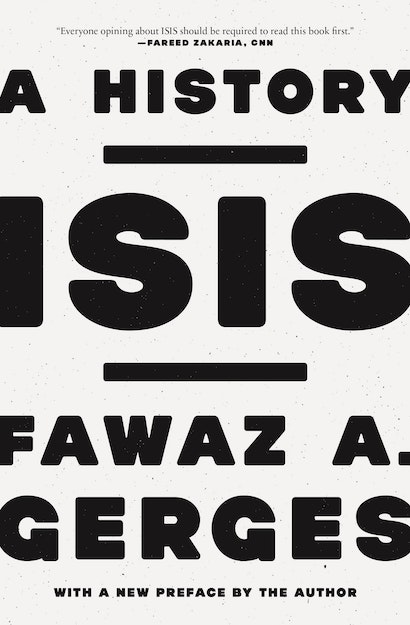 The Islamic State has stunned the world with its savagery, destructiveness, and military and recruiting successes. What explains the rise of ISIS and what does it portend for the future of the Middle East? In this book, one of the world’s leading authorities on political Islam and jihadism sheds new light on these questions as he provides a unique history of the rise and growth of ISIS. Moving beyond journalistic accounts, Fawaz Gerges provides a clear and compelling account of the deeper conditions that fuel ISIS.

The book describes how ISIS emerged in the chaos of Iraq following the 2003 U.S. invasion, how the group was strengthened by the suppression of the Arab Spring and by the war in Syria, and how ISIS seized leadership of the jihadist movement from Al Qaeda. Part of a militant Sunni revival, ISIS claims its goals are to resurrect a caliphate and rid “Islamic lands” of all Shia and other minorities. In contrast to Al Qaeda, ISIS initially focused on the “near enemy”—Shia, the Iraqi and Syrian regimes, and secular, pro-Western states in the Middle East. But in a tactical shift ISIS has now taken responsibility for spectacular attacks in Europe and other places beyond the Middle East, making it clear that the group is increasingly interested in targeting the “far enemy” as well. Ultimately, the book shows how decades of dictatorship, poverty, and rising sectarianism in the Middle East, exacerbated by foreign intervention, led to the rise of ISIS—and why addressing those problems is the only way to ensure its end.

An authoritative introduction to arguably the most important conflict in the world today, this is an essential book for anyone seeking a deeper understanding of the social turmoil and political violence ravaging the Arab-Islamic world.

"A specific, timely, well-rendered exegesis of the unfolding global threat."—Kirkus

"This timely history gives a clear-sighted account of the ascent of the so-called Islamic State (IS)—one with far-reaching implications. The book's findings and conclusions have profound relevance. . . . Written and edited with pellucid clarity, ISIS: A History is an important book that will have broad appeal."—Chris Harmer, LSE Review of Books

"[Written] with energy and clarity, and out of uncommonly extensive knowledge."—Robert Fulford, National Post

"[Gerges's] argument is all at once persuasive, deeply depressing, yet hopeful."—Daniel Flitton, Sydney Morning Herald

"[Gerges's] book is one of the most coherent, comprehensive and persuasive histories of ISIS to date and deserves to be widely read."—Richard Cockett, Literary Review

"[The book's] strength stems from the sheer breadth of the survey offered by Gerges."—Shiraz Maher, New Statesman

"Gerges is clear, and it is here that the book excels, that Isis cannot be explained in isolation but must be examined in the larger sociopolitical context in which it emerged. . . . ISIS: A History makes a welcome contribution to the debate, and will be of interest to both general readers and specialists."—Christina Hellmich, Times Higher Education

"This is quite simply the definitive book on the group by a very smart, well-informed guide to the region, superbly researched, well-written and intelligent throughout. Everyone opining about ISIS should be required to read this book first."—Fareed Zakaria, CNN Global Public Square

"The achievement of Fawaz Gerges. . . in his compelling, insightful book is to highlight the social and sectarian pressures that led so many Iraqi and Syrian Sunnis to turn to Isis as protectors."—Michael Burleigh, Times

"This is a comprehensive account of how ISIS emerged in the Middle East, triggered by the US invasion of Iraq, Syria's civil war, the collapse of the Arab Spring, and sectarian Sunni-Shi'a struggles. Gerges systematically details the complex social and political dynamics leading to ISIS's prominence among the Salafi-jihadist family of rivals. . . . This authoritative, empirically rich study based on primary Arabic sources should be must reading for policy makers, strategists, scholars, journalists, students, and anyone seriously concerned about the human condition."—Choice

"Gerges has made an important contribution to the burgeoning literature on ISIS."—Michael Degerald, Middle East Policy

"This hugely important study is essential reading for anyone who wants to understand the powerful political, sectarian and religious forces currently convulsing the Arab Middle East."—P. D. Smith, The Guardian

"Gerges . . . does an admirable job of locating ISIS within broader contexts of both Middle East societal realities and of prevalent political ideas within the Arab world."—Jonathan Spyer, Middle East Quarterly

"Not just timely but unlikely ever to be bettered, this is an indispensable guide to the evolution of the Arab world's leading terrorist organization by a global expert. Fawaz Gerges's book is judicious, well argued, and based on a close personal acquaintance with conditions in Iraq and Syria. It is unrivaled in its ability to unravel the ideological and political power struggles among ISIS leaders. And it is an often shocking indictment of Western missteps in dealing with the organization's growing capacity to harm foreign interests."—Roger Owen, Harvard University and author of The Rise and Fall of Arab Presidents for Life

Introduction
Taking Hold - A Film Based on Isis: A History