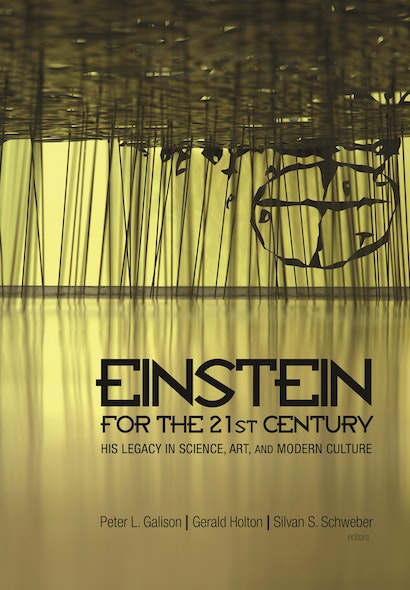 More than fifty years after his death, Albert Einstein’s vital engagement with the world continues to inspire others, spurring conversations, projects, and research, in the sciences as well as the humanities. Einstein for the 21st Century shows us why he remains a figure of fascination.


In this wide-ranging collection, eminent artists, historians, scientists, and social scientists describe Einstein’s influence on their work, and consider his relevance for the future. Scientists discuss how Einstein’s vision continues to motivate them, whether in their quest for a fundamental description of nature or in their investigations in chaos theory; art scholars and artists explore his ties to modern aesthetics; a music historian probes Einstein’s musical tastes and relates them to his outlook in science; historians explore the interconnections between Einstein’s politics, physics, and philosophy; and other contributors examine his impact on the innovations of our time. Uniquely cross-disciplinary, Einstein for the 21st Century serves as a testament to his legacy and speaks to everyone with an interest in his work.

"This book makes an entertaining, engaging and informative effort to tackle a notoriously difficult topic: Albert Einstein's influence on society and culture. . . . [The book] give[s] a rather balanced and authoritative portrayal of the man and his cultural context, while drawing attention to several entertaining sidelights of his life and career."—Daniel Kennefick, American Scientist

"This lovely compendium of essays on Einstein's cultural impact is as stunning in its breadth as Einstein was in his science. Among the book's contributors are such luminaries as Lisa Randall and E.L. Doctorow. Browsing through this book is like eavesdropping on the reminiscences of great artists, novelists, historians, and scientists as they discuss their favorite old teachers. How remarkable, then, that they are all discussing the same man."—Seed Magazine

"Books on Einstein are scarcely in short supply but much of this collection feels fresh, probably because, astonishingly, Einstein's work is still, at the forefront of physics. But it's also because his life touched so many worlds outside science, including nuclear weapons, Nazi Germany, Zionism and the Arab-Israeli conflict, civil rights and the arts."—Andrew Robinson, Financial Times

"A remarkable volume. . . . At turns illuminating and disorientating, this is a book that I can recommend to all those interested in that eternal enigma, Albert Einstein."—Brian Foster, Physics World

"There are many books written about Einstein, but this is one of the most important that this reviewer has ever read. This work clearly articulates the complex nature of this man, his thought, and this overwhelming influence on the cultural identity of much of the world, even though it has been over 50 years since his death."—G. D. Oberle III, Choice

"The book is correctly advertised as speaking 'to everyone with an interest' in Einstein's work; it makes a wonderful gift. It also marks the way toward a gradual transformation of Albert Einstein as he lived into the Mythos Einstein."—Hubert Goenner, Journal for the History of Astronomy

"A stellar array of twenty historians and philosophers, artists and scientists, and writers and critics has contributed to this fascinating examination of Albert Einstein's legacy and its relevance for our times. We are presented with a multifaceted, interpretive effort to understand in novel terms Einstein's science, music, and politics, his relationshipto God and aesthetics, and his unusual position at the divide between a now-vanished world and a future that will surely retain deep traces of his unique contributions and personality."—Diana K. Buchwald, Einstein Papers Project, Caltech

"Whether serendipitously or by design, many of us have found ourselves involved in some aspect of Einstein's multifaceted legacy. This far-reaching volume of personal essays clarifies why Einstein's persona has been so seductive and so meaningful to us all."—Alice Calaprice, editor of The New Quotable Einstein

"Here is the complete Einstein: the physicist, whose many insights and achievements persist at the forefront of modern science; the man, who remained idealistic, philosophically minded, and politically engaged throughout his life; and the iconic visionary, who continues to inspire individual creativity. This is a generous book, rich with detail."—Tony Robbin, author of Shadows of Reality: The Fourth Dimension in Relativity, Cubism, and Modern Thought

"Einstein for the 21st Century is accessible to a broad readership and attractive because its distinguished authors, all experts in their disciplines, cover a very large intellectual space. There are so many fine and interesting contributions that there is something for nearly every potential reader."—Helge Kragh, University of Aarhus, Denmark