A haunting photographic record of extinction 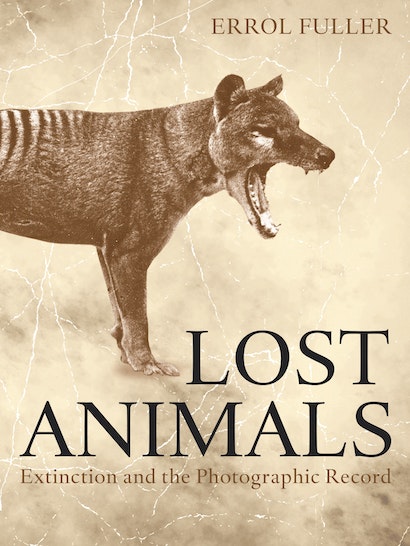 A photograph of an extinct animal evokes a greater feeling of loss than any painting ever could. Often black and white or tinted sepia, these remarkable images have been taken mainly in zoos or wildlife parks, and in some cases depict the last known individual of the species. Lost Animals is a unique photographic record of extinction, presented by a world authority on vanished animals. Richly illustrated throughout, this handsome book features photographs dating from around 1870 to as recently as 2004, the year that witnessed the demise of the Hawaiian Po’ouli. From a mother Thylacine and her pups to birds such as the Heath Hen and the Carolina Parakeet, Errol Fuller tells the story of each animal, explains why it became extinct, and discusses the circumstances surrounding the photography.

Covering 28 extinct species, Lost Animals includes familiar examples like the last Passenger Pigeon, Martha, and one of the last Ivory-billed Woodpeckers, photographed as it peers quizzically at the hat of one of the biologists who has just ringed it. But the book includes rare images as well, many never before published. Collected together here for the first time, these photographs provide a tangible link to animals that have now vanished forever, in a book that brings the past to life while delivering a warning for the future.

Poignant and compelling, Lost Animals also includes a concise introduction that looks at the earliest days of animal photography, and an appendix of drawings and paintings of the species covered.

Errol Fuller is an acclaimed artist and writer, and a world authority on bird and animal extinction. His many books include the award-winning Extinct Birds as well as Dodo: From Extinction to Icon and The Great Auk.

"Erroll Fuller's Lost Animals: Extinction and the Photographic Record is a sad and moving collection of passenger pigeons, heath hens, Tasmanian tigers and other vanished animals. . . . [A] blurry glimpse is still a worthy glimpse when it comes to seeing a number of species in their last moments."—New York Times

"[A] natural history page-turner. . . . In the wrong hands a book like Lost Animals could be a wan march through a morbid family album, and there are certainly moments when the cumulative loss of these creatures seems overwhelming. But Fuller's knowledgeable, compassionate, and occasionally humorous narrative carries the day. . . . It takes a steady guide to lead readers through such territory, and Fuller proves up to the task."—Dianne Timblin, American Scientist

"The indistinct images here, though, are evocative; if they weren't among the last visions of these species, we probably would not pay so much attention to them. But here they are, scores of images, sometimes of low quality, reproduced in a large-format book, along with as much as can be known about how they happened to be taken, and with short histories of the demise of the depicted species. . . . It is a beautiful book; the species deserve to be remembered this way, but they didn't deserve destruction."—Rob Hardy, Columbus Dispatch

"Collected together here for the first time, these photos provide a tangible link to animals that have now vanished forever, in a book that brings the past to life while delivering a warning for the future. The photos, together with the well-written species accounts, including excerpts from writings of the day and reminiscings from firsthand experiences, the book is an excellent piece to have in your library or on your coffee table at home."—Chris West, Southwest Wisconsin Birder

"A fascinating collection of photographs of now extinct animals, many of them unique and not previously published."—Peter Menkhorst, Australian Book Review

"The quality of the photographs ranges from extremely poor to quite incredible but each and every one provides you with a deep connection to the species that's been lost. . . . I would highly recommend this book and hope that the photographs that the author has included will help lead people to understand how important it is to protect our endangered species. . . . If we do not act to save species, his next edition of the book will be much longer."—Nutty Birder blog

"The photographs are often grainy, or poorly framed, or badly lit. But this fact, oddly, is also part of the book's power—the everyday nature of these snapshots somehow hammers home the enormity of the subject matter."—Chris Wright, Boston Globe

"Errol Fuller's new book is a visual lament. Lost Animals is a handsome but sad record of animals that existed for millennia—long enough for photography to be invented—but have now disappeared from the face of the Earth. The images are accompanied by short, evocative texts about the creatures and the naturalists who recorded their existence."—Nancy Szokan, Washington Post

"Lost Animals: Extinction and the Photographic Record reaches into your imagination and draws you closer to the final days of a variety of extinct animals on Earth . . . filled with poignant and powerful first-hand accounts, photographic records, and illustrations."—Gabriel Thoumi, MongaBay.com

"Exceptional . . . the book includes beautiful paintings of the animals in the appendix. But it's the photos—and the stories of each animal—that caused me to read this book cover to cover three times—and stare longingly at each photo."—George Smith, Bangor Daily News

"Here . . . are the last recorded chances of seeing animals not just endangered, but gone forever. It is a beautiful book; the species deserve to be remembered this way, but they didn't deserve destruction."—Rob Hardy, Dispatch

"The macro-causes are always the same, at least since Westerners began to up the pace in the 19th century: some over-hunting (passenger pigeons) and a lot of habitat destruction, of the sort that may yet doom the monarch butterfly. But at the micro-level, as Errol Fuller details in Lost Animals: Extinction and the Photographic Record, the deaths of the last individuals often smacks of contingency or even absurdity."—Brian Bethune, Macleans Magazine

"They are grainy and sometimes out of focus. And if they were of anything else, they'd probably long since have been thrown away. But these pictures are anything but ordinary. For they offer a glimpse of some truly remarkable creatures—now lost to the world forever. . . . Now brought together in Lost Animals, a new book by Errol Fuller, the world's foremost expert on vanished animals, they also offer a stark warning: life can be a very fragile thing."—Hannah Wilkinson, The Lady

"Reading Lost Animals: Extinction and the Photographic Record is a reverential experience. Fuller is absolutely correct about the power of these photographs. I'm thankful that these vestiges of what we've squandered have been preserved, and now made available for all to see."—Grant McCreary, Birder's Library

"Lost Animals is a moving visual elegy to the many animals that humans have ushered into the void."—Fiona Capp, The Age

"Errol Fuller's Lost Animals: Extinction and the Photographic Record (Princeton University Press) calls to mind the sort of commemorative volume that might follow a singular human disaster, such as September 11, which aims to testify to the unique, irreducible existence of each of the victims. But each of the victims in Fuller's book is not an individual at all but a species. Many of his short biographies of the recently vanished are touching, even revelatory. . . . Profound."—Justin E.H. Smith, Chronicle of Higher Education

"Fuller presents photographic images of select extinct bird and mammal species. . . . The photographic record is complemented by a short vignette attempting to contextualize the circumstances surrounding the extinction and in some cases by information about the last known representative animal. . . . The pictures vary widely in quality yet each is compelling as proof of existence for the species. . . . This somewhat depressing book will be of interest to those who enjoy zoological literature."—Diana Hartle, Library Journal

"Lost Animals: Extinction and the Photographic Record is a unique book; it connects us to lost birds and mammals through the medium of their images. It is a book for birders who want to enhance their readings of BirdLife International records and Passenger Pigeon and Ivory-billed Woodpecker histories with an approach that is visual and personal. Reading the stories of these extinct creatures evokes sadness and anger, yes, but, as I said earlier, it also brings out hope. I'm not just talking about the few instances where Fuller says there is the slimmest of slim chances that the bird is not extinct. There is hope because extinction is being witnessed. And remembered. It's a lot harder to ignore conservation campaigns to save habitat when you've seen the 'photographic record' of what happens when you do."—Donna Schulman, 10,000 Birds blog

"The indistinct images, accompanied by informative species profiles reinforce the enormity of the loss; these animals survived long enough for photography to be invented, but then quickly blinked out."—Audubon Magazine

"If ever a book embodied the truth behind the old saying that a picture is worth a thousand words, it is Errol Fuller's new Lost Animals. . . . Lost Animals is not a book to be read cover to cover in one sitting; it should be read one species at a time, with plenty of attention and contemplation given to the remarkable photographs of each one."—John Riutta, Bird Watcher's Digest

"One of the most melancholic tomes I've read. . . . Extraordinary stories and images."—Tim Flannery, Monthly

"The species accounts are engaging, and I can truthfully say that I learned something in every case. The photographs are fascinating and sobering."—Luke Hunter, author of Carnivores of the World