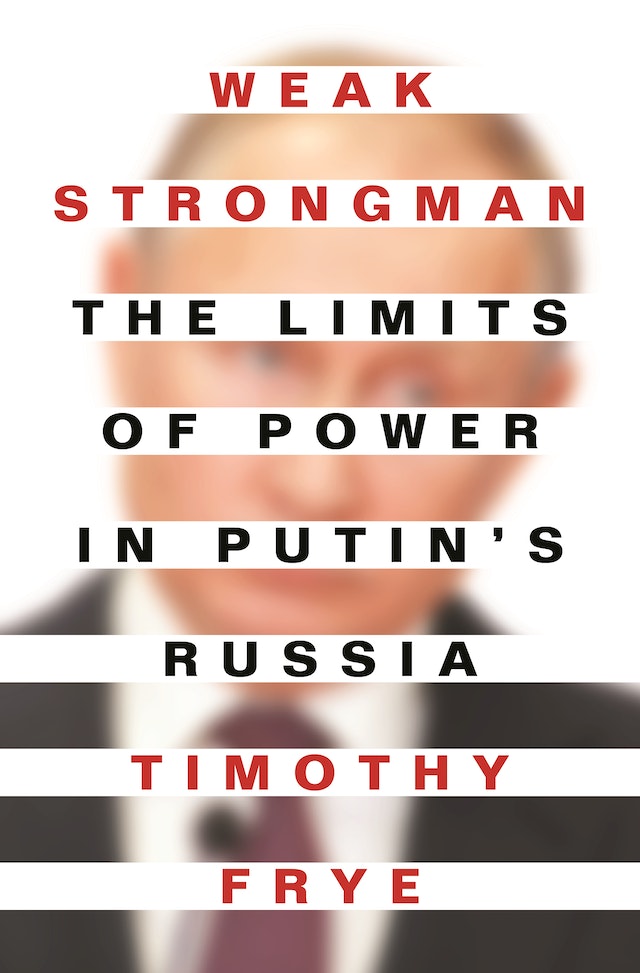 Media and public discussion tends to understand Russian politics as a direct reflection of Vladimir Putin’s seeming omnipotence or Russia’s unique history and culture. Yet Russia is remarkably similar to other autocracies—and recognizing this illuminates the inherent limits to Putin’s power. Weak Strongman challenges the conventional wisdom about Putin’s Russia, highlighting the difficult trade-offs that confront the Kremlin on issues ranging from election fraud and repression to propaganda and foreign policy.

Drawing on three decades of his own on-the-ground experience and research as well as insights from a new generation of social scientists that have received little attention outside academia, Timothy Frye reveals how much we overlook about today’s Russia when we focus solely on Putin or Russian exceptionalism. Frye brings a new understanding to a host of crucial questions: How popular is Putin? Is Russian propaganda effective? Why are relations with the West so fraught? Can Russian cyber warriors really swing foreign elections? In answering these and other questions, Frye offers a highly accessible reassessment of Russian politics that highlights the challenges of governing Russia and the nature of modern autocracy.

Timothy Frye (Ph.D., Columbia, 1997) is the Marshall D. Shulman Professor of Post-Soviet Foreign Policy and Chair of the Department of Political Science. Professor Frye received a B.A. in Russian language and literature from Middlebury College in 1986, an M.I.A. from Columbia’s School of International and Public Affairs in 1992, and a Ph.D. from Columbia in 1997. His research and teaching interests are in comparative politics and political economy with a focus on the former Soviet Union and Eastern Europe. He is the author of Brokers and Bureaucrats: Building Markets in Russia, which won the 2001 Hewett Prize from the American Association for the Advancement of Slavic Studies, and Building States and Markets after Communism: The Perils of Polarized Democracy, which won a Best Book Prize from the APSA Comparative Democratization section in 2010; and Property Rights and Property Wrongs: How Power, Institutions, and Norms Shape Economic Conflict in Russia, which was published in 2017. He has worked as a consultant for the World Bank, the European Bank for Reconstruction and Development, and the U.S. Agency for International Development among others. He is also Director of the International Center for the Study of Institutions and Development at State Research University-Higher Economics School, Moscow.