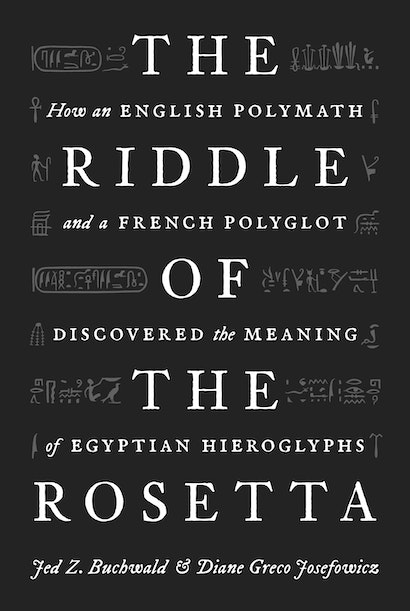 The Riddle of the Rosetta
Available in 3 editions
Buy This

In the summer of 1828, the natural scientist and physician Thomas Young spent an afternoon with Jean-François Champollion, the scholar who, six years earlier, had announced a system for reading Egyptian hieroglyphs, considerably complicating Young’s preceding efforts to do the same thing. For seven hours, Champollion guided his English visitor through his papers and the Egyptological items under his care at the Louvre. This pleasant meeting, which would be their last, was hardly the clash of two embittered rivals—yet their relationship has often been described that way.

Were they really rivals? To be sure, both men chased the same goal, and they did so from opposed points of view. But enmity doesn’t necessarily follow from opposition. A closer look seems warranted.

We might put their differences biographically: Their backgrounds differed in important ways. A generation older than Champollion, Young hailed from a well-connected Quaker family keen to propel a talented son into Georgian high society. Corresponding attitudes shaped his views of writing and ancient Egypt. An idealized form of Greek provided the model for written expression, and the possession of an alphabet marked a culture’s sophistication. And though Young eschewed his family’s Quakerism, residues persisted in his contempt for the religion of Pharaonic Egypt, which he disdained as zoomorphic idolatry.

Champollion’s early life was much more chaotic. Born in 1790, Champollion was the youngest child in a family headed by a domineering father with a taste for drink and a willingness to incur ruinous debts. Growing up after the French Revolution, he became a fiery Bonapartist who narrowly avoided execution when the political tide turned back toward the royalists. The Egyptian scripts promised release from these concerns and access to a world that Champollion wanted deeply to understand. “What a distraction, indeed, for the heart and soul is a grammar that is more than six thousand years old!” Champollion enthused to a friend, writing from the remote village of Figeac, in southeast France, where he was exiled as punishment for anti-royalist activities.

Young first came to grips with the Egyptian scripts in 1814 while summering at Worthing, the seaside town where he had followed his patients to escape the city’s heat. As he worked, he corresponded with Antoine Isaac Sylvestre de Sacy, a prominent pro-royalist Parisian scholar. Although de Sacy would not follow all of Young’s insights, he encouraged him by noting just how much further along he was than Champollion—who had been de Sacy’s student not long before. Champollion’s liberal politics irritated de Sacy, who held him in correspondingly low esteem. “If I have one counsel to give you,” de Sacy warned Young, “it is not to communicate too much of your discoveries to Champollion. It could happen that he would then claim priority.”

Around this time, Young and Champollion began to correspond. Champollion made the first move. He did need allies. Although he was virtually unknown, he had already accumulated adversaries among a coterie of specialists. Presently serving as the Royal Society’s foreign secretary, Young promised to be a powerful counterweight if suitably cultivated.

The exchange was at first cordial. Champollion sent Young copies of his recently published L’Égypte sous les Pharaons and flattered him by soliciting advice regarding an indistinct area of the Rosetta inscription. Young, equally politely, expressed thanks and provided the clarification requested. Eventually fissures appeared. The most threatening opened around the question of phoneticism. Young never accepted that phoneticism had pre-dated Greco-Roman times in Egypt. Champollion also resisted the idea for many years. But he eventually came to a phonetic view of the ancient Egyptian scripts, and one of his routes to this position was via Coptic, the liturgical language of the Coptic Orthodox Church in Egypt.

Like most French scholars of ancient Egypt, Champollion believed that remnants of the ancient language could be found in Coptic; the question was how to use Coptic to elucidate the scripts. For Young, however, Coptic’s relationship to ancient Egyptian was tenuous at best. Seeing Coptic merely as a language of late pre-Islamic Egypt, he rejected its utility for investigations of pre-Alexandrian texts.

By 1822, when Champollion presented the elements of his system for reading hieroglyphs in the Lettre à Dacier, he was convinced that the scripts had always been phonetic. But this conviction, which he would soon fully develop, was not so completely expressed that Young could not see his own influence in the Lettre. Young responded favorably, though he positioned Champollion as his talented acolyte, who “has lately been making some steps in Egyptian literature, which really appear to be gigantic … [for] even if he did borrow an English key, the lock was so dreadfully rusty, that no common arm would have had strength to turn it.”

The sinologist John Barrow took a considerably harsher position, publishing a scathing review of the Dacier letter in the pages of the Quarterly Review—a publication in which Young also published. That issue also contained notice of a forthcoming volume titled An Account of Some Recent Discoveries in Hieroglyphical Literature and Egyptian Antiquities. Including The Author’s Original Alphabet. — to which was appended “as extended by Mr. Champollion.”

Champollion was not expecting this. Young certainly had not warned him. The provocative title, Champollion fumed to Young, “promises to indicate the first author of an alphabet that I would only have extended.” Waxing angrier, he continued, “I will never consent to recognize any other original alphabet than mine when it concerns the hieroglyphic alphabet properly speaking,” which, of course, muddied the waters concerning what, if not the elements of an Egyptian alphabet, Young claimed to have discovered.

Contact between the two ceased for years. Both avoided public conflict while friends maneuvered in the shadows as partisan proxies. Young’s supporters pressed him to pursue a case against Champollion; Champollion fanned the flames by being stingy with credit, even when it came to acknowledging Young’s real advances in the decipherment of Greco-Roman names.

Despite the drama we’ve just described, we resist wholly dissolving our understanding of the pair in the acid of competitive strife. That marathon afternoon in Paris remains in view. Surely Young, who left the meeting invigorated, sensed the power of Champollion’s work, even if he did not, and likely could not, accept its implications. Perhaps some differences just can’t be reconciled. What remains is the arc of a remarkable relationship—an intricately choreographed pas-de-deux ending, possibly inevitably, with an explosive rupture followed by a silence broken at long last by conversation about what excited them both—the work itself.

Jed Z. Buchwald is the Doris and Henry Dreyfuss Professor of History at the California Institute of Technology. His books include The Creation of Scientific Effects: Heinrich Hertz and Electric Waves. Diane Greco Josefowicz is a writer, editor, and activist living in Providence, Rhode Island.