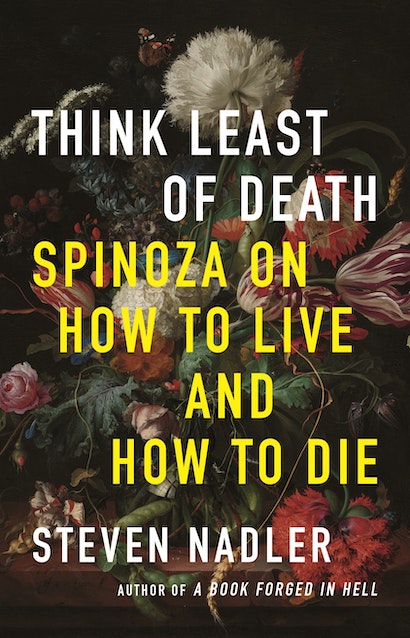 Think Least of Death
Available in 3 editions
Buy This

Every day billions of people devote a significant amount of time to worshiping an imaginary being. More precisely, they praise, exalt, and pray to the God of the major Abrahamic religions. They put their hopes in—and they fear—a transcendent, supernatural deity that, they believe, created the world and now exercises providence over it.

In the prophetic writings of Judaism, Christianity, and Islam, this God appears endowed with familiar psychological and moral characteristics. He—the Abrahamic God is typically conceived as masculine—has knowledge, perception, intention, volition, and desire, and He experiences emotions such as jealousy, disappointment, pleasure, and sadness. God is powerful and free, unconstrained in His omnipotence. He issues commandments that He expects to be fulfilled, and He exercises harsh judgment over those who fail to obey them. God is also good, benevolent, and merciful, and the providential plan conceived and pursued by God is grounded in wisdom and justice.

This all-too-human God does not exist, or so argues the seventeenth-century philosopher Bento de Spinoza.1 Such a divinity is a superstitious fiction, he claims, grounded in the irrational passions of human beings who daily suffer the vicissitudes of nature. Feeling lost and abandoned in an insecure world that does not cater to their wishes and yet, at the same time, finding in that world an order and convenience that seems more than accidental, they imagine a governing Spirit that, on the model of human agency, directs all things toward certain ends. Here is how Spinoza describes the common psychological process:

They find—both in themselves and outside themselves—many means that are very helpful in seeking their own advantage, e.g., eyes for seeing, teeth for chewing, plants and animals for food, the sun for light, the sea for supporting fish. Hence, they consider all natural things as means to their own advantage. And knowing that they had found these means, not provided them for themselves, they had reason to believe that there was someone else who had prepared those means for their use. For after they considered things as means, they could not believe that the things had made themselves; but from the means they were accustomed to prepare for themselves, they had to infer that there was a ruler, or a number of rulers of nature, endowed with human freedom, who had taken care of all things for them, and made all things for their use.2

A comforting thought indeed, but no more true for the consolation it brings. Such people “who feign a God like man . . . wander far from the true knowledge of God.” There is no transcendent deity; there is no supernatural being, no being who is separate or different from or beyond Nature. There was no creation; there will be no final judgment. There is only Nature and what belongs to Nature.

The word ‘God’ is still available, even useful, particularly as it captures certain essential features of Nature that constitute (at least among philosophers in Spinoza’s time) the definition of God: Nature is an eternal, infinite, necessarily existing substance, the most real and self-caused cause of whatever else is real. (Spinoza defines ‘substance,’ the basic category of his metaphysics, as “what is in itself and conceived through itself,” that is, what has true ontological and epistemological independence.) Thus, God is nothing distinct from Nature itself. God is Nature, and Nature is all there is. This is why Spinoza prefers the phrase Deus sive Natura (“God or Nature”).

Early in his philosophical masterpiece, the Ethics, Spinoza says that “whatever is, is in God,” and “from the necessity of the divine nature there must follow infinitely many things in infinitely many ways.”3 All things, without exception, are in and a part of Nature; they are governed by the principles of Nature and brought about by other natural causes. Spinoza can be read either as a pantheist—and historically this seems to be far and away the most common interpretation—or as an atheist, as some of his most vehement critics (and fans) have done. Either way, what is non-negotiable is the denial of the personal, anthropomorphic Abrahamic God.4

It follows that there is, and can be, no such thing as divine providence, at least as this is typically understood. Everything that happens in Nature and by Nature’s laws happens with blind, absolute necessity. Every thing and every state of affairs is causally determined to be as it is. Neither Nature itself nor anything in Nature could have been otherwise. As Spinoza puts it, “In nature there is nothing contingent, but all things have been determined from the necessity of the divine nature to exist and produce an effect in a certain way.”5 In Spinoza’s view, this is not the best of all possible worlds; it is not even one among many possible worlds. This is the only possible world. “Things could have been produced by God in no other way, and in no other order than they have been produced.”6

Needless to say, there are not, and cannot be, miracles, understood as divinely caused exceptions to the laws of nature. It is not just that miracles are highly unlikely or difficult to detect—they are metaphysically impossible. Nature cannot possibly contravene its own necessary ways. Events we take to be miraculous are simply those of whose natural causal explanation we are ignorant. “Nothing happens in nature which is contrary to its universal laws. . . . The term ‘miracle’ cannot be understood except in relation to men’s opinions, and means nothing but a work whose natural cause we cannot explain by the example of another familiar thing, or at least which cannot be so explained by the one who writes or relates the miracle.”7

Teleology, too, is a fiction.8 There are no purposes for Nature and no purposes in Nature. Nature itself does not exist for the sake of anything else, and nothing is directed by Nature toward any end. Whatever is, just is; whatever happens, just happens (and had to happen). Neither the universe itself nor anything in the universe was created to achieve some goal.

What is true for teleology is also true of moral and aesthetic values. Nothing is good or bad or beautiful or ugly in itself. “As far as good and evil are concerned, they also indicate nothing positive in things, considered in themselves, nor are they anything other than modes of thinking, or notions we form because we compare things to one another.”9 God did not create the world because it was good; nor is the world good because God created it. Again, whatever is, just is and had to be as it is, period.

Such is the universe that Spinoza describes and establishes through the “geometrical method”—a series of definitions, axioms, demonstrated propositions, corollaries, and scholia—in the metaphysical parts of the Ethics. It seems, on the face of it, a rather bleak picture, one worthy of the most radical form of nihilism.

But there is more.

The inviolable necessity of Nature governs not only the world of physical bodies—where apples fall from trees and rocks roll down hills—but also the domain of human activity, including whatever happens in the human mind. Thoughts, ideas, intentions, feelings, judgments, desires, even volitions—our everyday acts of willing and choosing—are all as strictly necessitated by the laws of thought as bodies in motion are by the laws of physics. Indeed, Spinoza boldly proclaims in the beginning of Part Three of the Ethics, where he turns to human psychology, “I will treat the nature and powers of the emotions, and the power of the mind over them, by the same method by which, in the preceding parts, I treated God and the mind, and I shall consider human actions and appetites as if it were a question of lines, planes and bodies.”10 One mental act or psychological event follows another with the same necessity and deductive certainty with which it follows from the nature of the triangle that its interior angles add up to 180 degrees. In the mind, no less than among bodies, a strict causal determinism rules, and nothing could have been otherwise than as it is.

This means that there is no such thing as freedom of the will. The idea that what one wills or desires or chooses is a kind of spontaneous act of mind—possibly influenced by other mental items, such as beliefs or emotions, or states of the body, but by no means absolutely determined by them—is an illusion. “All men are born ignorant of the causes of things. . . . [They] think themselves free because they are conscious of their volitions and their appetite, and do not think even in their dreams, of the causes by which they are disposed to wanting and willing, because they are ignorant of those causes.”11 There is, to be sure, a kind of freedom available to human beings, and it is in our best interest to strive to attain it; this is what the Ethics is all about. But human freedom does not, and cannot, consist in the classic capacity to have chosen or willed or acted otherwise than as one did. “In the mind, there is no absolute, or free, will, but the mind is determined to will this or that by a cause which is also determined by another, and this again by another, and so to infinity.”12

There is no point in lamenting any of this—the demise of a providential God, the emptying of the world of all meanings and values, our loss of free will—or wishing things were different (since they could not possibly be different). To spend one’s life in a state of passive resignation or bewailing one’s fate and cursing Nature for the hand one has been dealt is not only a waste of time, but irrational and harmful. It is, in effect, to suffer, and to be (in Spinoza’s word) a “slave” to the passions.

But what is the alternative? Is there, within that eternal, infinite, necessary, deterministic, and meaningless world, a way for finite, mortal beings such as we are, subject to the slings and arrows of outrageous fortune, to flourish? When there is no wise, just, and providential God directing things to some end, when everything is governed by an inviolable, lawlike necessity and nothing could have been otherwise, can we nevertheless hope to achieve, through our own resources and effort, a life of well-being, even “blessedness” and “salvation”?

It is precisely this question that moved Spinoza, around the time of his herem (ban or excommunication) from the Amsterdam Portuguese-Jewish community, to abandon the life of a merchant and begin investigating that deepest and most important of moral inquiries: what is human happiness and how can it be achieved?

This is an excerpt from Think Least of Death: Spinoza on How to Live and How to Die by Steven Nadler.

Steven Nadler is Vilas Research Professor and the William H. Hay II Professor of Philosophy at the University of Wisconsin–Madison. His many books include Rembrandt’s Jews, which was a finalist for the Pulitzer Prize, Spinoza: A Life, and (with Lawrence Shapiro) When Bad Thinking Happens to Good People: How Philosophy Can Save Us from Ourselves (Princeton).

1. Bento was Spinoza’s given name in the Portuguese-Jewish community of Amsterdam. Baruch was the Hebrew name used in the synagogue, and Benedictus is the Latin version of his name that appears in his published writings. All three names mean “blessed.”

8. The place of teleology in Spinoza’s philosophy is a topic of much discussion. For attempts to find a role for it in his system, see Garrett (1999) and Lin (2006b).