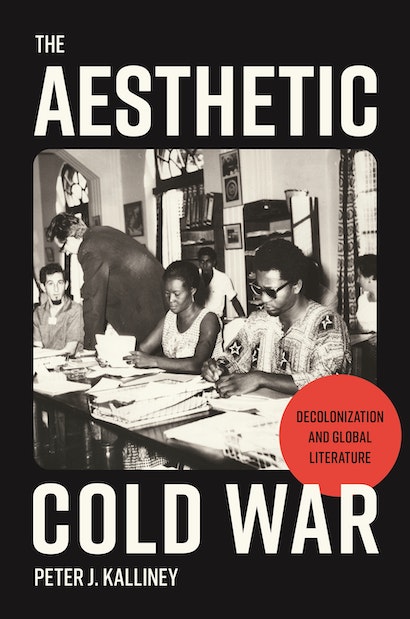 The Aesthetic Cold War
Available in 2 editions
Buy This

In “Africa and Her Writers,” a feisty Chinua Achebe begins by proclaiming, “Art for art’s sake is just another piece of deodorized dog shit.” The joke, of course, comes at high modernism’s expense, and he was neither the first nor the last figure from decolonizing regions of the world to rail against writing for a privileged few. I do not know the reaction of his audience at Harvard University, where he originally delivered these remarks in 1972, but Achebe himself performed as if he knew the ghost of alumnus T. S. Eliot would be among the listeners.[i] He laments that at some point in “the history of European civilization the idea that art should be accountable to no one, and needed to justify itself to nobody except itself, began to emerge.” Artists themselves abandoned the principle that art fills specific human needs, rejecting the idea that literature ought to answer to a wider reading public. “Words like use, purpose, value,” he summarizes, “are beneath the divine concerns of this Art” (30). “Africa and Her Writers” offers a pointed synopsis, or caricature, depending on one’s perspective, of what scholars call aesthetic autonomy. For Achebe, this theory of artistic freedom is a distinguishing feature of European literary development—or of European literary decline—providing one more piece of evidence that the rest of the world should think carefully before following their example.

A more succinct recapitulation and repudiation of modernism’s aesthetic theories would be difficult to find. Achebe insists, against these snobs, “that art is, and was always, in the service of man” (29). For many years, Achebe’s readers tended to see his work in precisely this way, as he represents it here: straightforward, where the metropolitan modernists prefer indirection; committed instead of aloof; pragmatic and utilitarian, not esoteric and self-contained; solicitous of broad audiences rather than chasing the approbation of an elite. The most current generation of scholars, myself included, has questioned this neat antithesis, but we ought to remember that this way of positioning his work in the global literary field is authorized by Achebe himself, at least in moments such as these. To regard the work of Achebe and the writing of his many peers from the decolonizing world as contiguous and compatible with metropolitan modernism, one must sometimes read these figures against themselves.

If we turn away from “Africa and Her Writers” at this early juncture, however, we miss the full significance of the great Nigerian’s aesthetic contrasts. Metropolitan modernists are not his only concern in this essay. Another camp of European writers, appropriately enough, rejects aesthetic autonomy in terms no less damning. This group—congregating further east in Europe, or on the other side of the same literary hill, to use Achebe’s metaphor—begins with the proposition that “a poet is not a poet until the Writers’ Union tells him so.” Not content with peaceful coexistence, each tribe has gone out of its way to antagonize the other: “Between these two peoples, an acrimonious argument rages. […] Monstrous philistines! Corrupt, decadent! So loud and bitter does the recrimination become that it is often difficult to believe that these two peoples actually live on two slopes of the same hill” (31). The high modernists in one camp, the Party’s advocates of socialist realism in the other, but both groups are unmistakably European all the same. Despite employing words as simple as use, purpose, and value to describe his own writing, Achebe is no more sanguine about the “Writers’ Union” approach to literary production than he is enamored of modernist autonomy. Again, working by way of shorthand caricatures, Achebe tells us that the dreary, predictable, administered world of state-sanctioned literature represents no better alternative than metropolitan modernism for the emerging talents of Africa. A curse on both these European houses, Achebe says! Writers from decolonizing areas ought to be wary of reproducing the excesses of Europe’s leading aesthetic theories.

Before concluding with a consideration of the poetry of Christopher Okigbo, Achebe’s friend and recently deceased countryman, the essay pauses to give us a glimpse of how the world’s system of literary production appears from the perspective of a midcentury African writer. “As African writers emerge onto the world stage, they come under pressure to declare their stand,” Achebe reports. A stand on what issue, we might ask: on imperialism and neocolonialism, on racism as an endemic international problem, on the use of European languages in postcolonial literature, all of which he considers in detail elsewhere? No. In “Africa and Her Writers,” Achebe describes a world literary system in which writers, European and African alike, are expected to declare their allegiances in what I call the aesthetic cold war. Outlining one’s position in the “recrimination between capitalist and communist aesthetics in our time” is, Achebe considers, the most urgent question African writers must answer if they wish to find audiences both within and beyond national borders (32). Achebe’s sense that African writers are walking onto a “world stage” is every bit as significant as his complaints about an aesthetic divide: it was during the middle decades of the twentieth century that one could begin to talk, realistically, about the field of literature in English including both writers and readers from colonial and postcolonial regions.

Both the United States (and to a lesser extent its western European partners) and the Soviet Union (and to a degree, its inconstant allies such as China and Cuba) actively supported writers from sub-Saharan Africa, the Middle East, south Asia, southeast Asia, the Caribbean, and Latin America. Cultural diplomacy, or soft power, complemented the armaments race: each side battling for proverbial hearts and minds, especially for the loyalty of writers and intellectuals in the decolonizing parts of the world. For the United States and the Soviet Union, part of this task involved packaging their own talent for export. Musical performers, dancers, art exhibitions, libraries, book tours, and other cultural goodwill programs were staples of US, British, French, Soviet, and Chinese cultural diplomacy throughout much of the century.[ii]

This kind of programming was enhanced by recruitment of intellectual allies in the decolonizing world. Both the United States and the Soviet Union sponsored literary conferences and prizes, magazines, book publishing, libraries, arts centers, drama, music, and radio programs featuring artists and intellectuals from the decolonizing world. Often, such programs were open about the nature of the sponsorship: the Soviets were widely recognized for their support of Lotus magazine and its prize, while the US Information Agency was clear about its involvement in the career of Eileen Chang and other writers. In some instances, however, sponsorship could be clandestine, as in the Central Intelligence Agency (CIA) covertly bankrolling the Congress for Cultural Freedom, which had a formative influence on the emergence of African literature in English. Cultural diplomacy did not always work as we might expect it to work—that is, writers from decolonizing parts of the world did not become cold war partisans simply because they were beneficiaries of US or Soviet patronage. In fact, many writers, including Achebe, were happy to receive accolades and tangible support from both sides.

In addition to cultural diplomacy, however, superpower competition affected literary life in the decolonizing world because the cold war’s most powerful states, as well as the governments of postcolonial nations, resorted to surveilling, blacklisting, censoring, imprisoning, and expelling writers of diverse political beliefs. The disciplining of intellectuals among the Warsaw Pact states is an old story, limited in some ways because its telling is so often partisan. Intimidation of writers was commonplace in the capitalist democracies as well as in the postcolonial nation-states of Africa and Asia, with the practice in no way limited to Soviet or Chinese areas of influence. This fact is generally known, but its effect on the literature of decolonization has not been considered in any depth. As William J. Maxwell, James Smith, and Mary Helen Washington have shown in some detail, the Federal Bureau of Investigations (FBI) in the United States and MI5 (Security Service) and MI6 (Secret Intelligence Service) in the United Kingdom kept tabs on many intellectuals, especially queer and African diasporic writers.[iii] C.L.R. James, Claudia Jones, Doris Lessing, and the All-India Progressive Writers’ Association were some of the individuals and groups scrutinized by British intelligence; James and Jones were both detained and then deported from the United States as political undesirables. Being a fierce anti-Stalinist and critic of Soviet Communism, as James was, did not make him any more palatable from the perspective of the US government. Postcolonial states do not have a better record: Faiz Ahmed Faiz, Sajjad Zaheer, Rajat Neogy, Ngũgĩ wa Thiong’o, and Wole Soyinka, to name only a few, all ran afoul of the authorities after independence for their nations. Apartheid-era South Africa, which does not fit easily into the model of colonial dependency or postcolonial nation-state, made life extremely difficult for many of its intellectuals, such as Ruth First, Alex La Guma, and Es’kia Mphahlele. The flip side of cultural diplomacy, then, is the harassment, intimidation, and coercive pressures that established and nascent states employed in attempts to contain or marginalize dissident writers.

As with cultural patronage, however, collecting intelligence on writers, even banishing or imprisoning them, did not always produce the effects intended by the governments responsible. Far from containing a figure such as Lessing, already living in exile, routine surveillance seemed to whet her intellectual appetite. Some writers could take it as a sign of their own significance that they were worth monitoring. Others who were objects of state surveillance, such as Richard Wright, collaborated with security and intelligence operations when they believed it was in their interest to do so. Imprisonment of writers most certainly altered the development of postcolonial literature—how many texts were stillborn we will never know—but writers contested this practice by cultivating transnational, nonaligned networks of their own. Similar to cultural diplomacy, the fate of persecuted writers was a matter of fierce cold war rivalry, in which national governments, from the powerful to the weak, were prone to criticize one another by pointing to abuses in other states. Writers seized on such animosities. Jailing intellectuals encouraged writers to see themselves as part of an international guild of dissidents, refusing to recognize the cold war’s geographical boundaries and ideological allegiances. In stark contrast to our times, when literary intellectuals freely acknowledge their insignificance to the workings of the state, the cold war was a period when writers mattered, when they were important enough for large governments to patronize them, to collaborate with them, to censor them, and even to imprison, banish, or kill them.

Peter J. Kalliney is the William J. and Nina B. Tuggle Chair in English at the University of Kentucky. His books include Cities of Affluence and Anger, Commonwealth of Letters, and Modernism in a Global Context.