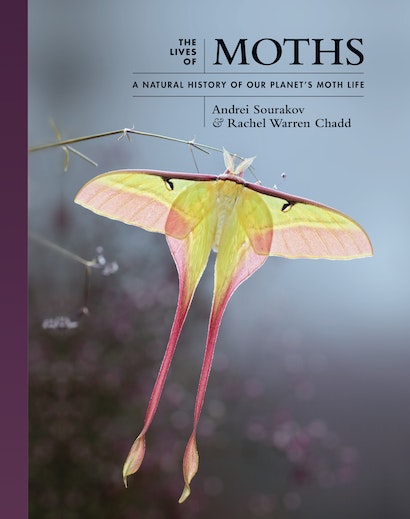 The Lives of Moths
Available in 2 editions
Buy This

While butterflies may get more press than moths, Andrei Sourakov and Rachel Warren Chadd reveal that the lopsided attention is unjust. Their book, The Lives of Moths looks at the remarkable world of these amazing and beautiful creatures.

Your book The Lives of Moths is exclusively dedicated to moths. Why did you choose this subject, and where can moths be found?

AS: Moths are fascinating and beautiful, but few people know that, and I wanted to share this with a much broader audience. Moths are also numerous; there are more than 150,000 species of them on Earth, over 10,000 in the US alone, and they are everywhere. They can be in your pantry or at your porch light. They can be sitting on the bark of any tree in your garden, but they are invisible as they are masters of camouflage—blending in with their surroundings. They can breed in the fur of a sloth, or develop underwater in a pond. Moths can live as far north as the Arctic circle, or in deserts, where they may be developing inside a cactus and flying only at night or only occasionally after it rains. They can even thrive in an animal burrow. As caterpillars, they don’t necessarily nibble on plants; some species can feed on a tortoise shell or on the horns and hoofs of dead animals and on dung. Recently, I even had two moth species, more then 70 individuals, emerge from a wasp nest that I found in my backyard. Yes, some moth species can be predators of stinging wasps! But most commonly, of course, you find them in forests and meadows.

How does your book differ from other books about moths?

RWC: We focused on moths living in different biomes and habitats, taking a broader, global view of these insects. First, we described their remarkable biology, their life cycle, and how they interact with each other and their enemies, but then explored in detail how different species have adapted over millennia to survive and thrive in remarkably different environments. So, this is quite a different approach, but what also makes this book stand out and brings all this information to vivid life are the more than 300 beautiful photographs of moths and explanatory drawings.

Your book is indeed very colorful, with frequent full-page photos of beautiful moths, but it is also filled with numerous, up-to-the-minute scientific facts. What kind of audience were you addressing when you were writing it?

AS: I was very lucky to be able to really, in the words of John Steinbeck, “write for the audience of one.” Steinbeck may have meant that he was writing for himself and without having to worry about pleasing various audiences, but in my case, it is more literal. I had the pleasure and privilege of working with Rachel, whom by the way, I have never met, but with whom I had earlier worked on a monumental 656-page Book of Caterpillars published in 2017 by University of Chicago Press. So, I had a great respect for Rachel from this experience, and when together we took on writing The Lives of Moths, I basically wrote for her. We must have exchanged over 1,000 emails, but we have never spoken or seen each other, separated by the Atlantic Ocean: I am in Florida, and she is in the UK. So we are, what they call, “pen pals.”

RWC: And I had the pleasure of being deluged with a mass of fascinating facts from Andrei who is both highly knowledgeable and passionate about his subject—all a bit overwhelming at first, but then Andrei and I worked together to shape the text for the widest possible audience. What I always try to do is tell a story that will hold people’s attention. Here the aim was to interest scientists and the general public alike, which I hope we have achieved by ensuring that the text is well researched but also accessible and lively enough to attract youngsters and anyone who wants to learn more about these striking members of the insect world.

What was one of your favorite moments during this project?

AS: You mean, other than receiving a copy of the printed book, which, of course, was incredibly rewarding? Actually, it was a sudden realization that I still have lots to learn about moths. This struck me when I was chatting with a friend between games during a tennis match and mentioned writing this book. And he asked: “So, are there moths that eat carnivorous plants?” So, I said to myself: “He’s is a medical doctor, knows very little about moths, and the first question he asks me—I don’t have an immediate answer to!” So, it turned out—yes, there are some amazing moths that feed on carnivorous plans, so we added a section to our book about them.

What about you, Rachel, do you have a favorite moment?

RWC: I think it’s when I saw how well the text and images were coming together—which was, of course, also thanks to project editor Caroline Earle and designer Wayne Blades, as well as our efforts. That realization—wow, that really works—makes it all worthwhile.

If I wanted to observe moths in my backyard, what should I do?

AS: While attracting moths to light is the oldest and most proven way, it may have a negative effect on moths because light disorients them, and also they can easily fall prey to birds and lizards in the morning, if the light stays on all night. The best way, in my opinion, is to have as many native plants in your garden as you can. If you do, inevitably you will have caterpillars feeding on them. You can raise some of these caterpillars through to the adult stage, watching them change at each instar and through metamorphosis, and then have the pleasure of seeing them eclose and fly away. This way you will be able to learn not only what species of moths you have in your yard, but you will also be able to record and understand their biology as well as contribute to their conservation.

In every one of the 5 chapters that focus on a specific habitat, you mention threats moths face. Why put this doom-and-gloom in a book that’s seemingly directed at promoting the beauty of and science behind these small little-known creatures?

RWC: We felt that moths, like all other creatures are not only crucial to our survival as humans, but also are so beautiful and interesting that they deserve a place on this planet like every other species, and it will be a real shame if any of them disappear from the face of the Earth. Each of the species we featured in our book took millions of years to evolve, but now they are disappearing at a staggering, frightening rate. So, we hope that from our book more people will realize the need to preserve them. Yet another compelling reason to do all we can to combat climate change.

AS: And there is hope, the trend is reversable. Protecting elephants and rhinos may be hard and costly, though I truly hope that they too will be protected from extinction. But protecting insects, the group of organisms that allows us to live and eat by pollinating our crops, is not only crucial but also relatively easy. All we need to do is change some of our cultural practices. We should create insect-friendly habitats in every yard, around every playground, in every park. We should reduce our compulsion for planting exotic ornamental plants and maintaining millions of hectares of lawns, which are ecological deserts. Instead, we should allow the wild back into our lives by recognizing that this is essential for our own self-preservation. To continue our present path of developing every meter of land for housing and agriculture is suicidal. While developing as a species, we need to let other species live too, because without them we too will go extinct.

Finally, how did you become interested in moths and what led you to write this book?

AS: I have been fascinated by insects since I can remember. Growing up, I read books about insect lives by naturalists such as Jean-Henri Fabre. Among all insects, I always liked moths for their incredible diversity of wing patterns and also because of their metamorphosis. Moths go through 4 different stages that are so unlike each other in appearance and behavior that it is like studying four different animals but creatures whose lives are intimately connected. Since the time when, many years ago, I finally became a professional entomologist, I’ve studied many different aspects of moth biology, trying to understand their complex relationships with plants, predators and parasites. I’ve even worked on their biological control in agricultural fields.

RWC: For me, it was quite a revelation. As Andrei mentioned, I’d edited and project-managed an earlier book about the caterpillars of some 600 moth and butterfly species—so I knew how remarkable these insects are at their larval stage and the miracle of metamorphosis. We have relatively few species in the UK—over 2,500 but a fraction of the world’s 150,000 and mostly night-flyers. So, what I hadn’t fully appreciated was the beauty, variety, and intriguing lives of so many moth species in different environments—which Andrei’s extensive knowledge has helped reveal.

Andrei Sourakov is the collections coordinator for the McGuire Center for Lepidoptera and Biodiversity at the Florida Museum of Natural History. He has been studying moths for more than forty years. Rachel Warren Chadd is a writer and editor. Her books include Birds: Myth, Lore, and Legend. Together, they previously worked on The Book of Caterpillars as contributor and editor, respectively.