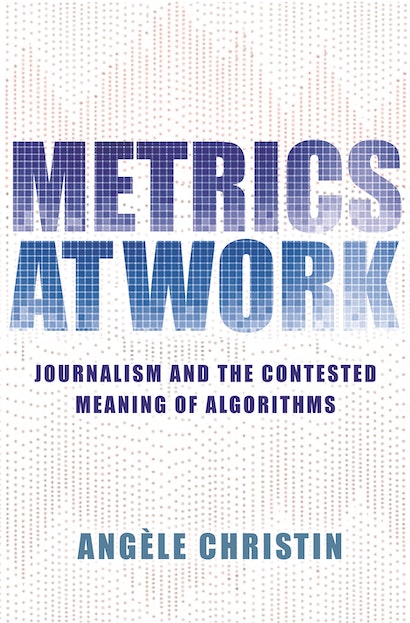 Metrics at Work
Available in 3 editions
Buy This

During the COVID-19 pandemic more than ever, digital platforms and news websites have become a lifeline for information and interaction for people isolated from face-to-face contact. In Metrics at Work: Journalism and the Contested Meaning of Algorithms, Angèle Christin goes behind the scenes of our screens, analyzing how news production changed as it moved online. She shows how new measurements of online popularity such as clicks, likes, tweets, and others, are transforming how journalists work, in complex and sometimes counterintuitive ways. How do these audience metrics affect the kind of news that is published online? Angèle Christin answered our questions.

What drove you to write the book?

AC: I was interested in the impact of the digital revolution on news production. At a time when advertising revenues were falling and secure employment in news organizations was becoming increasingly rare, many media observers criticized what they saw as a decline in news quality towards “clickbait” and superficial content. I wanted to analyze this problem as an ethnographer, without normative preconceptions, and understand how journalists and editors were changing their editorial practices to adjust to the digital rules of the game. Between 2011 and 2015, I spent most of my days interviewing journalists and spending time in web newsrooms, observing how journalists and editors were working. Over the course of this fieldwork, I observed that how some, but not all, journalists fixated on audience metric—clicks, likes, tweets, and so on—as a measure of the relevance of their articles. This became the central thread that I followed in the book.

You focus on web newsrooms in the United States and France. Why this comparison?

AC: Most scholarship on digital media currently focuses on the United States. I wanted to decenter the analysis by comparing the American case to another country. I was born and raised in France and knew that the media landscape there was different from the American one, not only because of the role of public subsidies to support media outlets, but perhaps more importantly because journalists in France still often see themselves as intellectuals in charge of guiding public opinion, to a greater extent than do American journalists, who are more likely to see it as their duty to act as objective and neutral professionals. I thought that French newsrooms would provide an important counterpoint to how market and click-based pressures affected U.S. media.

Do journalists in New York and Paris react differently to clicks and audience metrics?

AC: Yes! Based on my interviews and observations with journalists, I identified what I call a process of “divergence within convergence.” On the convergence side, I found that journalists on both sides of the Atlantic navigate a daily tension between what I label editorial and click-based definitions of journalistic quality. Whereas editorial criteria focus on the newsworthiness, investigation, and writing style of news articles, journalists drawing on click-based arguments tend to pay more attention to more quantitative criteria of value, such as the online popularity of articles, how “viral” they were on social media, and whether they created a “buzz” among online readers. The tension between these two logics was visible in newsrooms in the United States and France. Should journalists write an article they found important, but which they knew would probably not be popular, or a light piece that readers would click on but might not make a difference? In both countries, journalists often struggled to reconcile these questions.

That said—and this is the divergence side—journalists in New York and Paris put in place strikingly different strategies to manage this tension between editorial and click-based imperatives. In New York, journalists had a more formal division of labor in order to protect their editorial autonomy from the pressure of having to maximize clicks. In contrast, and somewhat paradoxically given the critical and anti-market tradition in parts of the French media, journalists in Paris were more likely to fixate on clicks as a measure of their relevance and value. Metrics at Work relates these differences to the trajectories of the journalistic field in the United States and France. In the different chapters, I analyze the implications of these distinct arrangements on the compensation systems, individual careers, and kind of online news published in the two countries.

What about clickbait? Do you find that audience metrics lead to a decrease in news quality?

AC: It all depends on what you mean by “clickbait.” In order to satisfy the click-based pressure to achieve online popularity, news websites often imitate each other’s popular articles. As a result, editorial formats meant to maximize pageviews—for instance slideshows and listicles ( “10 most beautiful houses in the world!”), quizzes (“Which Harry Potter character are you?”), and breathless headlines (“You won’t believe what happened next!”) are multiplying online. So yes, click-driven editorial formats are now part and parcel of digital news production.

At the same time, journalists are always trying to retain their sense of professional dignity in the face of these new economic and click-based pressures. They engage in a variety of tactics to maintain editorial quality given these constraints. For instance, they “subsidize” long-form investigative articles, which may not attract the readers’ interest but are important editorially, by writing several short pieces that they know will be popular. Or they try to find amusing angles to convey arguments or cover topics that they find important.

In addition, it is important to note that clicks are not an entirely negative development. In many ways, the centrality of audience metrics allows online readers to “vote with their feet,” so historically less visible audience segments can make their preferences visible. Take the case of racial and gender questions, which had been largely disregarded or only covered from certain angles in mainstream print newspapers: as news websites realized that there was an audience for these topics, some dedicated more resources to these questions.

Overall, I think that the derogatory term of “clickbait” lumps together many different transformations, some of which are positive, some of which are more problematic. What I show in the book is that web journalists are handling the new economic constraints of digital production in creative and innovative ways, resulting in a more interesting ecosystem than doomsayers would acknowledge.

Angèle Christin, author of Metrics at Work, is assistant professor of communication and, by courtesy, of sociology at Stanford University. Website www.angelechristin.com Twitter @AngeleChristin