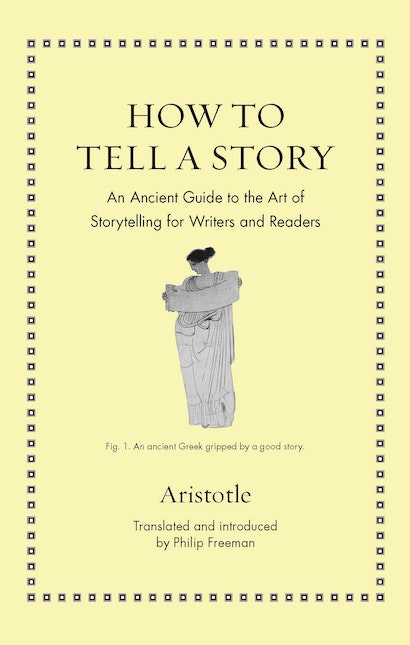 How to Tell a Story
Available in 2 editions
Buy This

Back when I was a first-year college student and thought I knew everything already, I remember my English composition professor telling us that Aristotle’s Poetics contained everything we needed to know about becoming great writers. This seemed ridiculous to me since I knew Aristotle was an ancient Greek philosopher who lived over two thousand years ago and people are obviously much smarter now. But as I went on to earn degrees in Greek and Latin and eventually become a Classics professor, I learned that Aristotle was much smarter than me in pretty much everything, including how to tell a story.

Aristotle is widely known as a brilliant philosopher and inventor of practically every subject we study at universities today, but fewer people know that he wrote the first book on literary criticism, known as the Poetics. The title might lead you to believe it’s only about poetry, but since practically everything in ancient Greece was written in verse from sweeping epics like the Iliad and Odyssey to obscene comedies, it’s actually about literature in general. And even though the manuscript history of the Poetics has left the text somewhat garbled and abbreviated (the entire second half on comedy is missing), it is a gem of a handbook for modern writers wanting to publish a bestselling novel or Hollywood screenplay. You have to read it for yourself to discover the many lessons he has to teach, but consider just a few of the things Aristotle has to say.

One principle he begins with is that all varieties of art, including storytelling, are a kind of imitation or reflection of the world around us. This makes sense because if you want to reach an audience as a writer you had better tell a story they can relate to, not some abstract construct. This has serious implications for Aristotle since it means every good story has to follow logical rules. He condemns random plot changes, absurd twists, and deus ex machina endings. You can write great fantasy tales, but you still have to ground them in the basic constraints of the world we all live in.

Speaking of endings, Aristotle also says you better have one, along with a clear beginning and middle. This may sound obvious, but too many books and movies start strong and fizzle out by the end because the writer hasn’t planned a clear and satisfying culmination to the story. What makes Agatha Christie mysteries so enjoyable is that even with all of their twists and surprises, they fit together in the end like pieces of a puzzle. Aristotle says that Oedipus Rex by Sophocles (his favorite tragedy) is likewise a model of the requirement that all good stories must have a clear beginning, logical building of action in the middle, and a surprising but reasonable ending, even if (spoiler alert) the main character doesn’t kill his father and have sex with his own mother.

If you’re a budding screenwriter, film director, or television producer, Aristotle also says you also want to make certain that plot is at the heart of your script. This means that spectacle and special effects are always secondary to storyline. You can still have car chases and plenty of scary-looking aliens invading Los Angeles, but you had better make sure everything in your story serves the plot. This also includes characters—which brings us to the most controversial rule of Aristotle which says that the characters in your story are seconday to the plot. Now plenty of very successful writers will disagree with Aristotle on this point since they believe characterization is primary and the very thing any good story is built around. But consider your favorite stories for a moment and see if you don’t think Aristotle is right. Imagine a story with fantastic characters and no decent plot (you don’t have to imagine too hard since there are plenty of movies like this). It’s fun to watch great actors play such characters for a while, but it grows boring since nothing really happens.

Aristotle says finally that the best characters in a tragic story are basically good people (like you and me) who suffer a terrible downfall because of some relatable weakness. If you have a story about a bad person who triumphs in the end, you’re going to have a very angry audience leaving the movie theater. If your story is about a good person who triumphs in the end, you’ve basically created a Disney cartoon, which is all very nice but will not pull at your heartstrings and give you the emotional workout of a gripping drama. For Aristotle, the very best stories make you feel pity for a likeable but flawed character and a fearful realization that the same thing could have happened to you.

Aristotle has so many more great lessons to teach writers that are just as applicable today as they were two thousand years ago. Whether you’re polishing off your novel or writing the next great screenplay for Netflix, this ancient Greek philosopher has something to say to you.

Philip Freeman is a professor of Classics at Pepperdine University in Malibu, California and author of How to Tell a Story, a modern translation of Aristotle’s Poetics.