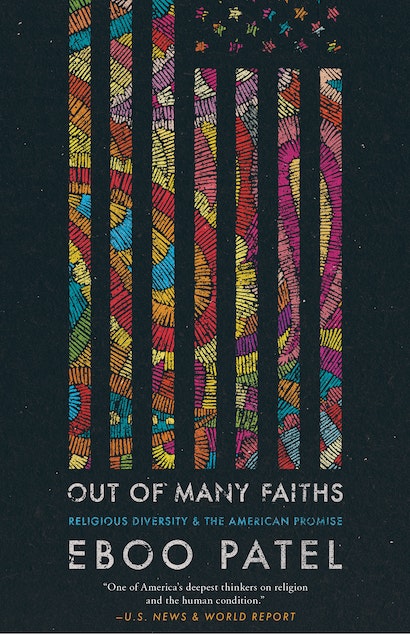 Out of Many Faiths
Available in 2 editions
Buy This

America is the most religiously diverse nation on the planet. In today’s volatile climate of religious conflict and distrust, how do we affirm that the American promise is deeply intertwined with how each of us engages with people of different beliefs? Eboo Patel, former faith adviser to Barack Obama, provides answers to this timely question. In this thought-provoking book, Patel draws on his personal experience as a Muslim in America to examine the importance of religious diversity in the nation’s cultural, political, and economic life. He explores how religious language has given the United States some of its most enduring symbols and inspired its most vital civic institutions—and demonstrates how the genius of the American experiment lies in its empowerment of all people.

1. “Expressive Symbolism has the power to divide or unite, and the future of our pluralism depends in large part on what we publicly embrace.” (Intro Page xviii). Earl Lewis and Nancy Cantor mention some of these symbols in their Introduction. What are some public symbols you feel divide society in this moment in time? What are some public symbols you feel that reinforce unity? If the future of pluralism depends on what symbols we publicly embrace, who decides what the ‘right’ symbols are? Do symbols associated with religion carry special peril or promise?

2. Patel writes: “If American democracy depends on the vibrancy of our civic life, and if our civic life depends at least in part on the contributions of religious communities, then it would seem self-evident that facilitating such participation is a compelling interest for American democracy.” (Page 15) For this to happen, Patel asserts that we have to make the following commitments:

Discuss actions that you, your campus, or your community could take.

3. Patel poses the question, “If religious language and symbols play a significant role in American civil religion, and if America is getting more religiously diverse, then how will other religious vocabularies and experiences be incorporated into our evolving civil religion?” (Page 25). Discuss and cite example, whether from Patel’s text or your own experience.

5. Patel writes, “Lest anyone think that my desire for religious communities to harmonize their identities with America’s ideals and traditions is a call for conformity, let me remind you that the American tradition celebrates dissenters of all stripes.” (Page 27). He mentions several dissenters who have played important roles in American civil religion. Consider the lives of dissenters like Roger Williams, Anne Hutchinson, Jane Addams, Woody Guthrie, and Dorothy Day. How did they become a part of American civil religion? Are there others like them?

6. Patel asks: “If the dynamics of American religious diversity changed so vastly in the past, through the launch of a new civil religion narrative in the form of the “Judeo-Christian” ideal and efforts to align the national reality with the new ideal, can a similar process occur again? And what might that look like now, when Muslims are the group around which controversy swirls?” (Page 73). Discuss.

7. On pages 80-84, Patel discusses Aziz Ansari, a highly successful actor, writer, stand-up comic, and director born to Indian Muslim parents. In the “Religion” episode of his Netflix series Master of None, the comic visualizes parallels between the observant Muslim that his parents believe him to be and the not-so-observant Muslim life he actually lives. Patel says that “on the one hand, this is terrific. Not only does it add to the voices speaking out against Islamophobia, it increases the number of non-terrorist Muslims that Americans can identify.” He also goes on to point out a parallel: “What do observant Muslims do when one of the most prominent defenders of Muslims in the public square is producing shows that encourage Muslims to skip Eid to go eat pork at a barbeque festival and suggesting that the fellowship of a wine tasting is comparable to the fellowship at jummah prayers?” What are the tensions between Ansari using his far-reaching, public platform to combat the ‘Muslim as a “threat”’ stereotype? Does he take the ritual and traditions of religion seriously?

8. The book contains lengthy responses from three prominent scholars of religion in American public life. Consider what your own response might say. What points from Patel’s book might you want to highlight? What might you disagree with?

9. After reading this book, have any of your own opinions changed on the ways in which religion and the United States are so intricately connected – in good ways and in less positive ways?

10. In the book Patel notes that “religious diversity may be the one the Founders came closest to getting right” (page 4). Do you agree? Why or why not?

Eboo Patel is founder and president of Interfaith Youth Core, a nonprofit organization that promotes interfaith leadership on college campuses. He is the author of Interfaith Leadership, Sacred Ground, and Acts of Faith. Twitter @EbooPatel