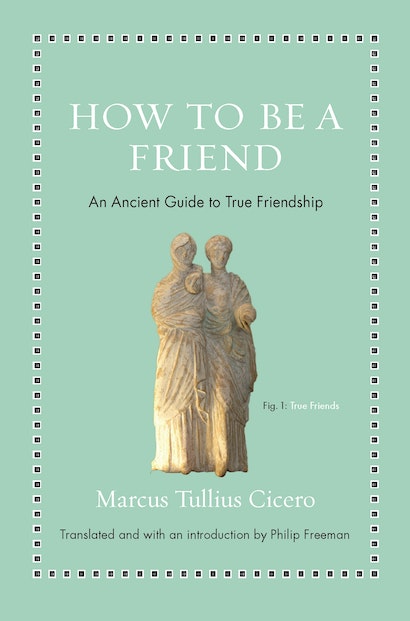 How to Be a Friend
Available in 2 editions
Buy This

The best friend of the Roman politician Marcus Cicero was Titus Pomponius, also known as Atticus since he spent many years living in Athens to escape the political chaos and partisan bickering of republican Rome. Cicero and Atticus had been friends since boyhood and their surviving letters provide an inside look into one of the closest friendships in the ancient world, even though they were often far apart.

Cicero would soon have his head chopped off by Marc Antony for opposing an ever-growing tyranny, but the year before his death, when Julius Caesar had become dictator of Rome, Cicero was in exile on a quiet farm outside of the city. There, separated not only from Atticus but from all his other companions, he began writing books to fill his days. In a remarkably short time he produced some of the most brilliant and influential works of Latin literature, including a small essay called De Amicitia—“On Friendship”—and dedicated it to Atticus.

In this timeless little work, Cicero wrote about the importance of finding and keeping friends in an uncertain world. Although the book is two thousand years old, it still rings true today.

Even before the coronavirus spread around the world and forced us to keep our distance from each other, so many people were suffering from loneliness. For this problem, Cicero offers a solution as simple and obvious as it is difficult to achieve: Find a true friend. But how can we do this?

Cicero says you need to understand a few things about friendship. First, there are different types of friends, and confusing one with the other will only leave you frustrated. There are what he calls friends of utility—the people who (in normal times at least) you interact with every day as they deliver your mail or sell you a pound of ground beef at the grocery store. These relationships are friendly enough in their own way, but they are essentially business transactions. Telling a utility friend the deepest secrets of your soul is going to make both of you uncomfortable. Then there are friends of pleasure, such as those in your Saturday afternoon basketball league. These are closer than utility friends to be sure and fun to have a few beers with after the game, but still not people you can necessarily count on to be there when the really hard times come. Finally there are true friends we bind ourselves to at a much deeper level, those rare souls in life who would do anything for us as we would for them. They are what Cicero calls “another self.”

The search for these true friends is difficult and can take time, maybe years, but the effort is worth it since they give a meaning to your life you can’t find anywhere else, especially in times of isolation. And realize that you probably won’t find more than a handful of these true friends during your lifetime, if you are lucky. But when you do, these people will make you a much better person since left on our own we will usually fall into a pit of solipsism and self-pity. People without friends are prone to bitterness, narcissism, and anger at a world they feel no real connection to. Real friends force us out of ourselves and even tell us unpleasant things we need to hear. If we’re wise, we listen.

Cicero admonishes us that even though we have something valuable to gain from true friendship—advice, companionship, support in difficult times—it isn’t transactional. A real friend never keeps score since the reward of friendship is friendship itself.

“Suppose a god carried you far away,” Cicero says, “to a place where you were granted an abundance of every material good that nature could wish for—but you were denied the possibility of ever seeing or talking with another human being. Wouldn’t you have to be as hard as iron to endure that sort of life? Wouldn’t you, utterly alone, lose every capacity for joy and pleasure?”

It was Cicero’s letters to Atticus and his other friends that kept him sane during the many months he was alone and cut off from the world. Even though he couldn’t see them and talk to them as we can with video chats and telephone calls, it was these human connections that made all the difference to him, as they still can for us.

Philip Freeman, a classics professor at Pepperdine University, is the editor of How to Be a Friend: An Ancient Guide to True Friendship.