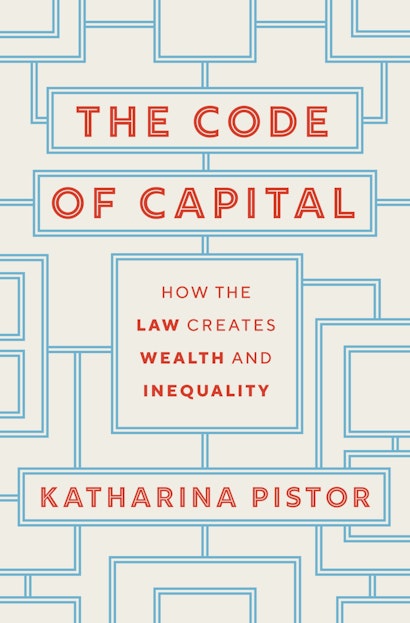 The Code of Capital
Available in 3 editions
Buy This

With the tax season in full swing, it is worth reflecting on the purposes that taxes serve in society. One is state revenue; ensuring the acceptance of state issued currency in which taxes must be paid is another; and addressing inequality the third. My focus here is on the latter.

Using taxes to redistribute wealth has many followers in academic and policy circles. Thomas Piketty, Emanuel Saez and Gabriel Zucman have been the most outspoken academics to call for wealth taxes, global corporate income, and more progressive domestic income taxes, among others.

Their advocacy is finding increasingly receptive ears even in the United States, the country that has spearheaded the race to the bottom in global tax competition at least since the Reagan administration. Just a few years ago, the US further lowered corporate income taxes to 21 percent and blocked efforts by the Organization for Economic Cooperation and Development (OECD) for a new international tax framework. Meanwhile, change seems to be in the air. The new Biden administration is proposing a partial reversal of the 2017 tax reforms (increasing it to 28 percent) and is pushing for a global minimum tax of 21 percent.

If implemented, these new taxes might be a game changer in the amount of taxes that corporations will pay to states around the globe. It may even slow the further widening of the wealth gap between the super-rich and the rest. This, however, is not quite the same as reducing the levels of inequality.

Taxes help reduce income and wealth gaps. Before taxation and tax dodging, however, comes the production of income and wealth. Most commentators count resource endowment, education, skills, opportunities, or just animal spirit as critical for wealth creation. Missing in this accounting, however, is the most important resource: the law. Importantly, it is a social, not a private resource.

In The Code of Capital: How the Law Creates Wealth and Inequality, I make the argument that law is the cloth from which capital is cut. Market competition is not just about superior skills or better quality products. Rather it is about stronger versus weaker rights or priority, greater sophistication in protecting gains made in the past behind legal shields, thereby making them durable, or creating options to convert them into safer assets on demand, and last but not least ensuring that these rights will be enforced against anybody who challenges them, ensuring them universality.

A handful of legal modules drawn from private law, simple objects, promises and ideas can be converted into wealth generating, or capital assets. They include property rights, collateral law, trust, corporate, bankruptcy and contract law. By conferring priority, durability or convertibility, and universal enforceability on simple assets, they place them on legal steroids, giving their holders a comparative advantage over others.

Most private wealth today is held in financial assets—promises to future pay on legal steroids. Few financial assets would find any takers absent the credible threat of enforcement should the promisor renege on his promise. This was as true for the bills of exchange, which helped knit together a payment system that spanned Europe’s major trading routes in the seventeenth century, as it has been more recently for the securitized assets and their derivatives that helped drive financial markets to unprecedented heights prior to the 2008 crisis.

A bill of exchange is an “I owe You” with the add-on that every person who endorses it will have to stand in for the amount stated on it. This worked, because legal systems across Europe ensured that bills were enforceable. A securitized asset is simple a way of bundling the promises of many debtors (such as homeowners how borrow to finance their house), transferring them together with any collateral (a mortgage) behind a legal shield, thereby legally separating these assets from others and their creditors, and then slicing and dicing the claims to meet their risk tastes of different investors. Further legal steroids can and have indeed been added, such safe harbors from bankruptcy law or special tax treatment.

The legal structure of financial assets is often hidden behind an alphabet soup of financial jargon (ABS, MBS, CDS, CDO, CLO, Repo…). Yet, dissecting them renders the core modules of the code of capital. Equally disguised is the fact that none of these assets had any chance of accruing wealth absent a legal system that upholds a credible threat of enforceability.

Looking at inequality this way, private wealth is created through legal coding. This then raises the question, why societies are willing give away the goose that lays the golden eggs only to fight over the eggs once they have been laid. Insights from behavioral studies indicate that it is much harder to let go of what individuals believe is theirs than to live with less to begin with. Relying primarily on taxation to fight inequality thus faces an uphill struggle, one that societies have won only sometimes and only for limited periods.

Katharina Pistor is the Edwin B. Parker Professor of Comparative Law and director of the Center on Global Legal Transformation at Columbia Law School. Her books include Law and Capitalism: What Corporate Crises Reveal about Legal Systems and Economic Development around the World. Twitter @KatharinaPistor