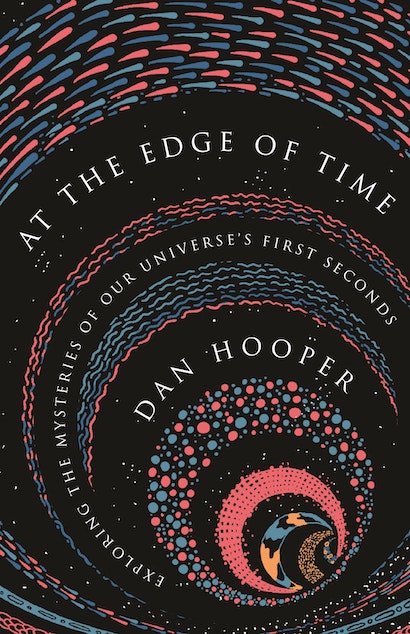 At the Edge of Time
Available in 3 editions
Buy This

Over the past century, cosmologists have pieced together a remarkably detailed picture of our universe and its history, spanning from the first seconds that followed the Big Bang up to the present. But when it comes to what occurred during the first seconds and fractions of a second, we know far less. In his book, At the Edge of Time, Hooper argues that many of the puzzles faced by modern cosmologists give us reason to think that this earliest period of time may have played out very differently than we had long imagined.

What do we know about the origin and history of our universe? Is there a series of events that took place at specific times that more-or-less all scientists can agree upon?

DH: For most of a century, we’ve known that our universe is expanding and that it grew out of a compact and hot state that we call the Big Bang. Using the laws of physics as we currently understand them, we can calculate how this process should have played out, and when we compare the results of these calculations with what we see when we observe our universe, we find stunning agreement. As a result, there is a nearly complete consensus among experts today that our universe expanded and evolved very much like the Big Bang theory had long predicted – at least over most of its history.

Why did you include that caveat at the end of that last statement? Are there parts of our universe’s history that might not have played out in the same way that theory predicts?

DH: Absolutely. As a result of studying the light that was released during the formation of the first atoms, we know a lot about what our universe was like when it was only a few hundred thousand years old. And by measuring the abundances of various light nuclear elements in our universe – stuff like hydrogen, deuterium and helium – we’ve learned a fair amount about cosmic history as early as a few seconds after the Big Bang. But going back even further in time – into the first seconds and fractions of a second – we really don’t have any direct observations to rely on. I like to say that this primordial era is buried beneath impenetrable layers of energy, distance and time – at least for now.

So what are scientists doing when they talk about the first second after the Big Bang? Are they just guessing?

DH: Sometimes, sure. But even if we can’t directly observe the first second of our universe’s history, we can use particle accelerators to study how matter and energy behave under these extreme conditions, and use that information to infer how these earliest moments likely unfolded.

These days, the world’s leading particle accelerator is the Large Hadron Collider. This machine propels protons up to speeds of 99.999999% of the speed of light and then collides them head-on in order to concentrate as much energy into one place as possible. The collisions studied at this machine are similar to those that repeatedly took place in the very early universe, roughly a trillionth of a second after the Big Bang. By studying these high-energy collisions, we can learn about the laws of physics that our universe obeyed in its first moments.

What are some of the open questions in cosmology today?

DH: In my book, I focus on four big puzzles. The first – and probably most famous – is the question of dark matter. We’ve measured how much matter there is in our universe and it turns out to be much more than exists in the form of atoms. We don’t know what the dark matter is, but it is not made up of atoms or of any other known substances, and it doesn’t appreciably radiate, reflect, or absorb light.

Over the past few decades, physicists have engaged in an ambitious experimental program in an effort to detect and study individual particles of dark matter. If you asked me a decade ago, I would have told you that these experiment would probably have detected dark matter by now, but they haven’t. The experiments have performed just as designed, but they still haven’t seen anything. This has forced us to reconsider what the dark matter is likely to be, and how it may have been created in the early universe.

Another open question has to do with “ordinary” matter and how it was created in the Big Bang. Although it’s easy for us to understand how particles like protons, neutrons and electrons could have been created in the early universe, everything we know about the laws of physics tells us that this matter should have been created alongside an equal amount of more exotic stuff, known as antimatter. The question, then, is why does our universe contains so much matter and so little antimatter? Making things even worse, if matter and antimatter had been created in equal amounts in the Big Bang, then almost all of it should have been destroyed long ago, leaving our universe essentially devoid of atoms. The simple fact that atoms exist means that more matter than antimatter was somehow created in the first fraction of a second of our universe’s history. We have guesses for how this might have happened, but no real evidence in favor of one explanation over any other.

OK, so that’s two puzzles, but you said your book discusses four. What are the other two?

Further thickening this plot, it turns out that the expansion rate of our universe has begun to accelerate over the past few billion years. To explain this fact, we’ve been forced to conclude that our universe contains vast amounts of what is known as dark energy, filling all of space and driving it apart. But our best efforts to understand this phenomenon have come up almost entirely empty handed. We simply do not understand what dark energy is, or why it exists in our universe.

At first glance, it seems that these four puzzles are more-or-less unrelated. Is that the case?

DH: There is no way to know for sure, but I think it is suggestive that each of these puzzles seems to be connected to the first moments after the Big Bang. Whatever the dark matter consists of, it was almost certainly formed in the first fraction of a second after the Big Bang. Similarly, the simple fact that atoms exist in our world tells us that the earliest moments of our universe’s history must have included events and interactions that we still know nothing about. Cosmic inflation also took place during these earliest of times, and could be connected to the existence of dark energy, raising many questions of its own.  In these and other ways, our universe’s greatest mysteries are firmly tied to its first moments.

Dan Hooper is a Senior Scientist at the Fermi National Accelerator Laboratory and a Professor of Astronomy and Astrophysics at the University of Chicago. He is the author of At the Edge of Time: Exploring our Universe’s First Seconds.