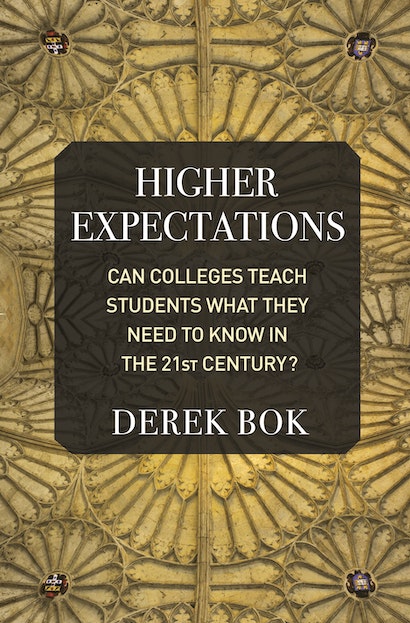 The presidential election of 2016 prompted many academic leaders and faculty members to ponder the implications for their own institution. Much of the conversation has dwelt on what the current administration is doing or seems likely to do about research funding, the enrollment of foreign students, affirmative action, and financial aid. Yet mounting concern over the deep divisions of opinion in the body politic, hyperpartisanship in all three branches of government, and the pervasive distrust of public officials has also led some educators to wonder whether more should be done to prepare young people to be responsible citizens in a democratic society.

The 2016 election gave ample reason to devote fresh thought to this subject. After many months of primary campaigns, multiple televised debates, and millions of ballots cast, the nominating process produced the two candidates with the highest disapproval ratings of all the contenders seeking the nomination of their party. The media coverage of the race for the White House was marked far more by a persistent emphasis on scandal rather than substance. The campaigns themselves were noteworthy not only for the unusual amounts of exaggeration and misrepresentation but for blatantly false stories planted in the social media by sources here and abroad.

In the end, the election produced another modest turnout despite all the money spent on elaborate “ground games” to get supporters to the polls and the high stakes resulting from the wide differences in the policies of the two candidates. The outcome was the election of a president possessing the least governmental experience, the lowest public approval ratings, and the skimpiest knowledge of public affairs of any newly elected chief executive in living memory. The whole experience, coupled with the rise of authoritarian governments in several other countries, sounded a wake-up call that Americans must not take their democracy for granted but should regard our form of government as a system perpetually in need of an active, informed, and vigilant citizenry.

The Decline of Civic Engagement

There were plenty of reasons for concern long before 2016 about the political apathy and limited knowledge of government among American citizens and the reluctance of so many to participate in elections and civic affairs. By the year 2000, voting rates in presidential elections by eligible voters, including young college graduates, had already declined by at least ten percentage points since the early 1970s, leaving the United States with one of the lowest levels of electoral participation among the more prosperous nations of the world. Researchers reported that young Americans had remarkably little knowledge about our system of government or about current political issues. [1] Fewer than one-quarter of high school students were “proficient” in civics according to tests administered in 2010, while the percentage scoring “below basic” climbed to 36 percent. [2] Interest in politics and newspaper readership among young people had diminished substantially over the preceding decades. Responding to these trends, an American Political Science Association task force declared more than a decade before 2016 that it was “axiomatic that current levels of political knowledge, political engagement, and political enthusiasm are so low as to threaten the vitality of democratic politics of the United States.” [3]

The election of Barack Obama in 2008 kindled hopes that political engagement among young Americans might be rising again. But the turnout in that year proved to be only a small, momentary shift in direction. More recent writings on college-age students suggest an even less encouraging picture. According to one such study based on extensive interviews with young people: “The extent of public disengagement among the vast majority of emerging adults (18–23 years of age) is astonishing . . . almost all emerging adults are either apathetically uninformed, distrustful, disempowered, or at most only marginally interested in politics and public life.” [4] The percentages of twelfth-graders who trust public officials, believe that government is run for the people, or are confident that political leaders are honest have sunk to the lowest levels since statistics for these opinions were first compiled in 1976. [5]

Trends such as these have disturbing consequences for the health of our democracy. Political apathy is not evenly distributed throughout the population. Ultraconservative and ultraliberal voters tend to be more involved in politics and to vote at higher rates than moderates, thus intensifying the divisions in Congress that have repeatedly blocked bipartisan collaboration. Well-to-do Americans go to the polls much more regularly than their poorer fellow citizens (and provide the bulk of the campaign contributions), causing lawmakers to be disproportionately responsive to the concerns of affluent constituents and well-organized interest groups. The ease with which uninformed voters can be manipulated tempts politicians and other purveyors of political information to resort to misleading or even blatantly false assertions.

Civic education cannot cure these ills by itself. But it might help to bring about higher levels of voting, a more knowledgeable electorate, and a more accountable government, while encouraging more citizens to become active in politics and public affairs at the national, state, and local levels. Over the years, this possibility has inspired a series of authors and commissions to publish books and reports urging educators to mount a vigorous effort to prepare their students to be active and informed citizens. And yet, one looks in vain on most college campuses for signs of a well-considered program of civic education. Rarely does a college catalog contain a mandatory set of courses to inform students about their government and the importance of an engaged citizenry. Faculties seldom even engage in a serious discussion of the topic. Why colleges devote so little attention to a subject that seems so urgent and so necessary is the threshold question in a chapter on the role of civic education.

What Do We Mean by Civic Education?

Commentators who write about civic education usually have several objectives in mind. First, students should be made aware of the important role of citizen participation under our system of government. Second, they should acquire the basic information that helps them to understand how the government works and to grasp the most important and enduring issues of public policy. Third, civic education should give students an understanding of the rights and protections provided for individuals and the fundamental principles of justice and fairness that will help them evaluate many government policies and actions. Finally, civic education should motivate students to take an interest in politics and civic affairs and teach them the basic skills and qualities of mind required for responsible civic participation, such as analytic ability, proficiency in written and oral communication, respect for the rights of others, and the capacity to work with fellow citizens effectively and collaboratively toward common goals.

Can Public Schools Do the Job?

Schools rather than colleges have long been the primary source of civic education in America. As that early champion of public education, Horace Mann, pointed out more than 150 years ago: “One of the highest and most valuable objects to which the influence of a school can be made conducive consists of training our children for self-government.” [6] Since public schools enroll the vast majority of America’s youth, they would seem to be the most obvious locus for preparing young people for their future role as citizens.

No serious observer, however, has argued that public schools can take care of providing civic education by themselves. Many studies have pointed to the difficulties that beset our K–12 education, especially in schools in lower-income neighborhoods. A series of problems hamper existing efforts, including ineffective teaching, inadequate funding, and conflicting pressures from school boards, parents, politicians, and textbook publishers. [7] Moreover, most states place surprisingly little emphasis on civic education in schools. Ten do not require any high school courses in civics, thirty-one merely require a single course lasting one semester, and only sixteen require periodic assessments of civic knowledge. A mere 24 percent of twelfth-graders performed at or above the proficiency level in civics according to the national assessment conducted by the US Department of Education in 2010. [8]

Colleges can never fully compensate for the weaknesses of public schools. Not everyone goes to college, and only two-thirds of those who do ever graduate. Still, at least 85 percent of today’s high school graduates enroll in a college at some point in their lives. Moreover, college graduates make up a disproportionate share of American voters and a very high percentage of political officeholders and persons active in civic organizations. Professors are also much freer from outside partisan pressures than public school teachers in choosing the content of their courses and the materials they assign their students. There are good reasons, then, for calling on colleges to play a substantial role in the preparation of active, informed citizens.

This essay is an excerpt from Higher Expectations: Can Colleges Teach Students What They Need to Know in the 21st Century? by Derek Bok.

Derek Bok is the 300th Anniversary University Research Professor at Harvard University. He served as the twenty-fifth president of Harvard from 1971 to 1991, and as interim president from 2006 to 2007. His many books include The Struggle to Reform Our Colleges, Higher Education in America, Our Underachieving Colleges, and The Shape of the River (all Princeton).

1. Michael X. Delli-Carpini and Scott Keeter, What Americans Know About Politics and Why It Matters (1996).