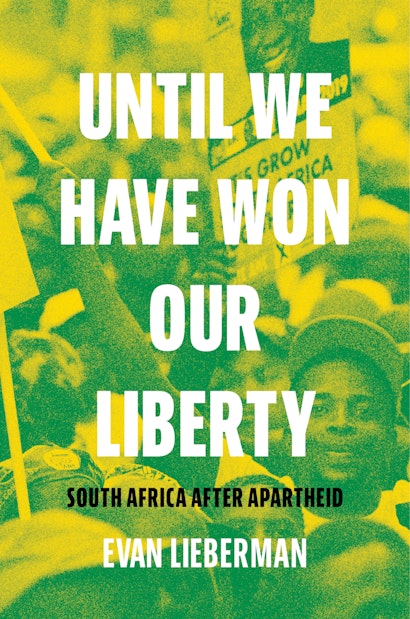 At a time when many democracies are under strain around the world, Until We Have Won Our Liberty shines new light on the signal achievements of one of the contemporary era’s most closely watched transitions away from minority rule. South Africa’s democratic development has been messy, fiercely contested, and sometimes violent. But as Evan Lieberman argues, it has also offered a voice to the voiceless, unprecedented levels of government accountability, and tangible improvements in quality of life.

What first attracted your interest to South Africa as a subject of study?

EL: As a young person growing up in the 1980s, I was deeply troubled to learn about the fundamental injustice of the apartheid system. It was almost unimaginable that it could persist. And while I was a college student in the early 1990s, Mandela was released, and the idea that such an evil system might be replaced by something fundamentally better really captured my imagination and interest. I am still motivated by those sentiments.

How did South Africa avoid civil war and widespread interracial violence after Apartheid?

EL: Just as it’s hard to know exactly why people engage in violence, it’s also hard to know for sure why they don’t. Moreover, the four years after Mandela’s release were extremely violent. And yet, it certainly seems plausible that democratic practice and a government that could potentially serve everyone, took fuel away from most fiery impulses to harm others for political gain. It is a case of ballots over bullets.

How important was Nelson Mandela’s role in creating the new, post-Apartheid South Africa?

EL: Mandela’s forbearance and desire to seek reconciliation over revenge alongside a personal history of heroism and personal suffering earned widespread trust, which proved critical for keeping a fractured society from coming apart. Nonetheless, we also shouldn’t forget the large number of leaders across the political spectrum, and especially born out of the liberation struggle, whose courage and hard work made this transition possible.

What are some of the most prominent ways in which South Africa has changed since you began studying it?

EL: I have been fortunate to travel to South Africa practically every year over the past three decades—with the recent pandemic being a painful exception. During that time, urban spaces have become far more racially integrated; and I’ve seen evidence of substantial upgrading of the quality of many human settlements. On the other hand, profound inequality remains palpable and overall frustration is clearly much greater than in the early days of post apartheid government.

Why did you choose to focus on the 2019 national election, including your tour of polling places in Mogale City?

EL: Certainly the 25th anniversary since the first multiracial election marked a notable milestone worth reflecting upon. Writing this book was an opportunity for me to go on a journey back into South African history up to the present, and I tried to plan my Election Day tour of Mogale City (chapter two) in a manner that would reflect that history.

Why did you choose Mogale City as the focus of your study?

EL: There were a few factors: First, I wanted to focus on a place that reflected some of the growing political competition in the country, and in the prior (2016) local election, the ANC failed to win a majority of votes in Mogale City for the first time since the reconfiguration of local government. Second, I wanted to go to a mid-sized municipality, where I could plausibly meet and gain access to many of the political leaders. Finally, I wanted to go somewhere that I had not already spent much time because I wanted to be open to new perspectives and discoveries—and simply to learn about a new place.

What are some of the biggest misconceptions about South Africa that you have encountered?

What lessons does South Africa’s post-Apartheid experience offer for the United States as it tries to overcome centuries of racial oppression?

EL: Neither South Africa nor the United States have come close to adequately addressing such legacies and there are no simple lessons for doing so. Nonetheless, Americans could and should take note that many South African institutions seem better suited for building a more just society. For one, enshrining certain socio-economic rights as fundamental has helped make the quest to protect human dignity a constant rather than a political variable. Second, I believe that Americans could use a reminder of the values of proportionality and forbearance in political life, as evidenced in the South African record. Finally, I think it’s useful for Americans to recognize more broadly that our problems and challenges have comparative referents and we ignore those at our peril.