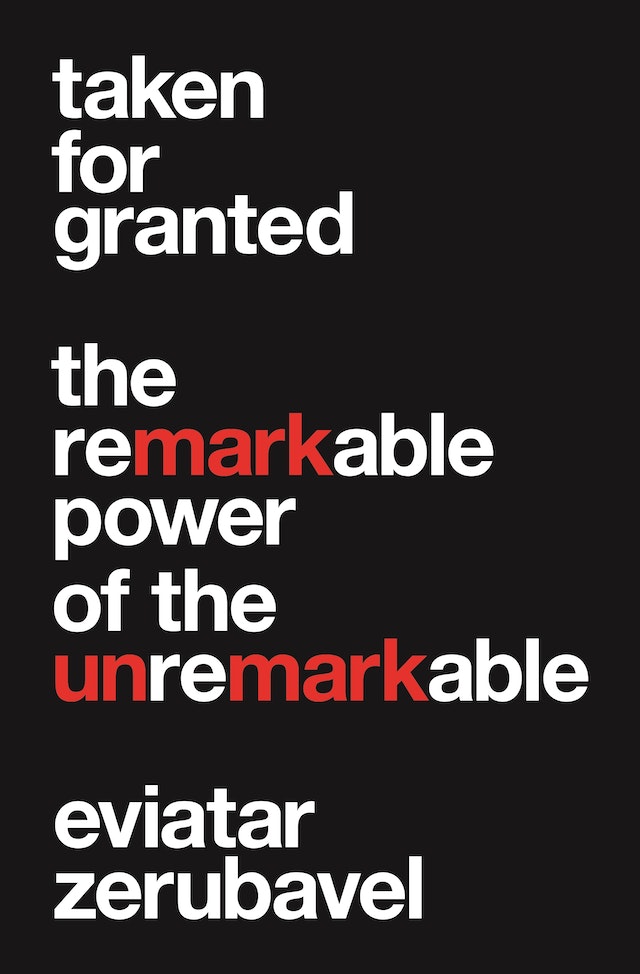 Taken for Granted
Available in 3 editions
Buy This

Why is the term “openly gay” so widely used but “openly straight” is not? What are the unspoken assumptions behind terms like “male nurse,” “working mom,” and “white trash?” Offering a revealing and provocative look at the word choices we make every day without even realizing it, Taken for Granted exposes the subtly encoded ways we talk about race, gender, sexual orientation, religion, social status, and more. A little book about a very big idea, Taken for Granted draws our attention to what we implicitly assume to be normal—and in the process unsettles the very notion of normality.

What is this book about?

EZ: This book examines how we separate the “special” from the “ordinary,” which we tend to assume by default. By drawing explicit attention to what we implicitly take for granted, it thus highlights the presumed normality of our social world. In so doing, it is actually designed to unsettle our very notion of normality.

The two opening chapters of this book are titled “The Marked and the Unmarked” and “Semiotic Asymmetry.” What do you mean by that?

EZ: I am essentially referring to the cultural asymmetry between what we consider special, or marked, and ordinary, or unmarked. It is the unmistakably asymmetrical semiotic arrangement whereby we have a special road sign indicating a curvy road ahead yet none for a straight one, parking spots and toilet booths specifically marked for the disabled yet none for the able-bodied. It is the asymmetrical arrangement whereby, unlike vegetarians, other dinner guests are rarely expected to notify their hosts in advance that they do eat meat, which is conventionally presumed. This is a function of uneven distributions of semiotic “weight” between what we conventionally consider “normal” and “abnormal.” Thus, for example, while African and European ancestors are equivalent in terms of what they contribute to their American descendants’ genetic makeup, they differ considerably in their respective semiotic contributions to their racial identity, which is why we consider Barack Obama a black man whose mother was white rather than a white man whose father was black. By the same token, although bisexuality is a blend of both homo- and heterosexual dispositions, bisexuals nevertheless tend to be lumped with homosexuals rather than heterosexuals. Whether or not we mark something is not just a matter of personal choice. Yet nor is anything inherently marked. As I demonstrate in the book, ordinariness (“normality”) and specialness (“abnormality”) are products of particular semiotic norms, traditions, and conventions we share as members of particular communities.

Does all this also skew the way we view people?

EZ: It certainly does, as suggested by the fact that when a character’s racial identity is not specified in a play or a script, white actors are more likely than non-white ones to be cast in that role. Furthermore, we have distinct cultural stereotypes of Asians, lesbians, and drug addicts, for example, yet rarely ones of law-abiding citizens, the mentally healthy, or the able-bodied. Such glaring asymmetry underscores the relative semiotic ease at which we construct stereotypes of cultural abnormality compared to those of cultural normality.

Does that also affect prejudice?

EZ: Of course it does. After the 1995 bombing in Oklahoma City, for example, no one demanded tighter security measures against Christian Americans! Nor do Americans expect “moderate whites” to publicly condemn mass shooters the way “moderate Muslims” are often expected to publicly condemn Muslim terrorists, even though mass shooters tend to be white. And had Donald Trump lived at the time of President Theodore Roosevelt, I am sure he would not have insisted that he produce his birth certificate, as his Dutch roots would not have clashed with Trump’s presumed notion of “normal” Americanness the way Obama’s African ones evidently did.

Does power play any role in all this?

EZ: Social dominance involves the power to set standards of normality and “other” whatever and whoever deviates from them. Moreover, it involves the privilege of being assumed by default and therefore the ability to protect a group’s assumed normality from being challenged. What allows a certain idea, practice, or identity to maintain its cultural dominance, in short, is the fact that it is conventionally considered “self-evident” and thereby taken for granted. “Normality” thus helps establish as well as maintain social dominance. By marking something, we actually normalize what remains unmarked, thereby implying that it can be assumed by default. Marking femaleness, blackness, homosexuality, and disability, for instance, is thus inseparable from presuming the normality of maleness, whiteness, straightness, and able-bodiedness. Furthermore, social dominance also includes the power to affect what others take for granted by essentially leading them to almost habitually make certain tacit assumptions without even realizing that they are making them.

Much of the evidence on which you draw in this book comes from language. Why?

EZ: Language offers us a window into the way we think. Furthermore, it also affects the way we think. It was the very act of labeling it sexual harassment, after all, that gave this hitherto preconceptualized phenomenon a cultural life! Examining the words we use is particularly useful in helping reveal what we assume by default and therefore take for granted. Indeed, the extent to which we consider something ordinary, or “normal,” is inversely related to the availability of cultural labels to denote it. Its taken-for-grantedness is therefore evidenced in its semiotic superfluity, so clearly manifested in the paucity of words and phrases denoting what we conventionally assume by default. In other words, since what we take for granted is essentially presumed, it need not be explicitly articulated. Since romantic relations are conventionally presumed to be monogamous, for example, the term polyamory is in fact used much more widely than its conventionally taken-for-granted counterpart monoamory. The term biracial is likewise used far more widely than its nominally equivalent counterpart monoracial. Therefore, as we encounter the term male nurse, for example, we need to also be able to “hear” the absence of its lexical counterpart female nurse. By the same token, as we encounter the term LGBT community, we need to also be able to “hear” the absence of the term straight community, which implies that, unlike being gay, to be straight is to have the option of disregarding one’s straightness. And when we hear the term Black History Month, we must likewise “hear” the absence of the term White History Month, a sad testimony to the fact that black American history is still regarded by many as separate from “American” history, and African Americans as tacitly excluded from the cultural category “Americans.” The same can be said of phrases such as “the best female tennis player in the world.” As Serena Williams reminds us, “do people say LeBron is one of the world’s best male athletes?”

What are your thoughts about social change?

EZ: In the book I address fundamental “assumption reversals” that often accompany major cultural changes. The recent change from an essentially passive to a pronouncedly active definition of consent in American sexual ethics (that is, from silence implying consent to silence implying absence of consent) is a perfect case in point. Such reversals are often manifested lexically. Although housekeeping used to be married middle-class American women’s most common occupation, the emergence of the term stay-at-home mom and the waning prominence of its contrasting counterpart working mom (yet rarely working dad …) thus attest to the decline in its presumed normality. That is why we also need to attend to the semiotically subversive use of language. The term cisgender, for instance, is explicitly designed to cast transgender persons and people whose gender identity conforms to their birth-assigned sex as categorical equals. Putting “trans” and “ordinary” identities on an equal semiotic footing, in other words, helps normalize the former by subverting the latter’s presumed normality, which is also true of terms such as straight (with regard to gay) and neurotypical (with regard to autistic). Our conventional view of what is so “normal” as to be assumed by default, in short, need not be taken for granted as self-evident.

Eviatar Zerubavel is Board of Governors and Distinguished Professor of Sociology at Rutgers University. His many books include Social Mindscapes: An Invitation to Cognitive Sociology, The Elephant in the Room: Silence and Denial in Everyday Life, and Ancestors and Relatives: Genealogy, Identity, and Community. He lives in East Brunswick, New Jersey.