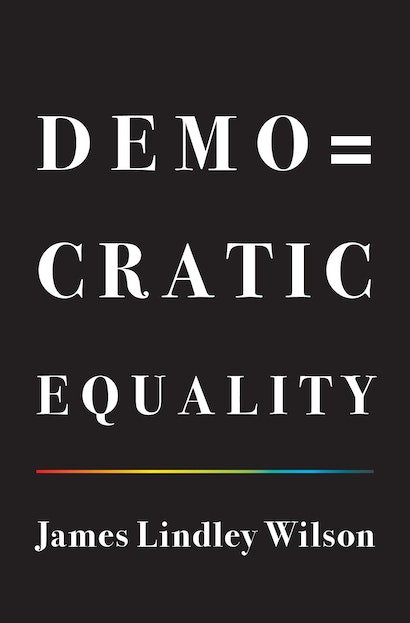 Democracy establishes relationships of political equality, ones in which citizens equally share authority over what they do together and respect one another as equals. But in today’s divided public square, democracy is challenged by political thinkers who disagree about how democratic institutions should be organized, and by antidemocratic politicians who exploit uncertainties about what democracy requires and why it matters. Democratic Equality mounts a bold and persuasive defense of democracy as a way of making collective decisions, showing how equality of authority is essential to relating equally as citizens.

JW: Among some groups, that democracy is good or best may be conventional wisdom. But democracy is not universally beloved. There are billions of people who live under non-democratic regimes, and by no means all of those people wish they lived in a democracy. Even in democratic countries, there are people who would prefer more authoritarian regimes (as long as those regimes pursued good policies), and people who are uncertain about the value of democracy. Anti-democratic movements sometimes gain real political power. Thus we see “democratic backsliding” or “erosion” in Venezuela, Poland, Hungary, and perhaps even the U.S. Arguing on behalf of democracy does involve taking a stand on a controversial question. Democracy needs defending.

Is the point to convince skeptics of democracy that they should support it?

JW: In part, yes—or at least to get them to think twice about their skepticism! But the book is also aimed at readers who do support democracy. Many of us are uncertain about what democracy really is, or what it requires. Which institutions are truly democratic? Which appear to be democracy but really amount to unequal rule? What are the rights and responsibilities of democratic citizens? The idea of this book is that we cannot answer those questions well without understanding why we should support democracy in the first place.

You argue that we should support democracy because it involves an important kind of equality. What is that equality, and why should we value it?

JW: It’s a familiar idea. Democracy involves political equality—each citizen is equally an authority over matters of common life. Citizens are equally in charge. The challenge is explaining what is so good about this equality. There’s some evidence that roughly democratic governments treat their citizens better, by various metrics. That’s important! But is there anything special about political equality itself? Special enough that we should preserve it even if an authoritarian government might make us richer or happier? I think so. Social equality among people is very valuable. It’s a good, respectful way of relating to one another, and it avoids the very many bad features of inequality—oppression, domination, arrogance, servility, and the like. One main theme of this book is that social equality requires political equality. People are not social equals if some are unequally in charge over others. Democracy is important because it is the only way to have a society of equals.

Why is democracy such an important part of social equality?

JW: There are familiar bad features of political inequality: the enforced vulnerability of the disenfranchised, the stigma that comes with exclusion from decision-making, and so on. Equality is incompatible with these features of social life. But we can also reflect on more ordinary, personal relationships. I argue that good friendship requires more than the friends treating one another’s interests as equally important. It also requires equally sharing authority over the terms of the relationship, such as how the friends spend time together. If your supposed friend treats you kindly but never cares what you think the two of you ought to do together, he or she is not a good friend. You are not being treated as an equal. I think this point about equality generalizes to the political level. So democracy limits bad inequalities and manifests a good kind of equal relation.

You suggested this defense of democracy might help address controversies about how to organize democratic institutions. Can you give an example?

JW: Consider the use of wealth to fund political campaigns. Critics of campaign finance regulations sometimes argue that there is nothing undemocratic about rich people or corporations funding campaigns. They argue that funding political communication just provides others with information, which they can take or leave, while everyone gets an equal vote. I argue that this view is mistaken. Certain patterns of communication reflect failures to treat all citizens as equal authorities when it comes to democratic deliberation. These patterns include structural forms of racism and sexism—such as widespread habits of (often unintentionally) treating white males as more serious or smart or competent. They also include systems of funding that focus attention on the views of the rich at the expense of attention on the views of the poor. So a laissez faire system of funding communication can be truly undemocratic. This is true even if the voting system is otherwise fair. We cannot understand that, though, without a good grasp on what democratic equality is, in voting and in deliberation.

Did you ever come to change your mind about some democratic institutions as you developed your view of political equality?

JW: Yes. I became more skeptical that judicial review of legislation is compatible with democracy. I still think it can be. But as it is practiced, especially in the U.S., I think it tends to be fairly undemocratic. I don’t mean here that I disagree with Supreme Court decisions. I mean that specific ways in which our courts are empowered, and in which they wield power, are not very democratic.

I also became much more critical of the equal representation of states in the U.S. Senate (and the Electoral College for presidential elections). In principle, it is sometimes consistent with democracy to grant some people modestly more voting power to prevent certain kinds of neglect. But the inequalities in the U.S. Senate go far beyond this. The Senate may have been the best compromise available in 1787, but it is a substantial deviation from democratic equality.

Does the book offer any lessons for those concerned about the state of democracy?

JW: This book does not provide a blueprint for how to stop democratic erosion, or how to topple authoritarian regimes. It does provide reasons why we should support and promote democracy—whether “we” are officials, citizens thinking about how to vote, or activists in a democratic or a non-democratic country. And it provides some sense of what supporting or promoting democracy involves, in terms of institutions and social practices. Proponents of authoritarianism or democratic erosion often try to justify themselves, and many deny that they are anti-democratic. Perhaps the arguments of this book may be of use in combating those justifications and denials. Good arguments are only one small part of politics. But they may help some democrats to develop their sense of what they are striving for, and why it matters.

James Lindley Wilson is assistant professor of political science at the University of Chicago.