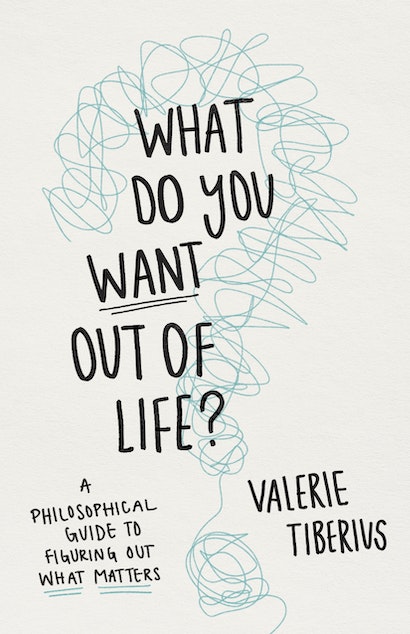 What Do You Want Out of Life?
Available in 3 editions
Buy This

“Don’t be afraid to fail big, to dream big,” said Denzel Washington. “Failing big” has been much in the news—it’s part of an exciting strategy that also includes “move fast and break things” and “no risk, no reward!” But what about failing small? Those of us who are not movie stars or big tech entrepreneurs are failing small all the time by some standard. We don’t meet our goals, we fall short of our objectives, we lose things, and our dreams shrink to fit the lives we live. How should we think about this kind of failure? The everyday kind that comes with getting older and being mortal? Should we embrace it?

That may sometimes be the best thing to do, but not always. In many cases, everyday failure can be reinterpreted—flipped—so that it isn’t failure at all. Think about the fact that people interpret success differently. I have many friends who bake. For some, being good at baking requires making cakes at the level of professional pastry chefs, but for others, they feel quite successful if they add their own twist to a cake mix. I also have friends who run. For some, finishing marathons or even ultra-marathons is the standard. Others count themselves successful if they run regularly even if not very far or fast.

Different people have different ideas about what it means to succeed in the activities they value. Since failure is the flipside of success, this means that we talk ourselves out of failure by talking ourselves into new standards of success. When you don’t have time for elaborate recipes, instead of seeing your Betty Crocker brownies as a failure, you can try to become that person who is happy with baking something that makes other people happy. When your knees are screaming that they cannot run more than 10 miles at a time, you can think of yourself as succeeding at continuing to run regularly rather than failing at running marathons.

This strategy is not just for hobbies like baking or running. It works well with careers. Think of a lawyer who starts out with the dream of becoming a supreme court justice. Statistically, he probably won’t make it, but he may nevertheless make a good contribution to the work of a respectable firm. At some point it would be a good idea for him to rethink what success in his career means to him so that he’s not a failed judge, but a successful attorney. The reality is, many of us have unrealistic standards of success for our careers when we’re young, but at some point need to think about what we really value in our work (whatever it is) and how we are living up to those values. For most of us, this won’t be by rising to the tippy-top of our field, inventing a world-changing product, or influencing the course of world history. Most of us are not Steve Jobs. But most of us can put a few drops of value into a big bucket of something that matters.

Now, you might be thinking that this sounds like selling out. Selling out, of course, has negative connotations, but changing your standards to fit reality isn’t the same as selling out. You sell out when you abandon what’s important to you for the sake of money and power, but flipping failure doesn’t ask you to give up what you value. Rather, it asks you to rethink what those values require. Of course, there are ways you could change your standards that would involve shamelessly lowering them. Tolerating unethical behavior (like lying to your clients or embezzling from your company) so that success in your career isn’t marred by immorality would be a bad kind of change. But this kind of change is not rethinking success—it’s just giving up on important values.

If it’s not selling out, isn’t it settling? We settle when we lower our standards—as you might settle for fries when they don’t have your favorite onion rings. But whether you describe yourself as lowering your standards or changing your standards is a matter of perspective. Think about “quiet quitting”—the new name for setting boundaries at work to avoid burnout. Is a quiet quitter who decides to forgo any promotion that would require being available 24/7 lowering their standards? What is the scale according to which working 80 hours a week is holding yourself to a higher standard? It’s certainly a scale the puts quantity over quality. Quiet quitters may do less, but they don’t have to do worse by doing less.

These concerns about selling out and settling raises an important point, however. We have to be careful in choosing our new standards of success. First, we often need standards of success that motivate us to improve and grow. If we set our standards at the point at which they are already met, we may be bored and uninspired. This may be particularly true in our careers: we need to be a little aspirational to keep working. Second, the values that we have are not open to any interpretation of success. You aren’t a good friend if your friends don’t think you are, you aren’t a good teacher if no one ever learns anything from you, and you’re not a good CEO if you steal from your company. Not everything is negotiable. Within these constraints, though, we have some flexibility to see ourselves as succeeding at the important things.

Are we psychologically flexible enough to be capable of flipping failure? We are, though it takes some work. Flipping failure involves a perspective shift and shifting your perspective requires both shaking yourself out of the old one and replacing it with the new. Our minds naturally return to the interpretations of success that are familiar to us—the ones we’ve had for years, or the ones that are pushed by our families and cultures. We have to work against this by reminding ourselves what really matters—in our work, our friendships, our families, our health—and how we stand up for and uphold those values in small ways every day.

Failing big is good advice: it’s good to dream and strive to do great things, even if you might fail. But “fail big, dream big” should be tempered by “succeed small and embrace it.” Small successes are not failures.

Valerie Tiberius is the Paul W. Frenzel Chair in Liberal Arts and professor of philosophy at the University of Minnesota. Her books include Well-Being as Value Fulfillment: How We Can Help Each Other to Live Well and The Reflective Life: Living Wisely with Our Limits. She lives in Minneapolis.