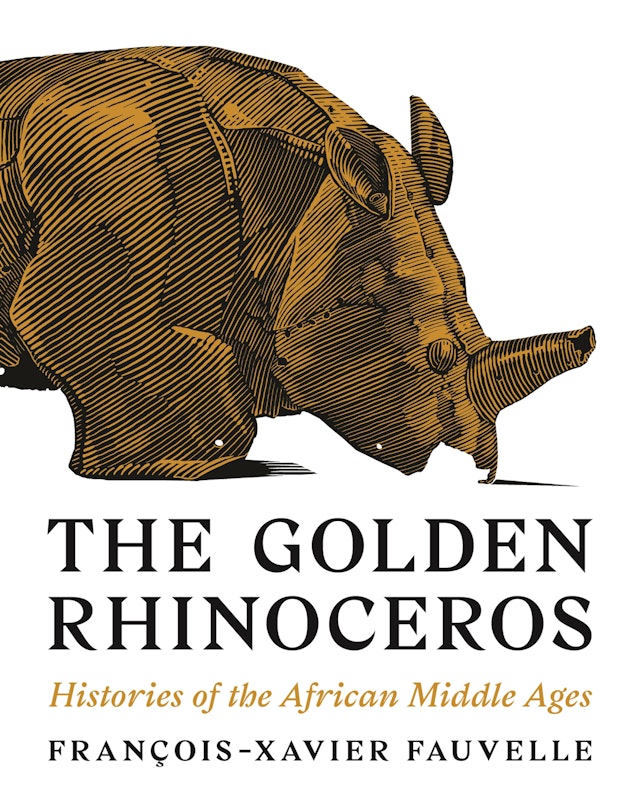 The Golden Rhinoceros
Available in 2 editions
Buy This

How did this book come about?

FXF: This book came about for two reasons. The first is scholarly. As an historian and archaeologist, I have worked in several regions of Africa (the Horn of Africa, South Africa, and countries on both sides of the western Sahara) and have been lucky enough to visit archeological sites in other places. My research has made me understand that despite the profound cultural differences between these different regions there existed a point of convergence: their participation in a global system of exchange during the Middle Ages. This phenomenon had similar and synchronous effects on several African societies, particularly their participation in religious, economic, political and architectural “conversations” with other powers of the time, notably within the Islamic world. The second rationale behind this book is civic. French president Nicolas Sarkozy’s speech in Dakar in 2007 where he claimed that “the African has not fully entered into history,” made me understand that there was a severe shortage of works on African history that were both serious and accessible. Some Africanist historians took it upon themselves to respond to this scandalous speech. For my part, what I found scandalous was not that this speech could be delivered, but that it was audible in our society, that there was room for it to be heard. For me, the blame lies with scholars rather than politicians. The Golden Rhinoceros attempts to address this by making what we know about medieval African history available to a large audience.

Is there a method to how you structured the book?

FXF: I have always been very sensitive to the argument of American historian Hayden White. He believed that historians generally narrate history in a conservative way. In my opinion, one of the conservative ways of writing the history of ancient Africa is to write it so that it conceals the characteristics of African societies and the available documentation in order to imitate the history of medieval and modern Europe. I wrote The Golden Rhinoceros to respond to a particular challenge presented by ancient African history: the fragmentary character of the written and archaeological documentation. Thus, this book is organized into small chapters that seek to embrace the fragmentary nature of the documentation by opening “windows,” but without covering up the lacunas, without leading the reader to think it is possible to tell this history in a linear fashion. I have also sought to lay out two different levels of reading: each chapter is followed by a short bibliographic essay that tells another story, that of the documentation.

How did the experiences of ordinary Africans of the Middle Ages differ from their counterparts in Europe?

FXF: This is a difficult question to answer because the written sources, primarily Arabic, which were produced outside of African societies, tell us mostly about capital cities, political elites, diplomatic relations, and the buying and selling of luxury merchandise. I have focused the book on these aspects, as they allow us to better observe the agency of African societies. Nevertheless, this approach sometimes opens small windows onto the lives of ordinary people. Take for example this request which was formulated before Sultan Sulayman of Mâli in 1352: a Muslim cleric had come from a village and presented himself before the sultan.  He said that locusts had spoken to him, saying that God had sent them to destroy the harvest because of the oppression reigning in the land. We have here a window, very small but very illuminating, onto the political order and the language in which recriminations regarding power in the medieval kingdom of Mâli were expressed.

What would you like readers to take away from this book?

FXF: I would like readers to understand that African societies were not “tribes” frozen forever in their landscape; that their social organization changed over time; that they participated in global exchange; that they created institutions and cities; that they adopted and adapted forms of religion coming initially from the outside, such as Christianity and Islam. That’s the first take away. There is a second: It’s one thing to understand that African societies have a history, it’s another to realize that medieval African societies were the contemporaries of the Islamic, European, Indian or Chinese societies of the period, and that they participated in a larger conversation. It’s why I speak of a medieval Africa that should be seen as part of a global Middle Ages that contained other provinces. For me, from the point of view of an Africanist, the goal is not, in the words of Dipesh Chakrabarty, “to provincialize Europe,” but to conceive of a multi-provincial world in which Africa has its place. Finally, a third take away: I would like for The Golden Rhinoceros to contribute to putting our knowledge of the history of Africa into the current conversation about history; to have it participate in the shared conceptions of world civilizations; and to influence teaching and discussion on the historical trajectories of societies and the methods of the historical discipline.

What did Africa offer during the Middle Ages that other regions did not?

FXF: Several very strong singularities should be highlighted. One is that forms of centralized power and the accumulation of prestige, sophisticated systems of exchange, and a cultural and material finesse existed without being accompanied by the widespread use of writing (except in Ethiopia). Another is that although the regions of Africa under discussion were not conquered by Arab armies in the seventh century, many of their societies, in any case their elites, adopted Islam because it allowed them to access a political, commercial, juridical and intellectual language common to the whole Islamic world (the Maghreb, Egypt, the Arabian Peninsula, and Persia). These political elites, as in Mâli for example, invented ways for Islam and local religions to coexist. This coexistence is also found at the level of the linguistic, economic, and technological diversity of African societies: it’s a characteristic of the longue durée in African history, which distinguishes Africa from other regions of the world that became culturally homogeneous to a higher degree when they were integrated into centralized political formations. But far be it from me to promote an angelic vision of African history: we must not forget that several of these societies (the Ethiopian kingdoms, for example) raided their neighbors to export slaves to the Islamic world.

Why do you think the history of medieval Africa has been neglected?

FXF: This is a complex question. The Arab authors of the Middle Ages had no problem admiring the political sophistication of the African kingdoms (such as al-Bakrî, who wrote approvingly of Ghâna in the eleventh century) or investigating their history (such as Ibn Khaldûn did for Mâli at the end of the fourteenth century), although the Islamic societies to which they belonged imported massive numbers of black slaves from these regions. In contrast, the slave trade practiced by the Europeans and their American colonies was accompanied by a monstrous ideology that not only negated the humanity of the captives, but also the singularity, and thus the historicity, of their societies. This negation has stealthily managed to install itself in modern mentalities. It lives on in multiple forms, whether it’s coldly saying that Africans have no history, or shutting away African art behind museum showcases with “ethnic” labels which lead one to think that objects produced by Africans reflect unchanging African “souls.” History is a remedy against such beliefs.