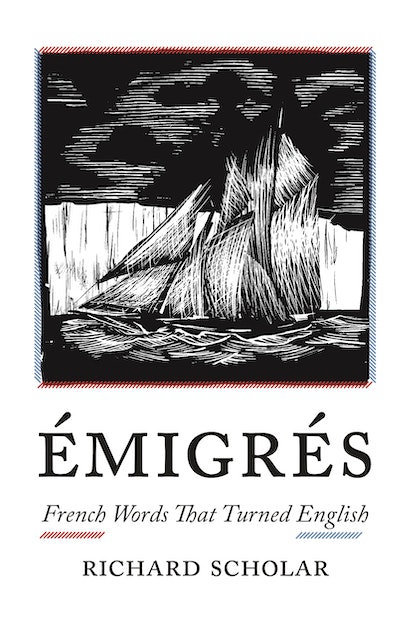 Émigrés
Available in 3 editions
Buy This

A summer walk through the garden of the English language reveals it sporting many a foreign flower. English has borrowed more words from French, in particular, than from any other modern foreign language. Think of phrases like je-ne-sais-quoi and déjà vu. Imagine English without naïveté, ennui, and caprice. These—and a host of other such words and phrases—have adorned English for centuries. Yet a nagging suspicion attends their use. Is it not a tacit admission of inferiority to lace your English with French foreign borrowings?

It is tempting to deny the proposition that English owes as much to French as it does. The risk in such cases, however, is that you will find yourself hoist with your own petard. George W. Bush is said to have claimed that ‘the problem with the French is that they don’t have a word for entrepreneur’.

Some of those who accept the proposition wish to rid themselves of its historic burden. In a comment piece published in The Times on 16 October last year, Giles Coren proposed that all the words English commonly borrows from French should be repatriated, on the grounds that they are ‘grotesque linguistic relics of our colonial exploitation under French rule’. Coren claimed in the article to be responding to an act of French linguistic purism sponsored by the Académie française. Yet he must have been aware, at the time of writing, that his witty proposal to take back control of the English language had Brexit written all over it. His proposal gave me a distinct feeling of what can only be described in English as déjà vu. In Émigrés I recall how, in the 1640s, the English political radical John Hare was already urging ‘that our Language be cleared of the Norman and French invasion upon it’.

In one crucial respect, Coren did this pestered isle too much honour. He claimed to be avenging a lexicon of native French terms that France’s culture ministry had just published in order to resist what he called the ‘British borrows’ that dominate the language of contemporary French fashion. Yet how British are they? Although a former Ralph Lauren employee, Coren conveniently overlooked the small matter of the role played by the US in the importation of English language and culture into French. The truth is that, with the US dominating the scene, Britain has lost its undisputed claim to the title of France’s bête noire.

It seems, though, that France still enjoys that privileged place in the British imagination. For as long as they have been around, gallicisms in English have aroused both hostility and admiration, symptoms of an unresolved ambivalence. The Restoration of 1660, which followed the Civil War and Commonwealth years, set a pattern that continues to underly attitudes in the Anglophone world. French was all the rage at the Restoration court of Charles II and among the rising middle classes. Restoration comedies are full of social climbers who, in the affectation of courtly manners, season their conversation with a soupçon of Gallic garniture. There were several reasons why these gallicisms were met with hostility in some quarters. Some were convinced that the classical languages, not modern vulgarities like French, should set the standards for English. The true bête noire of others was not the language of the French, but the dominating tendencies of their culture and society, whether religious (Catholicism) or political (absolutism). Others still in Restoration England, meanwhile, traced a middle way between what they considered to be a servile mimicry of French and a rejection of it they viewed as equally outré. English-speaking people of all sorts were coming into contact with French at this time. The foreign travel of wealthy and privileged English men and women enabled not only them, but also less socially privileged members of their entourage, to become conversant in modern foreign languages, particularly French, and au fait with French manners. And foreign trade required English people of varying social conditions to learn foreign tongues. One commentator quipped that, since there were now so many French words commonly used in English, ‘one had need to study French to speak good English’.

What this meant was that the question of whether and how it was proper to use French in English was uniquely placed to reveal wider attitudes in English society towards class, educational privilege, and sociocultural hierarchy. French borrowings in English sentences could not entirely escape the suspicion that they were the mark of a humiliating foreign takeover. Now as much as then, however, there was much more to them than that.

Perhaps the suspicion that French foreign borrowings excite is intrinsically linked to the creativity that they also occasion in speakers and writers of English. In Émigrés I write not so much in defence as in illumination of French émigré words as they have been used, abused, and reused in Anglophone cultures all over the world. Such words matter to me, not as self-sufficient objects, but for the stories they tell of what it is to live a human life in history and for the role they play in the making of concepts, practices, and forms in and across cultures. I treat the particular words I study in detail as points of access into a wider exploration of the processes of translingual and transcultural migration in literature and its sister arts. This, then, is a book about translation and its other. Above all, however, it casts light on those untranslated French words that have variously “turned” English, creating it anew, causing controversy and arousing suspicion in the process.