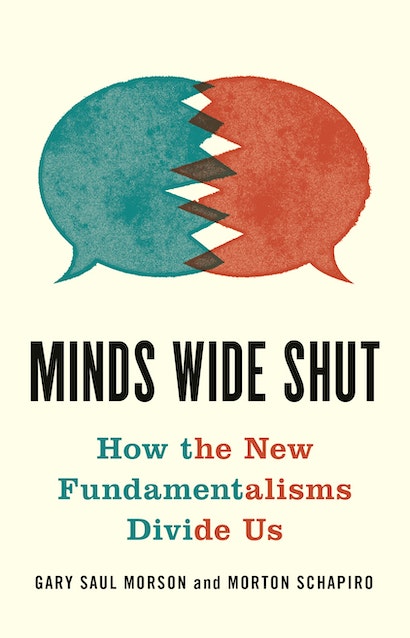 Polarization may be pushing democracy to the breaking point. But few have explored the larger, interconnected forces that have set the stage for this crisis: namely, a rise in styles of thought, across a range of fields, that literary scholar Gary Saul Morson and economist Morton Schapiro call “fundamentalist.” In Minds Wide Shut, Morson and Schapiro examine how rigid adherence to ideological thinking has altered politics, economics, religion, and literature in ways that are mutually reinforcing and antithetical to the open-mindedness and readiness to compromise that animate democracy. In response, they propose alternatives that would again make serious dialogue possible.

The level of incivility in public life seems to be getting worse and worse, with some observers lamenting not just a fracturing of American society, but also a real threat to our most precious institutions. How does this book address these dangers?

Morton Schapiro (MS): We are at a moment when dialogue withers and righteous indignation abounds. People who agree on little else share a revulsion against real, open discussion. We are witnessing dueling monologues of shouting and abuse among those who are certain that they can’t be wrong, and that they have nothing to learn from their opponents who must either be evil or deluded. And the twin crises of the past year—the pandemic and the long overdue reckoning with anti-Blackness—demonstrate that the dialogic spirit is more important, if more elusive, than ever. Anyone who thinks that our nation’s democracy isn’t in grave danger need only reflect upon the almost inconceivable horror of January 6th at our nation’s capital.

Gary Saul Morson (GSM): And the scariest thing is that these critical institutions may have reached a breaking point. Minds that work the way Morty just described are dangerous and inherently anti-democratic. There is no reason NOT to have a one-Party State if truth and justice are all on one side.

Why do you label this mentality as “fundamentalist”?

GSM: That term traces back a century to a series of pamphlets called “The Fundamentals,” which defended what the authors took to be the most basic Christian beliefs, including the infallibility of Scripture. But over time it has come to be used as a pejorative. At the heart of that charge is that no evidence could possibly persuade fundamentalists that their views might be wrong. That mentality can be shared by secular philosophies as well. As the philosopher of science Karl Popper famously remarked, the propositions of any true science must be open to disconfirmation. Fundamentalist views preclude falsification, as the possibility of counterevidence is ruled out in principle.

Is fundamentalism on one side of the ideological divide?

MS: Not at all. It is unfortunately escalating both on the right and on the left. It flourishes across the political and social spectrum, and we believe that larger, interconnected forces have set the stage for fundamentalist thinking across a wide range of disciplines. And we argue that there are alternatives to these new fundamentalisms, and that if we cultivate them, we can promote a world where thoughtful conversation is possible, wiser solutions can be reached, and democracy can be renewed. And one additional thought: history shows that once intellectuals and civic leaders condone or rationalize away the excesses of the true believers on their side, anything can happen. Positions that are inconceivable one year become fringe the next, and then mainstream.

You mention that fundamentalism is on the upswing in a number of areas. What are some examples?

GSM: We devote chapters to four areas—politics, economics, religion, and the study of literature. Each of those chapters lays out how fundamentalist thinking undermines our ability to learn from each other and move towards fairer and more effective policies. Here is one example from our chapter on politics: outrage leads not to compromise but to stalemate. It means ignoring objective evidence and living in a world where basic facts, open to reasonable standards of verification, are instead accepted on the basis of each side’s interest. If you are convinced you know the truth, why look at the data? So if, for example, you are an environmental purist, believing that any carbon use is a sin, you ignore the fact that eliminating it would have profound economic and social costs. And I use the word “sin” deliberately. Social problems are treated in terms of moral absolutes when in fact trade-offs are necessary. The Latin proverb “fiat justitia, pereat mundus” translates as “Let justice be done, though the world perish.” It expresses the dangerous idea that a just decision should be made at whatever cost in terms of practical consequences. Monks, missionaries and other moralists do not do cost-benefit analyses designed to reduce the most sin with the least effort. They think theologically, not practically. There are no tradeoffs among the Ten Commandments and increasingly in public policy.

MS: Let me give an example of the consequence we pay for this type of thinking in my own field, economics. Empirical analyses are ignored when fundamentalists know the “truth.” But economists, regardless of their own ideological beliefs, agree on much more than the public might assume—from environmental policies, to tax policies, to trade policies. Here is one specific example: 45 million people owe over $1.5 trillion in college loans, more than credit card debt and twice the amount that was owed in 2009. Some of that clearly is the result of fraud and should be addressed. But the vast majority is not, and the rush to forgive college loans ignores the obvious fact that it would mean that all taxpayers pay if off, with the undereducated poor subsidizing their better educated, more affluent, peers. But that doesn’t matter for fundamentalists if debt, like pollution, is a sin. And the data are clear—55% of those 45 million people owe relatively modest amounts, $20,000 or less. While some left college with loans but not a degree, 69% of those debtors got degrees. Moreover, more than half of those with college loans reside among the richest 40% of all Americans, with 28% in the richest fifth of all families. And 31% of the $1.5 trillion is held by former students who enrolled in graduate or professional school programs. If we relieve debt for those with MBAs, MDs and JDs, or those with undergraduate degrees who are presently among the most affluent of all Americans, why not have taxpayers chip in to pay off mortgages, car loans and credit card debt as well. Isn’t a sin, a sin?

You seem to be arguing that fundamentalism is a particular way of thinking, a way that leads to bad decision making.

GSM: Exactly. That great intellectual historian Isaiah Berlin divided thinkers into two categories: hedgehogs, who are convinced that they have discovered a big truth that explains everything, therefore leaving little room for fruitful discussion; and foxes, for whom there are many competing truths. The people we call fundamentalists are the hedgehogs of today.

Are you arguing that everything should be on the table; that NOTHING you believe should be beyond questioning?

MS: We believe that there is some degree of fundamentalism in us all—that there are areas where we unequivocally know that we are right, and it is therefore impossible to convince us otherwise. For me, as an observant Jew, there is nothing that could cause me to question the existence of a benevolent God.

GSM: And for me, I believe in the existence of an external world and that we cannot know everything about it. And it is hard for me to imagine the evidence that would get me to doubt the fact that, despite the view of influential critics, there is genuinely such a thing as “great” literature, as exemplified by the novels of my favorite writer, Leo Tolstoy.

But doesn’t that make you fundamentalists?

MS: One of our reviewers, Judith Shapiro, former president of Barnard, quoted a friend who put it this way—we want to keep our minds wide open, but not so wide open that our brains fall out. We should all recognize that there are certain beliefs that are beyond question, but that most should be open to debate.

It would seem that recognizing your own fundamentalism might be a first step in moving beyond the current state of anger and distrust. What are some others?

GSM: Too many of us live in echo chambers, hearing our words and the words of those like us played back, reinforcing our own opinions rather than challenging them. While living in silos might bring us short-term comfort, it demands all too little of our minds. Liberals can learn something from watching Fox News, and taking seriously articles, books, and op-eds written by thoughtful conservatives; conservatives can do similarly with CNN, the New York Times, and the like. We should insist—even to those with whom we agree – that, in the words of John Stuart Mill, “He who knows only his own side of the case knows little of that.”

MS: Perhaps banishing politics from “polite” conversation is a bad idea. We all have friends and family who think our views are ludicrous. Listen to their arguments. It just might be the case that at your post-pandemic holiday dinner table, your benighted uncle will have something important to say. It is hubris to believe that your side is always right when nothing in human experience shows that to be true of anyone. And listening to him could leave you less shocked the next time your preferred candidate—who can’t possibly lose the election—does.

Literature plays a major role in the book, with many examples of how it could help advance discussions in each of the fields you consider.

GSM: Very true. We argue that engaging with literature can help us move beyond fundamentalism into true understanding. Right now, what unifies so many fundamentalists isn’t what they think, but whom they despise. The key is to understand each other better, and realist fiction, in particular, provides us with a master class in empathy with those unlike ourselves. By identifying with characters, we sense from within what it is like to be someone else, to see the world from the perspective of a different social class, gender, race, religion, sexual orientation and expression, moral understanding, and the other categories that define and differentiate human life.

Is there any reason to believe that we have reached a tipping point, with progress surely ahead? Building on the words of Leon Trotsky, might we eventually relegate fundamentalism to the “dustbin of history”?

MS: Democracy depends on honest disagreement. But in a fundamentalist world, everything becomes a zero-sum game—whenever someone gains, the other loses. Then the only thing more reprehensible than adherents to the opposite view, is the person who seeks compromise. The idea of a principled middle ground seems like cowardice or intellectual inconsistency. But our new president built a career based on compromise. So I have hope that a vastly different “tone at the top” will herald in a new era.

GSM: With rising fundamentalism all around us, “hate thine enemy” is the catchphrase of the day. As Chekhov wrote so presciently, “unhappiness does not bring people together but draws them apart.” The dangers should not be underestimated, but there is also room for hope. Returning to Isaiah Berlin, as we at long last prepare for a post-pandemic age, may it be a foxy one.