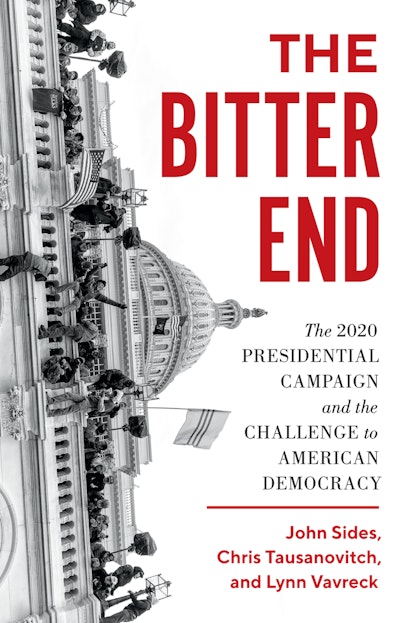 The Bitter End
Available in 2 editions
Buy This

In only a few months, the Supreme Court’s decision in Dobbs v. Jackson Women’s Health Organization—in which the Court majority invalidated the constitutional right to an abortion established almost 50 years ago—has scrambled the political landscape. The midterm election now looks less unfavorable to Democrats, and one possible reason is the backlash to the decision.

Abortion policy is also in flux. In particular, Republican-controlled state legislatures have rapidly pushed for restricting abortions, including policies that allow few, if any, exceptions. This conservative push also flies in the face of public opinion: not only does the majority of Americans oppose the Court’s decision, but it also favors legal abortion in the first trimester and supports exceptions for circumstances like rape or incest.

Our research on Americans’ political priorities helps illuminate the evolving politics of abortion. First, our evidence shows why abortion could matter in this election: because it actually matters to people. Second, that evidence helps explain why hard-line Republicans are carrying the day in some states: they simply care more about the issue than do moderate Republicans.

We begin with a venerable idea from the study of political behavior: cross-pressures. The notion, which dates to some of the earliest quantitative work on public opinion and voting, describes people whose political values and identities are in tension. A classic example is a Democrat or Republican whose position on an issue is out of step with their party.

But being cross-pressured means more than just being out of step. It means being out-of-step on an issue that you consider important. If the issue isn’t a priority to you, then you are “cross-positioned” relative to your party but not really cross-pressured. Indeed, you might not even know that your position is different than your party’s.

We use a research design called a conjoint experiment to measure Americans’ political priorities and thus identify whether cross-positioned people are truly cross-pressured. In the July 2019-January 2021 Democracy Fund + UCLA Nationscape survey, which surveyed approximately 500,000 Americans, we asked people whether they supported or opposed forty-four policies, such as instituting universal background checks for gun purchases, raising the minimum wage to $15 an hour, and providing a path to citizenship for undocumented immigrants.

Then we randomly selected policies from that list and presented respondents with two competing “packages” of between two and four policies. The packages sometimes had exclusively liberal or conservative positions and sometimes a mix. Respondents had to choose which package they preferred. These choices reveal the importance of each issue—that is, how much more likely people are to choose a set of policies when it includes that issue.

These experiments showed, first, that the issues that Americans believe most important tend to exacerbate their differences, not mitigate them. Some of the most salient issues to Republicans were opposing Trump’s impeachment, building a border wall, restricting abortion, and fighting reparations for slavery. Democrats’ priorities included impeaching Trump, opposing Trump’s restrictions on immigrants from Muslim-majority countries, and abortion rights.

By contrast, the issues on which there was more bipartisan consensus were generally less important to voters. For example, most Democrats and a significant number of Republicans favor raising taxes on the wealthy. In 2019 Nationscape surveys, 38% of Republicans wanted to raise taxes on those making at least $250,000. But for both parties, tax policy was less important than issues like abortion and immigration.

A second finding was this: cross-positioned partisans are not necessarily cross-pressured. In fact, it is often the partisans whose issue positions are in line with the party who prioritize the issue more, relative to those who are cross-positioned.

One example for Republicans is the border wall. In 2019, 71% supported it, 17% did not, and 12% were unsure. But the importance of the issue for those who supported was over 1.5 times larger than for the minority of Republicans who opposed it. Indeed, on about three-quarters of the issues in the survey, Republicans who had a more orthodox conservative position prioritized the issue more than did Republicans who took the liberal view and were thus cross-positioned.

This brings us back to abortion. In the Nationscape surveys, we asked respondents whether they supported or opposed “never permitting abortion.” This was not a popular policy overall, even among Republicans: only 29% supported it, while 54% opposed it and 18% were unsure. But to that 29%, the issue was twice as important than it was to the majority who opposed it. This suggests that the most anti-abortion Republicans are likely to care far more about getting their preferences translated into law, even if their views place them at the fringe of the party. In turn, their activism may help explain why hardcore pro-lifers are carrying the day in these GOP-controlled state legislatures.

These Nationscape experiments also showed why the Democratic backlash to Dobbs was not unexpected. Among Democrats, not only did 75% oppose banning abortion, but this was one of the most important priorities for Democrats among all the issues in the survey.

This wasn’t true for all abortion policies: for example, Democrats were more evenly divided on whether to require a waiting period before obtaining an abortion, and supporters and opponents of a waiting period tended to prioritize it equally. So what the Dobbs decision and the resulting state bans have done is shift abortion politics onto a dimension that helps to unite and motivate Democrats.

Of course, all of our evidence predates the Dobbs decision itself. It is possible that things have changed. For example, more recent surveys show that abortion has become an increasingly important issue to Democrats. If we were to repeat our experiment, we might find that opposition to banning abortion is now an even bigger priority.

Republicans are also rethinking their own approach to the issue. Some state legislatures are balking at hardline policies, and Senator Lindsay Graham’s proposed federal ban on abortion after 15 weeks appeared only to divide the GOP further. This could signal a shift in the Republican voters’ priorities as well: perhaps those Republicans who oppose abortion bans now consider the issue to be more important, providing counterweight to pro-life hardliners in the party.

In short, our evidence shows why political priorities matter—and how the difference between being cross-positioned and cross-pressured can illuminate the internal politics of both major parties. A key question for the future is how those priorities will shape policymaking on abortion and beyond.

John Sides, Chris Tausanovitch, and Lynn Vavreck are political scientists and the authors of The Bitter End: The 2020 Presidential Campaign and the Challenge to American Democracy.