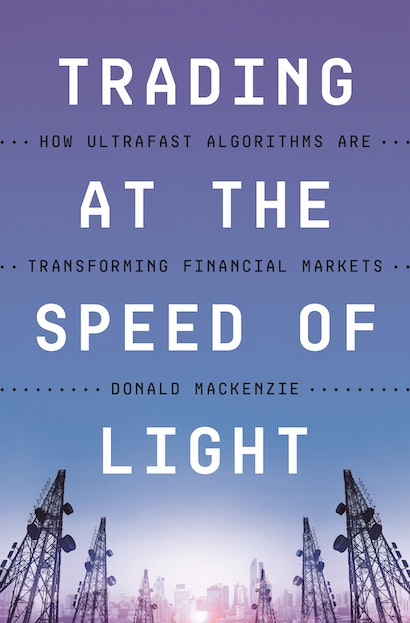 A geodesic is the shortest path on Earth’s surface between two given locations. From a professional trader’s point of view, the locations that nowadays matter most are not exchanges’ historic city-centre headquarters, but a couple of dozen unremarkable, mainly suburban buildings in the Americas, Europe, and Asia, buildings that usually could pass for a warehouse. Most of today’s frantic automated transactions take place in these anonymous computer datacenters, making the geodesics among them the site of intense technological competition.

The participants in that competition measure time in nanoseconds: billionths of a second. A nanosecond is an almost unimaginably short time: during it, the fastest physically possible signal, such as a pulse of light passing through the vacuum of deep space, can travel only around 30 cm, or roughly a foot. Up until 2010, the quickest way of sending information from one datacenter to another was through fibre-optic cable, and a new, more direct fiber-optic cable had just been laid to connect Chicago’s futures markets to the New Jersey datacenters in which shares, currencies, and sovereign bonds are traded. But a light signal in a fiber-optic cable is slowed by the glass of its core to around two-thirds of its speed in a vacuum.

In contrast, a pulse of light or a radio signal travels through the atmosphere at almost that maximum speed. Signal attenuation and the Earth’s curvature, though, mean that only the closest pairs of datacentres can be directly linked in this way. In other cases (for example, between Chicago and New Jersey, and often, too, among the New Jersey datacenters), repeater equipment on towers or tall buildings is needed. If you own a structure of this kind that just happens to be at the right point on one of the crucial geodesics (even if it is, for example, deep in the rural Midwest or in an unprepossessing postindustrial district of New Jersey), you’ve got a winning lottery ticket. Competition to get as close as possible to the geodesic means that the speed-race competitors will be prepared to pay a lot to get their wireless antennas or atmospheric lasers installed in precisely the right location.

A particular focus of the competition is on where exactly the final antennas in a wireless link are, because everyone wants to minimize what they call “fiber tail”: the  unavoidable last few meters of “slow” fiber-optic cable that take the signal from those antennas into the datacenter building. You would like those antennas to be on the pole or tower that’s closest to the datacentre, and restrictions on access to that structure can cause sharp dispute. Best of all is to be able to place antennas on the datacenter’s roof.  Some exchanges, however, prohibit that, while others allow only certain firms to have access to their datacenters’ roofs. Nor are all places on a roof equal: some are closer than others to points at which cable can be run down into the building, while a particular corner may be ideal for transmitting and receiving signals along a crucial geodesic. I’ve been told that when one exchange made spaces on its roof available for rent, those that were best for “pointing [antennas] in the right direction went very, very quickly.” A small number of firms “bought [them] all up … It was like a land grab.”

The speed race along the geodesics brings with it a surprising sensitivity of today’s financial trading to contingencies of the physical world such as weather. Because the microwave radio frequencies least vulnerable to rain are congested in the vicinity of the geodesics, higher frequencies often have to be used, meaning that links can fail when it rains heavily, for example as the links between Chicago and New Jersey pass over Ohio and Pennsylvania. The lasers that flash financial data above the heads of the residents of northern New Jersey are vulnerable to something even more mundane. Bird droppings can stick to the glass of the lasers, although I’m told that at considerable cost (and, in tests, using honey as a close substitute for bird drop), a coating has been developed to which those droppings will not stick.

When, ten years ago, I started researching today’s automated “high-frequency trading” or HFT, I assumed that trading algorithms’ actions would be informed by subtle, complex patterns of data discovered using sophisticated machine learning. That’s sometimes so, but the signals crucial to HFT are often much simpler. If, for example, the prices of futures contracts on the Standard & Poor’s 500 share index, which are traded in Chicago, suddenly rise, then – a tiny fraction of a second later – so too will the prices of the exchange-traded funds that track the same index (these ETFs are traded in New Jersey). Even something as simple as a growing imbalance between the number of bids to buy a financial instrument and the number of offers to sell it can be highly informative.

The existence of simple signals of this kind is public knowledge in the world of HFT, and this largely explains the extent of the pressure on HFT firms to have the fastest possible technologies and communication links. The algorithms that are quickest to react to such a signal can profit, while a slower algorithm may lose heavily. Speed races of this kind happen far more often than you might think. Using London Stock Exchange messaging data that are not normally accessible to researchers, Matteo Aquilina and Peter O’Neill of the UK Financial Conduct Authority, along with the University of Chicago economist Eric Budish, found that a race of this kind takes place on average about once a minute in each of the leading 100 stocks traded on that exchange. They estimate that across stock markets globally around $5 billion is won or lost annually in these races, and that forces participants to give speed a huge priority. The prize doesn’t by any means all take the form of profit for HFT firms. Much of it ends up being spent on ultrafast computing and communications, and the need for speed means that exchanges are able to charge trading firms high fees for services such as the fastest datafeeds and provision of the “crossconnect” cables within its datacenter that trading firms’ computer servers need in order to be able to communicate with the exchange’s system.

It shouldn’t be imagined that expensive speed races are somehow inherent in sophisticated, high-tech trading. As Budish has argued, speed races are fueled by how markets are configured, in particular by the fact that trading is continuous in time (an algorithm can trade any nanosecond, even though the vast majority of nanoseconds witness no trading whatsoever) rather than taking the form of auctions that occur at specific points in time. A comparison that shows this is between financial trading and online advertising. The latter is also a huge, high-tech automated business. But if I Google something of commercial interest, visit a news website, or browse a social media platform, what gets triggered is an auction, not continuous trading. Billions of these auctions happen every day, but because each of them is a point-in-time event, in which algorithms can have as much as a tenth of a second or more in which to bid (an eternity, on HFT’s timescale), online advertising is not characterized by the extreme speed race found in finance. The issues that are of concern in digital advertising – such as intrusive data collection and oligopoly – are different.

Among the lessons I would draw is the importance of what I call “material political economy.” We are used to the idea that economic systems are political in a broad sense: how economic life is organized influences, and is influenced by, the distribution of income and wealth, while government regulatory bodies, for example, are not simply neutral referees, but the object of often intense lobbying. But politics can also be found woven deeply into the fabric – the material fabric – of economic life. My book, Trading at the Speed of Light, tells the story of how that entanglement has played out in the world’s most important financial markets.

Donald MacKenzie is professor of sociology at the University of Edinburgh. His books include Inventing Accuracy: A Historical Sociology of Nuclear Missile Guidance and An Engine, Not a Camera: How Financial Models Shape Markets.