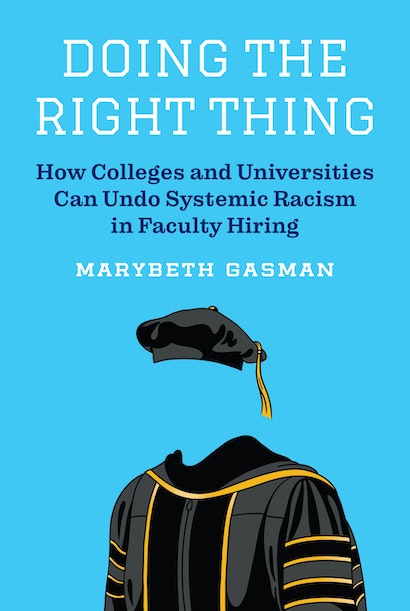 Doing the Right Thing
Available in 2 editions
Buy This

The United States is amid a reckoning; it is being judged by its citizens for the world to see. Its institutions and organizations, which have been touting their commitment to racial and ethnic diversity, have been confronted overtly. Hollow statements that have long masked missing representation, and failed inclusion efforts, are no longer believed or accepted.

People from all racial and ethnic backgrounds are challenging the efforts and commitments of those in power in corporations, the military, the police, the government, arts organizations, entertainment, the legal system, publishing, media, education, and many other areas. They are asking for movement, action, and proof that our nation’s institutions are serious about embracing racial justice and dismantling systemic racism.

Higher education is not immune to this criticism and call to action. In fact, like all our institutions, colleges and universities are responsible for clinging to sameness, and creating and upholding systems that perpetuate the status quo and fail to foster equity. From my perspective, given their commitment to diversity and “academic excellence,” they must lead the way to racial justice and equity instead of being dragged along kicking and screaming as they hold tightly to the past.

Colleges and universities in the United States are admired around the world for their research, innovation, and academic excellence. In recent years, many institutions of higher education have even been lauded for their increased diversity in enrollment at the undergraduate level.

Racial and ethnic diversification has advanced in undergraduate student populations across the country and even at the nation’s most prestigious institutions. Yet these colleges and universities—which boldly proclaim a dedication to overall diversity and excellence in their public statements, strategic plans, and on their websites—fail at achieving diversity (and thus excellence) among their faculty. Of all full-time, tenure-track, and tenured faculty in degree-granting postsecondary institutions in 2017, 41% were White men; 35% were White women; 6% were Asian/Pacific Islander men; 5% were Asian/Pacific Islander women; and 3% each were Black men, Black women, Hispanic men, and Hispanic women. Those who were American Indian/Alaska Native and those who were of two or more races each made up 1% or less of full-time faculty.

While colleges and universities are criticized by some for sacrificing excellence for the sake of diversity across various aspects of their institutions, they are not aggressively pursuing racial and ethnic diversity among their faculty, nor are these ideas at the core of their definitions or understandings of excellence. Yes, colleges and universities call for “inclusive excellence,” but typically this phrase is in place to assure critics that the only way that diversity will be pursued is if that diversity adheres to the criteria and pedigree deemed acceptable by those in power, namely Whites. Colleges and universities—as well as their faculty—that purport to be the best in the world, that brag about their U.S. News and World Report rankings, and that hold fast to the belief that they truly want racial and ethnic diversity across all aspects of the academy must follow through on their promises. To date, they have not been genuine in terms of diversifying the faculty and eliminating the idea that Whiteness means excellence.

Let me provide an example to help you understand my argument.

A professor asked me the following question:

What would happen if the very definition of excellence were broadened to be more inclusive? What if universities reconceived their notions of academic excellence to have meaning only if racial and ethnic diversity are centered in these definitions? What would happen if faculties used the power that is linked to their shared governance voice—their contributions to university decision making—to foster justice and equity with regard to their ranks? What would result if faculties realized that diversifying their ranks is their responsibility and that not doing so is evidence that they don’t support and are intellectually lazy about issues of equity? And how would the academy change if faculties realized, acknowledged, and grappled with the role that they play in upholding systemic racism in the academy, and especially within the faculty hiring process?

These questions and more are at the center of my evidence and arguments in Doing the Right Thing: How to Undo Systemic Racism in Faculty Hiring, and I aim to convince readers that faculties have the power to change this system that privileges Whiteness and rewards measures of excellence rooted in systemic racism.

Marybeth Gasman is the Samuel DeWitt Proctor Endowed Chair in Education and a Distinguished Professor at Rutgers University. Her books include Making Black Scientists and Educating a Diverse Nation. She lives in Philadelphia. Twitter @marybethgasman Instagram @marybethgasman