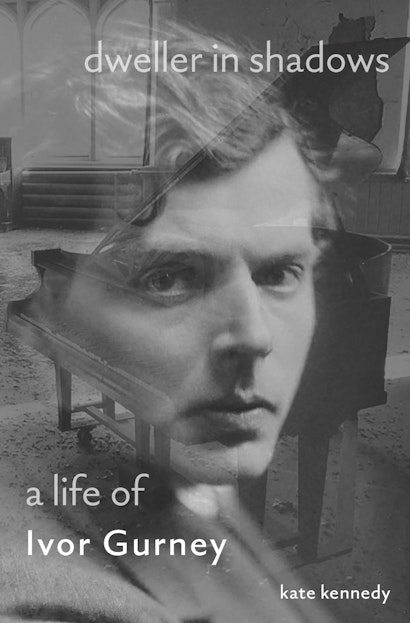 Dweller in Shadows
Available in 3 editions
Buy This

Contrary, perhaps, to expectation, few of us have produced great volumes of work in lockdown. Whilst many academics might previously have craved a moment out of time, for the world to stop and for them to have time to think, it doesn’t seem to have prompted the hoped-for avalanche of creativity. Not so for the poet and composer Ivor Gurney (1890–1937), who found himself locked down against his will for the last 15 years of his life. His lockdown, in a lunatic asylum, prompted literally hundreds of manuscripts: letters, poems, essays, play scripts, chamber works and songs. While the vast majority of them remain unpublished, these are among his best work.

Gurney had been studying at London’s Royal College of Music in 1914 when, as his fellow student and composer Arthur Bliss put it, ‘the crash of a European war on our beaches pulled us all into its undertow’. Gurney enlisted, and survived Ypres and a winter on the Somme, but only just. He was shot, and gassed, and came close to breakdown. By the time he was invalided back to the UK, he was a physical and emotional wreck.

However, contrary to the version of his life put about by his friends after his death, it wasn’t the war that triggered his mental health problems. The sights and sounds of the Western Front were hardly conducive to stability, but Gurney had already suffered a breakdown at music college; in fact, he had enlisted to try to cure himself of his ‘neurasthenia’, as he called it. The structure of army life had held him together, and the routines and physical exhaustion were, perversely, better for him than his solitary existence as a composition student. The new and intense experiences of warfare and camaraderie prompted a stream of poetry that formed the basis for his first two collections of verse, Severn and Somme (1917) and War’s Embers (1919).

His return to civilian life saw, in his words, a ‘white heat’ of creativity, as he took advantage of safety to write songs, poetry and chamber works. But his behaviour was becoming increasingly alarming. By 1922 he would sit with a cushion on his head to ward off the rays of electricity he believed tormented him, and walk from police station to police station asking for a revolver with which to shoot himself. And so in September 1922 he found himself locked in a lunatic asylum. Barnwood House was a genteel home on the outskirts of his home town of Gloucester. The staff quickly found they couldn’t cope with Gurney’s repeated and dramatic escape attempts, so he was transferred to the infinitely less comfortable vast county asylum in Dartford, on the outskirts of London.

The City of London Mental Hospital near Dartford resembles a great, red-brick Victorian prison which, in many ways, is exactly what it was. Gurney’s life at the centre of the literary and musical circles of London had ended. He was cut off from his colleagues, from his friends, and from live music making. He had access to a wireless, but hospital staff changeover times meant that the patients were put to bed at an unreasonably early time, so he missed the evening concerts on the BBC, including broadcasts of his own compositions. His most famous works, such as the song ‘Sleep’ and the song cycle Ludlow and Teme, were performed, but he was never in the audience. In his little cell-like room, with an iron bed and barred window, he had a bookcase of music scores, but could not bear to read them. To Gurney, without the possibility of hearing them performed, they were ‘poor, unmouthed creatures’—a metaphor perhaps, for his own predicament. And yet, he was not silenced. He wrote, and wrote, and then wrote some more. He had unlimited access to paper, and whilst he was initially denied a pen—a pen nib, mental hospital manuals from the time inform us, is a prime object with which a patient might slit his wrists—he did at least have a pencil.

Gurney was, in effect, writing for his life. He wrote in order to hear his own voice when, as far as the external world was concerned, he had been silenced. He wrote to affirm who he had been, who he still was, and to ward off the madness that threatened to consume him. The voices in his head tormented him, but while he could still create, he could keep the voices at bay.

The institution in which he was held was as much a threat to his fractured sense of self as his illness. On admission, his identity had changed from Ivor Gurney, acclaimed war poet and composer, to patient no. 6420. His medical notes record his achievements with a note of suspicion, as if they were symptoms of his delusion rather than the facts of his life. ‘The patient is said to be musical’, his doctor writes. ‘The patient prays for death. He claims to have been assistant organist at Gloucester cathedral.’

For me, as his biographer, one of the most fascinating aspects of Gurney’s tragic life is this long eventless period of creativity. How does one write when no one is listening? What kind of terrible liberation does an asylum afford, when the artist doesn’t have to worry about publication, or the critics’ response to their work? There is only one previous biography of Gurney, written in the 1970s, and his life in incarceration is skimmed over in a handful of pages. Biographers like to move from one event or date to the next. And for the majority of Gurney’s adult life, there are few, if any, events to punctuate the monotony. During the research for Gurney’s biography, I spent many months immersed in asylum archives, looking through everything from scrapbooks kept by the superintendent to record visiting entertainments, to the committee meeting minutes, where the minutiae of asylum life were recorded. As I examined records of the deaths, the escapes, the treatments, the Christmas pantomimes, and even the prizes won by the poultry on the asylum farm, a more nuanced picture of Gurney’s time in Dartford gradually emerged. After some time, I found I could situate his often strange, frequently brilliant writing and composition against a backdrop of light and shade, and start to understand his creative response to his new and extreme permanent lockdown. The result is, I hope, a more detailed understanding of the only great writer to speak on behalf of a generation of damaged ex-servicemen incarcerated after the war. A man who, with his ability to write and compose, could tell us, in two genres, what it meant to be deprived of the landscape of home, what his suffering felt like, and demonstrate the power of creativity to fight back against the bleakest of situations.