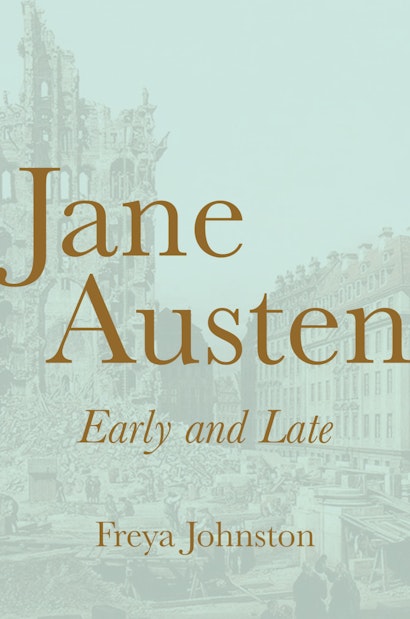 Jane Austen, Early and Late
Available in 3 editions
Buy This

There is an excellent cartoon, first published in Punch magazine, that depicts Jane Austen sitting in her publisher’s office and getting what we might call some mixed feedback on her latest submission: ‘We like the plot, Miss Austen, but all this effing and blinding will have to go’. Although she’s sitting just as we might expect, demurely in place, bonnet on her head and face discreetly averted, this image of the author seems to be entirely at odds with the real one. How could our beloved Aunt Jane—the prim, village-bound spinster—be guilty of ‘effing and blinding’, of swearing at and offending her readers? Could we even imagine a work by Austen that was full of filth?

As it turns out, we don’t have to, because the real Jane Austen did write such works herself. Her earliest compositions, begun when she was about eleven, contain rude language, adultery, murder, theft, madness, and suicide. People thump and kick each other, jump out of windows, go on the run, raise armies, escape prison, and watch their friends and husbands die in front of them. All of this is played for laughs. Why don’t we know more about this version of Jane Austen?

In 1817, months after her death, Austen’s brother Henry published an account in which we discover for the first time the now familiar figure of his sister as a kindly, quiet, modest, and pious woman who was (as he put it) ‘faultless’. A century later, Virginia Woolf observed that:

Anybody who has had the temerity to write about Jane Austen is aware…that there are 25 elderly gentlemen living in the neighbourhood of London who resent any slight upon her genius as if it were an insult offered to the chastity of their aunts.

That way of presenting and preserving Austen’s genius—as that of the nation’s spinster aunt; chaste, house-bound, decorous—was one that generations of her family as well as of her editors, critics, and readers were eager to continue. It continues to exert a strong influence on public conceptions of the author. Her first works loudly and overtly challenged such a view, and the Austens were therefore very reluctant to allow them into the public domain.

In 1869, her nephew and biographer James-Edward Austen-Leigh, in a faintly off-putting tone, wrote of the ‘transitory amusement’ which Aunt Jane’s ‘juvenile effusions’ supplied ‘to the family party’. In other words, these early compositions were not meant to last; and they were certainly not to be given the status of the printed novels—the true basis for Austen’s fame. Twentieth-century critics continued to talk about the early works in the same disparaging tone—as if those first stories were upstart rivals to the later works of genius.

As late in the day as 1989, the great grand-daughter of James Edward Austen-Leigh and co-founder of the Jane Austen Society of North America was confidently imagining that Austen herself must have felt ‘ashamed’ of her early writings. She argued that the juvenilia ‘could well have been left…in a drawer, for study by scholars, who I venture to suspect are pretty much the only people who ever really peruse them’. Yet the appearance of these tales suggests that their author thought about them rather differently. And if Austen really had felt ashamed of her teenage work, why didn’t she simply destroy it rather than take such pains to preserve it—even after she became a published author? The three volumes of early writing cleverly impersonate, in their appearance, real books that could have been printed and circulated to a far larger audience than a ‘family party’. I think they may even have been designed from the start for publication.

We might also interpret the juvenilia as continuous and compatible with the rest of Austen’s career, rather than as a merely immature form of writing that she left behind in order to become a successful novelist. The early works remain to this day somewhat under the radar even among Austen’s biggest fans, partly because the first substantial collection did not appear in print until more than a century after her death. You can see why they might have been an embarrassment to her family, who retained control of the manuscripts for decades. At first glance, these tales have little in common with the famously elegant mature fiction. Most of the characters in Austen’s first stories are essentially motiveless. They feast, kill, insult each other, and charge through people’s houses and across the countryside with seeming impunity, armed with a stock of blithe compliments and self-regard—and that, apparently, is enough to get away with anything.

Cassandra and Jane Austen grew up as the only sisters in a large family of boys. The stories written by the younger sister, Jane (seventh of the eight children) are filled with the trivial duplications and repetitions that arise from everyday routine. These frantic mini-novels reveal Austen using the best-selling fiction of her day to train herself in the parts and rules of novel writing. She repeatedly asks herself, and us, whether characters have to be believable in order to be compelling. Do their actions need reasons and explanations? How unhinged, inexplicable, or random is fiction permitted to be? How far can a reader be pushed?

Austen was a teenager in the same years in which Mary Wollstonecraft was associating female education with a pressing need for political reform. In her 1792 story, ‘Kitty, or the Bower’, a sixteen-year-old Jane wrote about social and sexual politics with a directness that is rarely heard in the later novels. Kitty Peterson, her young heroine, could be mistaken for Wollstonecraft herself when she exclaims passionately to her stupid, rich companion Camilla:

‘But do you call it lucky, for a Girl of Genius & Feeling to be sent in quest of a Husband to Bengal, to be married there to a Man of whose Disposition she has no opportunity of judging till her Judgement is of no use to her, who may be a Tyrant, or a Fool or both for what she knows to the Contrary. Do you call that fortunate?’

One great attraction of the early works is that—unlike the later novels—they don’t usually end in marriage. As a teenager, Austen did not feel constrained to operate within such plots, but rather envisaged many possible fates for her heroines. In these stories, women defy convention—and they sometimes win, or at least get away with it. Defiance of convention continues to shape the incongruous, satirical Jane Austen in the writings of her later years. This is the figure that I hope to restore to the limelight.