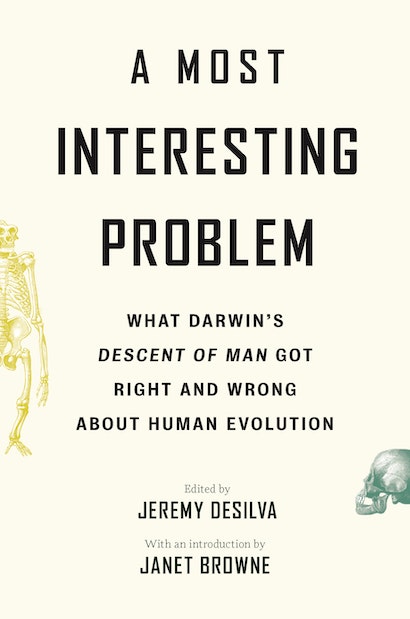 A Most Interesting Problem
Available in 3 editions
Buy This

On February 24, 1871 Charles Darwin published The Descent of Man, and Selection in Relation to Sex, a follow-up to his most famous book On the Origin of Species. In the introduction to Descent he wrote, “It has often been asserted that man’s origin can never be known: but ignorance more frequently begets confidence than does knowledge: it is those who know little, and not those who know much, who so positively assert that this or that problem will never be solved by science.”

In other words, Darwin proposed that the origin of humans was knowable.

At that time, though, Darwin didn’t know about DNA. The entirety of the human fossil record—which now numbers in the thousands of specimens—consisted of just a few Neandertal bones misidentified by many as diseased modern humans. Modern primatological studies of our great ape cousins were almost a century away.

The anniversary of the publication of The Descent of Man is an opportunity for self-reflection in our quest for understanding how humans evolved—or what Darwin called a “most interesting problem for the naturalist.” To that end, a dozen of my colleagues and I have produced a book called A Most Interesting Problem in which we review, chapter-by-chapter, what Darwin wrote in the first edition of Descent, comparing his words to what we now know a century and a half later. Contributors include: Janet Browne, Alice Roberts, Suzana Herculano-Houzel, Brian Hare, Yohannes Haile-Selassie, Kristina Killgrove, John Hawks, Agustín Fuentes, Michael Ryan, Holly Dunsworth, and Ann Gibbons.

It turns out that Darwin was remarkably prophetic in some of his predictions—for example, that the earliest human fossils would be discovered on the African continent. But he was flat out wrong in other areas. That is how science works. Even the most elegant ideas can wither in the face of new evidence. Darwin did not present infallible statements to be revered in The Descent of Man. He offered hypotheses to be tested. Some of these ideas have withstood 150 years of scrutiny. Some have not.

Darwin dared ask some of the boldest scientific questions our species has ever asked about itself: Who are we? Where did we come from? Why are we the way we are? Answering these questions, however, is not easy; data never speak for themselves. Instead, interpretations of evidence are made by people who breathe meaning into empirically derived facts and figures. And scientific hypotheses are not always self-evident. They are generated in creative minds, and tested by emotional, subjective humans behaving as objectively as they can. Science is thus a human endeavor.

Sometimes the humanity of science leads to great insights. But sometimes it leads to wrong-headed, biased interpretations. That is why science cannot be done in isolation, by a single individual. It is a collective enterprise that unfolds over generations as we test and retest old ideas and develop new ones to make sense of our world. It stagnates when it is done by homogeneous scientists with similar backgrounds and experiences. It outright fails when it is practiced by inflexible individuals clinging desperately to tired ideas. Darwin knew this. He wrote, “I had also, during many years, followed a golden rule, namely that whenever published fact, a new observation of thought came across me, which was opposed to my general results, to make a memorandum of it without fail and at once; for I had found by experience that such facts and thoughts were far more apt to escape from the memory than favourable ones.”

While many of us scientists admire Darwin, we do not worship him. He was a brilliant scholar who not only generated new data but could see how his observations were connected under big, overarching ideas with both explanatory and predictive power. He navigated seamlessly between big picture, theory-level thinking, and the small intricate details. In studying orchids, earthworms, and barnacles, he could see both the forest and the trees. But Darwin had flaws, both as a scientist and as a human. Thus, A Most Interesting Problem is not so much a celebration of Darwin as it is a tribute to how science operates, how scientific ideas are tested, and the role of evidence in helping structure narratives of human origins.

In discussions with some of the authors of the different chapters, I recommended a thought experiment in which they imagined taking a stroll with Charles Darwin himself around the Down House Sandwalk, the ‘thinking path’ Darwin would walk each day as he struggled with and developed his scientific ideas. At the entrance to the path, Darwin was known to stack stones on top of one another and gently knock them over with his walking stick as he passed.

Along this hypothetical stroll with our authors, Darwin would learn about DNA, and how this elegant molecule not only solves his blending inheritance problem but reconstructs the family tree of life into nested hierarchies predicted by descent with modification. He would learn about Australopithecus and how my science of paleoanthropology can now confidently state that upright walking and canine tooth reduction long preceded brain enlargement in the human lineage. Darwin would be confronted with irrefutable evidence that humans cannot be categorized into tidy boxes called races. The authors would enthusiastically tell Darwin about HOX genes, Neandertals, genetic drift, vitamin D, folic acid and the evolution of skin coloration.

But our authors would not shy away from confronting him with data demonstrating how incorrect he was when he wrote that men were superior to women. He would learn how his words were used to justify the eugenics movement of the 20th century. Given how intellectually curious Darwin was about the natural world, I suspect he would be thrilled at the discoveries of the last 150 years. I can only hope that he would be deeply troubled by the use and misuse of his words to justify fallacious ideas of white male superiority that shamefully continue to this day.

I can only wonder if after many trips around the thinking path, Darwin would stack more stones at the Sandwalk entrance and continue the conversation long into the night.

Jeremy DeSilva is associate professor of anthropology at Dartmouth College. He lives in Norwich, Vermont.