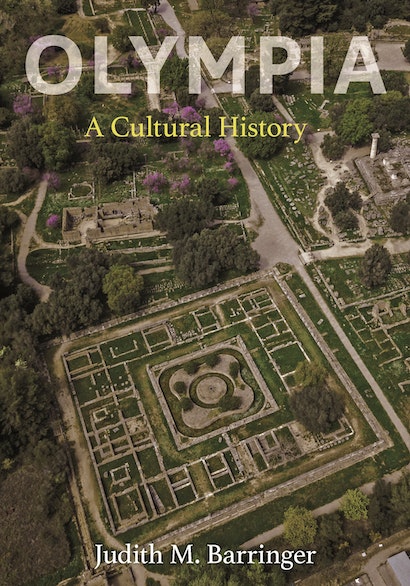 Olympia
Available in 2 editions
Buy This

﻿﻿The memory of ancient Olympia lives on in the form of the modern Olympic Games. But in the ancient era, Olympia was renowned for far more than its athletic contests. In Olympia, Judith Barringer provides a comprehensive and richly illustrated history of one of the most important sites in the ancient Greek and Roman world, where athletic competitions took place alongside—and were closely connected with—crucial religious and political activities.

Olympia is one of the chief destinations for modern tourists in Greece, who usually spend a couple of hours there learning about the Olympic Games. What else is there?

JB: Olympia is indeed the birthplace of the Olympic games, but it is so much more than that. Unlike modern athletics, ancient athletic games—not just those at Olympia—were religious in nature, organized to honor a deity—Zeus, in the case of Olympia. Thus, Olympia was a famed religious site with temples, altars to Zeus and many other deities, and monuments, frequented by thousands (perhaps 55,000) at the time of the games and its accompanying religious festival every four years, but ‘open’ all the rest of the time, as well. It was one of four sites (Delphi, Nemea, and Isthmia are the others), where the Panhellenic ‘crown games’ were held, and Olympia’s games (and victories in those games) were the most celebrated of all athletic events in the ancient Mediterranean. This meant that Olympia was a magnet not only for religious pilgrims and sports fans but also for those rulers, athletes, politicians, cities, military leaders, political federations, historians, philosophers, literati, rhetors, and so on wishing to impress, for those wishing to be seen, and for those wishing to see Olympia’s dazzling sights, including one of the Seven Wonders of the Ancient World, the colossal gold-and-ivory statue of Zeus seated in the chief temple. Many visitors, including very illustrious ones, wished to make their mark here, to leave something behind, and, in some cases, such as the Roman emperor Nero, to take things away. Statues announced political alliances; honors bestowed upon politicians, philosophers, military leaders; civic benefactions; and proclaimed and gave thanks to Zeus for athletic and military victories, as know from ancient literary evidence, parts of the statues themselves, and some 1,200 inscribed statue bases. Monuments, particularly military victory monuments, were carefully placed to respond to earlier monuments and to settle scores. Architectural sculpture was deployed to make territorial claims and tout certain values and achievements. Ancient Greece was renowned for its obsession with agon (competition), and nowhere is this clearer than at ancient Olympia.

The subtitle of the book is “A Cultural History.” What do you mean by that?

JB: The book is not a guidebook to the site, nor is it a history of the Olympic games, or an account of things that happened at Olympia or monuments that were built. Rather, the book endeavors to consider all ancient evidence—written and material—to describe how the physical site and the concept of Olympia for ancient Greeks changed over its long history. New monuments ‘interacted’ with older ones in terms of placement, theme, and function, and this ‘conversation’ shifts in tone, content, and emphasis in the course of Olympia’s long history. Because of the fragmentary nature of the evidence, one cannot know everything, but patrons’ intentions are sometimes quite clear or can be plausibly posited. One enormous component is how monuments were conceived and received in the context of Olympia; by context, I mean the events and activities that happened there, who frequented the place, what deities were worshipped there and how, and also the physical context—the placement of monuments and buildings in relationship to each other and to religious and secular structures. The book addresses this shaping and construction of memory and the effort to influence (“manipulate” may be too strong a word) perception. The Romans continued some aspects of Olympia, such as the games, but transformed the site into a ‘Roman one,’ complete with better infrastructure, the transformation of a temple to a deity into a temple for a divinized emperor, and, of course, lots and lots of statues. It is a history of the culture of Olympia and also of ancient Greek and Roman culture as revealed by the site.

How were the ancient Olympic games different (or not) from the modern Olympics?

JB: The differences are considerable. The ancient Olympics had no team sports, there was none of the nationalistic fervor that accompanies the modern games (although politics clearly played a role sometimes), athletes competed as individuals (but their home cities took great pride in their victories, and the name of the home city was announced along with the name of the winner), unmarried women were not permitted to be spectators, there were no second- or third-place honors—you either won or you lost, and the prize was not a medal but a simple crown fashioned from olive branches (hence, the term ‘crown games’). Yet Olympic victors were ‘superstars.’ In addition to honors that some towns bestowed on their victors, such as front seats in the theater, free food and board for life, and perhaps even more impressively, a lifetime exemption from taxes, Olympic victors received the most coveted ‘prize’ of all: glory, everlasting fame. This was sometimes celebrated in victory odes commissioned by the athlete or a sponsor, and the victory statue at Olympia rendered it in permanent form. Some Olympic victors became military advisors, others were rulers, and a few were ‘heroized’ after their deaths, i.e., they received monuments and religious honors befitting a hero. No contracts with Nike, but it wasn’t bad.

What happened to the site of Olympia? Was it conquered?

JB: After pagan cult practices were officially abolished in 393 AD by decree of the Christian emperor, Theodosius, it seems that the games and religious activity continued in some form until the mid-fifth century or so. By this time, a Christian community with workshops, dwellings, and a church was well-established on the site, and agricultural activity took place. While Slavs eventually settled there, Olympia was not conquered by an outside enemy but by natural events: repeated earthquakes over the centuries had already done much damage during Olympia’s heyday, but earthquakes, together with repeated flooding by the Kladeos River at the west side of the site finally buried Olympia under meters of silt. Parts of the temple of Zeus were still visible when the site was rediscovered in the eighteenth century. Excavations began in 1829, and after a hiatus, resumed in 1875. They continue to this day, and yes, new discoveries are being made all the time.

What should we take away from this book, i.e., why should we care?

JB: One goal of this book is to make the reader aware of public space and how it is constructed, reconstructed, deconstructed over time and different historical circumstances. Olympia was not a static site as one might experience it today, where buildings from many different periods appear as if they all stood simultaneously. Instead, its appearance and cultural meaning underwent many changes over its long history: monuments and buildings were physically moved, destroyed, renovated, melted down or otherwise refashioned and rededicated, and these changes were driven by historical, cultural, political, and religious shifts. The current debate about Confederate monuments (both free-standing monuments and places named after Confederate figures) and monuments honoring slave owners is an excellent example of this deconstruction, and in some cases, planned reconstruction of space, of memory, of history, and, of course, of the honorific monument. How do we differentiate commemoration from commendation, how have cultural values shifted, and, of course, what will future generations make of all this? What should be done with the vacant locations or appellations, and, of course, what should be done with all the monuments plucked from their original locations? Should they be exhibited and treated as an educational exercise, should they be destroyed, or repurposed, i.e., melted down and recast as a new monument? What values or ideas should prevail, and, of course, who should decide? All of these questions are ones that ancient Greeks considered as they built, reshaped, reconfigured, and reimagined ancient Olympia.