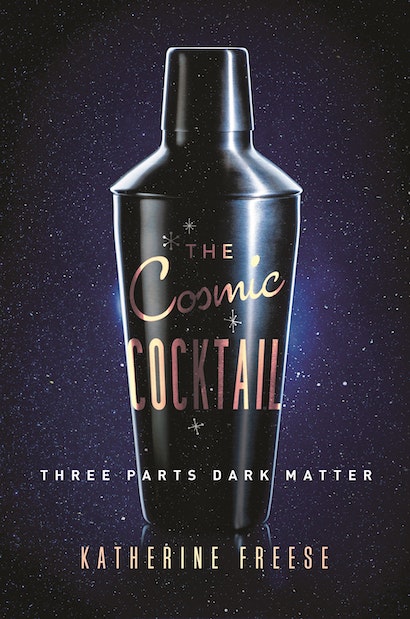 The Cosmic Cocktail
Available in 2 editions
Buy This

Katherine Freese is director of Nordita, the Nordic Institute for Theoretical Physics, in Stockholm, and author of The Cosmic Cocktail, which tells of the epic quest to solve one of the most compelling enigmas of modern science—what is the universe made of? This is the story of how one of today’s foremost pioneers in the study of dark matter came back from the brink of burnout because of Relativity.

My career choice was hugely influenced by the work of Albert Einstein. I chose a career in physics precisely because I was inspired by his theories of relativity. My first exposure to physics was at Exeter Summer School in New Hampshire when I was fifteen years old. I went there after my junior year in high school because, frankly, I enjoyed learning and would otherwise have been bored over the long summer.

I took an introductory course in physics and have to admit that, at first, I was a bit intimidated. But I got into it quickly and was gratified to discover that I did really well. The course was inspiring, and my teacher Mr. Dudley probably has no idea what an impact he had on me. It was when the summer course turned to Special Relativity that I became really excited. What a bizarre and fascinating subject! To begin with, the idea that there is no absolute reference frame was an eye-opener. I later tried to explain this to friends, but they persisted in arguing that the Earth really does provide a special reference frame, at least for humans, so we should just compute everything from our own point of view.

Strange paradoxes arise when one makes one simple postulate, that the speed of light is the same in every reference frame. Two observers moving with relativistic speeds (relative to one another) measure completely different things. Clocks measure different times, and rulers measure different lengths. The shortest time is measured in the reference frame where the event takes place, and in every other frame time appears dilated. So an astronaut, who goes off into space and eventually returns, ages more slowly than the rest of us. There can be time travel! In the sense that the astronaut can come back to the Earth at an arbitrarily distant point in the future…if she can tolerate traveling at those speeds.

Recently I met quite a few astronauts in Stockholm at the Congress of the Association of Space Explorers. They are amazing people. I was invited to give a talk on “What we know about the Universe today.” A tall order in front of these folks. Can you guess what I talked about? Cosmology, beginning with Einstein’s relativity, of course. These exciting things I learned when I was 15 made me determined to learn more physics, and I ended up majoring in physics in college. I went very young, at 16, and graduated with a bachelor’s degree in physics from Princeton University at the age of 20. It was really hard, I was burning out quickly, and at that point I wasn’t sure I wanted to continue.

Chapter One of The Cosmic Cocktail, the book that was published by Princeton University Press just over a year ago, describes what happened next. I decided to take some time off from school. With my best friend, I went off to Tokyo to teach English and ended up serving drinks in bars for a giant salary. (I finally surpassed it a few years ago as a Full Professor.) A year and a half later, I went to Korea to renew my visa. While I was traveling around Pusang, my stomach, or so I thought, started to hurt. When I returned to Tokyo I was walking around doubled over with pain. Indeed it turned out to be appendicitis. I went to the Catholic Hospital, run by English nuns, and had my appendix removed. While I was lying in the hospital bed, I read the only book I had brought with me, Spacetime Physics by Taylor and Wheeler. It is a book about Einstein’s special relativity. The book is beautifully written and only requires simple knowledge of forces, energy, and so on, and I loved it. The minute I got out of the hospital, I flew back to the US, reinvigorated by the desire to study physics. I contacted Columbia University, which had previously accepted me, and they let me in at a moment’s notice. I was lucky they did. Einstein’s influence persisted.

Two years into my graduate program at Columbia University, I went to Fermilab, the particle physics accelerator outside of Chicago, to work in experimental high energy physics. However, I also took a class in cosmology at the University of Chicago twice a week, out of curiosity. Plus, it took me into the city of Chicago. Fermilab is on a farm an hour west and has buffalo roaming around. The professor who taught the course, David Schramm, was a giant both physically and mentally, and one of the founders of the field of astroparticle physics, where the smallest particles explain the properties of the largest galaxies. We nicknamed him “Schrammbo.” (If you want to know more about him, you’ll have to read my book.) In that course, Einstein’s equations were applied to the Universe as a whole. Wow. I stopped showing up in the lab and instead sat in my housing at Fermilab and read about general relativity, this time at a graduate level framed by far deeper mathematics. Again, it was a turning point. I transferred to the University of Chicago to get my PhD with David Schramm in the field of cosmology. In human history, every culture has had creation myths. In the past 100 years we have developed our own, the Big Bang. The difference is that the Hot Big Bang is right!

The achievements over the past century in the field of cosmology are breakthroughs for all of mankind. We understand everything about our observable Universe all the way out to the farthest distant that light could have traveled to us in the age of the Universe (anything farther out could not have impacted us because the information could not travel in excess of the speed of light). Now I’m a professional. I work with Einstein’s equations or their immediate consequences every day. I’m a theorist. I invent things and hope they turn out to match reality. All my work lies within the framework of modern cosmology, which began with Einstein’s work in relativity in 1915. What a brilliant man he was! Ever since I learned about relativity I’ve been under its spell, and I still am.

Katherine Freese is director of Nordita, the Nordic Institute for Theoretical Physics, in Stockholm, and professor of physics at the University of Michigan. She is the author of The Cosmic Cocktail.