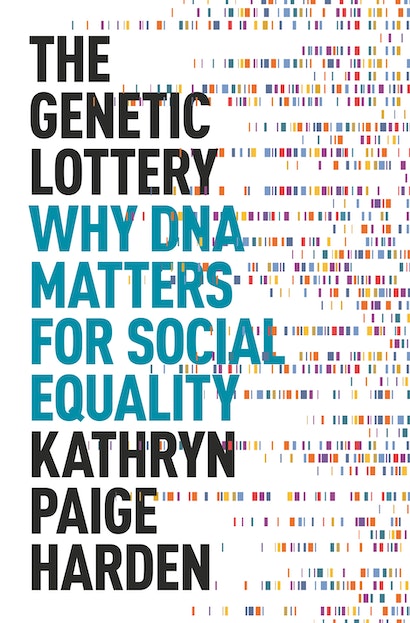 The Genetic Lottery
Available in 4 editions
Buy This

In recent years, scientists like Kathryn Paige Harden have shown that DNA makes us different, in our personalities and in our health—and in ways that matter for educational and economic success in our current society. In The Genetic Lottery, Harden introduces readers to the latest genetic science, dismantling dangerous ideas about racial superiority and challenging us to grapple with what equality really means in a world where people are born different. Weaving together personal stories with scientific evidence, Harden shows why our refusal to recognize the power of DNA perpetuates the myth of meritocracy, and argues that we must acknowledge the role of genetic luck if we are ever to create a fair society.

Can you explain the metaphor of the “genetic lottery”?

KPH: Everyone has two copies of all of their genes, but a parent only passes down one copy of each gene to their child. This means that a child’s genetic sequence is like the outcome of a Powerball lottery: there are trillions of possible combinations that any pair of parents could create. In this way, DNA is a form of luck in our lives. Our unique genetic sequence is something that came to be because of random processes over which we had no control.

How do you and other scientists study the impact of the genetic lottery on human lives?

KPH: Until recently, we couldn’t look at DNA directly, so we relied on more indirect methods, like the twin study or the adoption study. These study designs hinge on the question of whether people who are more genetically similar to one another (like identical versus fraternal twins) are also more similar in their psychology. Now, however, we can measure people’s DNA cheaply and noninvasively. As I describe in the book, I am particularly interested in studies that test how family members—brothers and sisters, parents and children—differ from one another in their DNA sequence and how those genetic differences are related to differences in their life trajectories. What we see across a variety of genetic research methods is that our genes influence nearly every aspect of our thoughts, feelings, and behaviors—including behaviors that are financially rewarded, like doing well in school. At the same time, genetic studies are also very powerful for identifying environmental influences on human development. By measuring nature, we can see the effects of nurture more clearly.

Many readers who are familiar with the history of eugenics in America and Europe will be wary of efforts to connect genetics with social inequalities. How does your book address these concerns?

KPH: These are valid concerns that the book takes very seriously. And, it’s not just history that might give readers pause; genetic research continues to be misappropriated by white supremacist communities even today. There are three points I make in the book that are important for disentangling genetics from eugenics. First, neither race nor social class is a genetic concept: None of the science I describe supports the idea of innate or immutable racial or class differences. Second, the idea that genetics “naturalizes” social inequalities as fixed and unchangeable is a scientifically inaccurate fiction deliberately propagated by political extremists. We do not need to accept that framework anymore. Finally, it’s important to remember that our moral and political commitments to human equality do not depend on humans all being genetically the same. To quote the mid-century evolutionary biologist Theodosius Dobzhansky, “genetic diversity is mankind’s most precious resource, not a regrettable deviation from an ideal state of monotonous sameness.”

You’re a psychologist, but the book also incorporates ideas from economics, sociology, population genetics, and philosophy. How did you approach researching and writing such a cross-disciplinary book?

KPH: There was no way to write this book without being cross-disciplinary. How do genes influence the lives of humans who are living in a particular society at a particular moment in history? What does it mean for a society to be fair or unfair when people are born different? Those are big questions that transcend any one academic discipline. In addition to reading widely, I’ve also been fortunate to forge relationships with scholars across the sciences and the humanities, who have helped me bring the big ideas of their disciplines into this book.

What do you hope that readers will take away from reading your book?

KPH: I hope that readers will take away three things from reading my book. First, for readers who are scientists themselves, I hope to encourage them to conduct more cross-disciplinary research that incorporates genetics. We have amazing new scientific tools that allow us to measure a child’s DNA. Research that takes advantage of these new tools is our best bet for developing environmental interventions that help every child succeed in school to their maximum potential. Second, for the general reader, I hope to dispel some popular myths about genetics. Too often, people think of genes as deterministic, and of the study of genetics as an enemy to social change through social policy. In reality, genetics is a tool for understanding ourselves and the world around us, and greater understanding leads to greater possibilities for change. Finally, I hope all readers walk away with a deeper appreciation for the role of genetic luck in their own lives. For me, realizing how much of my life has been shaped by random chance has helped me cultivate greater compassion for myself and for other people.

Kathryn Paige Harden is professor of clinical psychology at the University of Texas at Austin, where she is director of the Developmental Behavior Genetics Lab and codirector of the Texas Twin Project. She lives in Austin. Twitter @kph3k