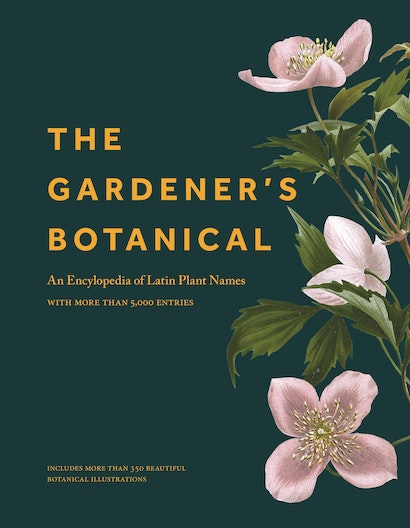 The Gardener's Botanical
Available in 2 editions
Buy This

Homo sapiens. That’s us. In the grand scheme of classification, we humans warrant only this mini Latin moniker. Consider Johannesteijsmannia magnifica, a Malaysian palm, or Notholithocarpus densiflorus forma attenuato-dentatus, the California cut-leaf tanoak, and perhaps you might think we humans have been short-changed. Surely, as creators of this system, we deserve a more magnificent appellation? But Homo sapiens means ‘wise man’ so we can afford to be humble. Humans have named and classified the living things around us for many centuries and the system we use today has been generations in the making. The Latin name of a plant is not just a label, but is loaded with information, providing you can translate it.

So why do plants have Latin names? Firstly, they need a name that transcends national boundaries. Scientists, conservationists, governments and many other stakeholders use the Latin name in order to communicate internationally about a specific plant. Latin was chosen in part because it is not widely spoken in any modern state, so no country could claim favoritism. Furthermore, universities operating in the 18th Century and earlier taught their students entirely in Latin and those academics who began the process of classification were generally fluent. Classification also serves a scientific purpose in that it demonstrates evolutionary relationships. For example, many plants contain compounds with useful medicinal properties; a biochemist searching for novel medicines will first investigate plants closely related to those providing existing drugs. That’s only possible when we understand plant relationships.

As you might expect from scientists, plant Latin names are not random, but obey specific rules. Each species is allocated a two-part Latin name, the first part being the genus (or generic name) while the second part is the species name (or specific epithet). These names work a little like human names; the genus name is often shared with several other related species, as in human family or surnames. The species name is unique to that species, like human forenames, and identifies the individual within the wider genus. Hydrangea is a genus of around 70 species, including Hydrangea macrophylla (big-leaf hydrangea) and Hydrangea quercifolia (oak-leaf hydrangea). As both bear the genus name Hydrangea, we know that these two plants are related to one another, but the different specific names tell us that these are two different species. As gardeners, understanding these relationships can really help when providing care, as many related plants have similar needs when it comes to pruning, pest control and propagation.

Plant Latin names are assigned by scientists and, while they must fit the genus + species configuration, there is great freedom in choosing the actual name. The most common format is simply to describe the plant in Latin, as in Hydrangea macrophylla, or water (hydor) vessel (angeion) big (macro) leaf (phylla). Hydrangea fruits are the same shape as a classical water vessel and this species has particularly large foliage. Descriptive names can reveal useful information to the gardener. Armeria maritima (thrift) grows by the sea, so will tolerate salt spray, while Geum rivale (water-avens) thrives in moist soil along rivers. Toxicodendron radicans (poison ivy) should not be touched and Toxicoscordion venenosum (death camas) should never be eaten. Helianthus annuus (sunflower) is annual, so only lives for one growing season, while Bellis perennis (daisy) is perennial, and resprouts each spring.

Beyond the merely descriptive, plant Latin names reveal tales of valour, fascinating historical facts and the quirky sense of humor of some botanists. Naming plants after people has long been a popular way of honouring the great and good, whether it’s a water lily named after a queen (Victoria amazonica) or a palm named for a founding father (Washingtonia filifera). Some such plant names become so well known, that we forget the person they commemorate, as in Camellia (Georg Kamel), Fuchsia (Leonhart Fuchs) and Magnolia (Pierre Magnol). The tobacco plant (Nicotiana tabacum) venerates 16th Century French diplomat Jean Nicot, but today the name is associated with nicotine and its derivatives, the neo-nicotinoids, which still poison humans and insects alike. The Scottish botanist Munro Briggs Scott also has a plant named in his honor (Briggsia); he was killed during the First World War, at the tender age of 27. On a lighter note, some Latin names have more quirky origins. The cactus Lobivia hails from Bolivia (they’re anagrams), while Mitella and Tellima are sister genera. Understanding Latin names will help any gardener care for their plants, but the curious tales concealed within these tricky-to-pronounce titles will entertain any lover of natural history, whether green-thumbed or not.

Ross Bayton is a horticulturalist and freelance editor. His books include RHS Genealogy for Gardeners: Plant Families Explained and Explored, RHS Gardening School: Everything You Need to Know to Garden Like a Professional, and RHS Colour Companion: A Visual Dictionary of Colour for Gardeners.