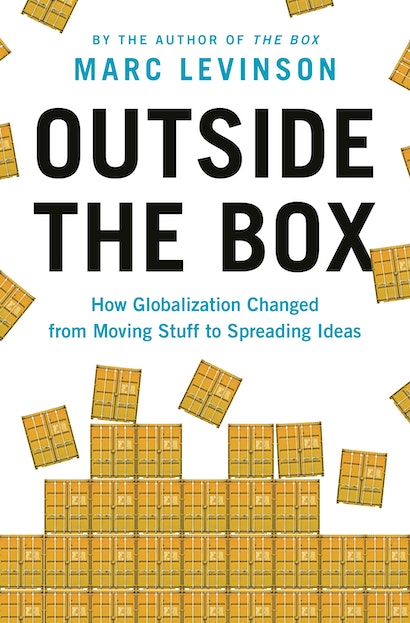 Outside the Box
Available in 3 editions
Buy This

Globalization has profoundly shaped the world we live in, yet its rise was neither inevitable nor planned. It is also one of the most contentious issues of our time. While it may have made goods less expensive, it has also sent massive flows of money across borders and shaken the global balance of power. Outside the Box offers a fresh and lively history of globalization, showing how it has evolved over two centuries in response to changes in demography, technology, and consumer tastes.

Why did you write Outside the Box?

ML: Wherever we turn these days, we hear glib talk about globalization. At one extreme, there are Pollyannish claims that globalization has been going on since the days of the pharaohs and is nothing to worry about. At the other extreme, at almost all points on the political spectrum you’ll find those who make globalization the scapegoat for whatever ills they see, from Ralph Nader to Donald Trump to the French politician Marine Le Pen, who depicts an apocalyptic battle of “the patriots against the globalists.” Much of the writing about globalization advocates one view or the other. In Outside the Box, I step outside this tedious debate to present an unusual history of globalization. I’ve tried to make it short, lively, and fun to read, and to help readers think about globalization in a different way.

Does globalization have a specific meaning?

ML: Long-distance trade and migration have occurred for millennia, but I argue that globalization began only in the second quarter of the nineteenth century. I point to two factors that distinguish the globalizing world economy. First, the idea took root that international economic exchange is not a winner-take-all game, but that all countries can benefit. This was a dramatic shift from earlier thinking. The second factor was that a large share of the population in many different countries participated in the world economy as consumers, workers, and investors, quite unlike earlier centuries when, in most places, the world economy hardly mattered to most people. After disruptions from World War One, the Great Depression, and World War Two, a second phase of globalization took root in the late 1940s as governments lowered barriers to international trade and investment. What we now think of globalization is a third stage, beginning in the late 1980s as falling transport, communication, and computing costs led manufacturers and retailers to create long-distance value chains. I assert that this stage of globalization was already waning by the early 2010s, well before Brexit, the Trump presidency, and COVID-19.

Has this third stage of globalization been good for the world?

ML: It’s an article of faith among economists that international trade and investment are desirable. Just about everyone is familiar with the standard claim that opening borders to trade and investment benefits consumers and leads to a more efficient allocation of resources, stimulating economic growth. I think globalization has brought enormous benefits, lifting billions of people out of dire poverty over a very brief period of time, but that globalization taken to excess has caused considerable harm as well. One thing that’s important to understand about globalization as we’ve known it since the 1980s is that the creation of global value chains has been heavily subsidized. Cross-border lending has been subsidized. Shipping has been subsidized. Manufacturing facilities have been subsidized. Lax environmental regulation is effectively a subsidy. Multinational corporations have been subsidized by being allowed to shift their income to low-tax countries. Subsidies made globalization of value chains artificially cheap, and as a result we have ended up with more globalization than is economically desirable.

Why do you say the globalization of value chains is waning?

ML: Many firms shifted manufacturing to low-wage countries to take advantage of low production and distribution costs, without accounting for risk. Yet we’ve seen repeatedly that the risks of complicated value chains can be significant. Earthquakes, labor disputes, epidemics, fires, and many other unanticipated events can result in goods not being delivered on time. When that risk is properly assessed, manufacturing halfway around the world may not be quite such a bargain. Also, labor costs are becoming less important in manufacturing, so it makes sense to produce many things closer to where they will be sold rather than where production wages are lowest.

Does this mean globalization is over?

ML: Far from it. Instead, globalization is again changing its shape. Consumer spending has shifted rapidly from goods to services, and this shift will accelerate in many countries as populations age. The biggest import coming through the Port of Los Angeles is furniture. Older people don’t buy as much furniture as younger people. The second-biggest import coming through LA is auto parts. Electric vehicles, which are starting to become cost-competitive, require significantly fewer parts than internal combustion vehicles, so we won’t need as many containers of auto parts. Trade in goods, which grew two or three times as fast as the world economy for several decades, is now growing more slowly than the world economy and I expect that to continue. In the coming years, globalization will have more to do with trade in services and ideas and less to do with moving metal boxes stuffed with merchandise across the oceans.

Marc Levinson is the author of several books, including The Box: How the Shipping Container Made the World Smaller and the World Economy Bigger (Princeton) and The Great A&P and the Struggle for Small Business in America. He was formerly finance and economics editor at The Economist and a senior fellow at the Council on Foreign Relations. He lives in Washington, DC.