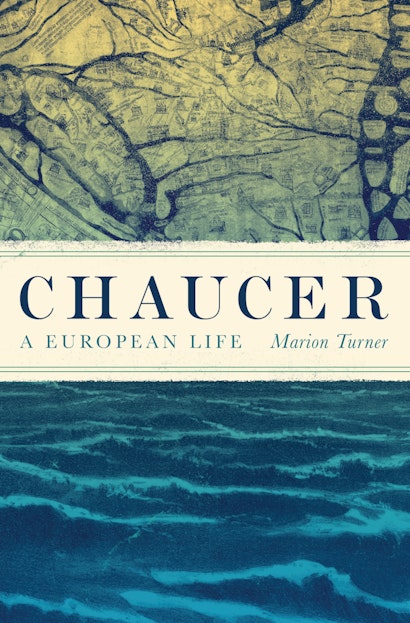 More than any other canonical English writer, Geoffrey Chaucer lived and worked at the centre of political life—yet his poems are anything but conventional. Edgy, complicated, and often dark, they reflect a conflicted world, and their astonishing diversity and innovative language earned Chaucer renown as the father of English literature. Marion Turner, however, reveals him as a great European writer and thinker. To understand his accomplishment, she reconstructs in unprecedented detail the cosmopolitan world of Chaucer’s adventurous life, focusing on the places and spaces that fired his imagination.

What compelled you to write a biography about Chaucer that focuses on place rather than chronological events in his life?

MT: I was trying to find a way to get under his skin. Although we have an extraordinary amount of information about Chaucer—mainly because he was a government servant, and records were meticulously kept—we don’t have personal letters, diaries, recollections, the kind of material biographers of more recent subjects can access. But I realised that I could get into his head—his imagination—by focusing on his environment: the art he saw, the streets he travelled, the kinds of buildings and structures he lived in. He had an extraordinarily adventurous life—travelling to multicultural communities in the Iberian peninsular, being taken prisoner and ransomed in the Hundred Years War, travelling at least twice to Italy, picking up manuscripts on the way, seeing slave markets in Genoa and the art of Giotto in Florence. Some of my chapters focus on actual places, such as Navarre, Vintry Ward in London, or Reims; others on more conceptual spaces such as Peripheries, Thresholds, and the Cage; and others on institutions such as the Inn, the Great Household, and the Abbey. For me, this structure enabled me to get inside Chaucer’s world, to think, for instance, about what it was like to live in a much more public way than we do now. And this structure also allowed me to follow particular themes and threads more organically than a strictly chronological structure would. At the same time, I am interested in the development of his imagination across time—in how he became the poet of the Canterbury Tales—so I did maintain a rough chronology, with the book divided into three parts that each span a phase of his life. One wonderful thing is that many of the places that mattered in Chaucer’s life can still be viewed today—the walls and Tower of London, for instance, or the medieval town of Olite in Navarre. I found tracing his footsteps to be profoundly important as I researched the book.

Why was writing a narrative poem in English so revolutionary in the 14th century? What was particularly challenging about that task, from a linguistic and stylistic standpoint?

MT: People had been writing long poems in English before Chaucer, and indeed there is an unbroken tradition of poetry in English going back to Beowulf and even earlier. But it wasn’t a prestigious language in Chaucer’s day—the prestigious languages were French and Latin, and English was very much the poor relation. Then things started to change, and Chaucer was at the forefront of that change. In the second half of the fourteenth century, Chaucer was part of an upsurge in the production of texts in English—other poets, such as Gower, Langland and the anonymous author of Sir Gawain and the Green Knight were also writing in English, religious writers including the female author Julian of Norwich were beginning to write texts, and English was increasingly used in government—for instance in the law courts. Chaucer was an innovator in what he did with English. At this time, court poets were writing in French, and it was completely new to write a courtly love poem—these were called ditz amoureux—in English. When Chaucer wrote his first long poem, the Book of the Duchess, it was very much in the style of French poets, such as Machaut and Froissart. Chaucer then went into a kind of experimental frenzy—he developed all kinds of new verse forms, and really pushed the boundaries of what English poetry could do. Most notably, he invented the iambic pentameter—the ten syllable, five stress line that became the building block of English poetry, and was used by later poets such as Shakespeare. Chaucer had to borrow a lot of words from other languages, and invent new words, to expand what English could do. He even complains in one short poem about the scarcity of words in English. Indeed, he was so newfangled that he invented the word newfangled!

Clearly, Geoffrey Chaucer is one of the most important figures in the English literary canon because of his myriad contributions to the language and the poetic form. Is there anything that readers might find surprising?

MT: So many things. The idea of Chaucer as father of English literature came about after his death, in the fifteenth century, and has gathered momentum ever since then. But in many ways, it really misrepresents him, and makes people think of him as a rather establishment, patriarchal, national figure. One of the things that I want to get across in this book is that he was a great European figure—and that for Chaucer the idea that being English somehow meant not being European would have been crazy. His choice to write in English was very much inspired by what Italian poets (such as Dante and Boccaccio) had been doing—he was part of an international trend to focus on more accessible vernaculars, rather than prestigious, exclusive languages. His life was outward-facing—he travelled a great deal, was multilingual, and in London was living at the heart of global trade networks. You could buy spices from Indonesia in London in the fourteenth century, and Chaucer’s childhood ward had more immigrants living there than any other London ward. And much of Chaucer’s writing is indeed focused on the importance of allowing different kinds of people to read and to tell stories. In contrast to his sources, when Chaucer wrote a tale-collection he ostentatiously made sure that the tellers were from myriad social groups, and refused to allow principles of hierarchy to dictate the order of the tales. Another great example is his dream poem, the House of Fame, a poem which attacks the idea of the canon, and emphasises that a poet or storyteller can’t only rely on old books—they have to go to the streets, listen to their neighbours’ gossip, find inspiration in life as well as libraries. Literature, for Chaucer, was dynamic and living, and that is one reason why it has survived so well and continues to inspire so many contemporary poets to make their own creations. He’d have loved that!

A particularly disturbing anecdote from the book reveals that Chaucer was very likely accused of raptus, or rape, though this is hotly contested by literary critics who hold that his treatment of female characters made him more sympathetic towards women in general. What does this shred of evidence mean for us as readers, when we’re forced to grapple with the overlap between an important writer’s public and private lives, or between their works of fiction and their reality?

MT: That’s such a difficult question, and it has many parts to it. I suppose the key question here is what is the relationship between life and works? It seems to me to be very dangerous to assume that because someone shows sympathy to women in their writings, or music, or films, they could not also be personally violent towards them. Whatever Chaucer, or Marlowe, or Ezra Pound did or thought does not, ultimately, affect my judgement of their art. And if we only read works written by people of whose opinions and actions we approved, we’ll certainly be intellectually impoverished. I do think there is a difference if we are talking about people such as Roman Polanski, or Michael Jackson, whose victims are still alive today—a difference in terms of our sensitivity towards and respect for those people. A separate question is whether Chaucer was indeed guilty of this accusation—and that remains an open question, which scholars are still debating, and which I do talk more about in the book. I’m also interested in many aspects of his relationships with women in this biography—in particular his daughter, whom no one has written about before, and his first employer, Elizabeth de Burgh, who dressed him in scandalously tight trousers when he was a teenage page.

What do you hope that readers take away from Chaucer?

MT: One of the mantras of the Canterbury Tales is ‘diverse men, diversely they said.’ In other words, different people have different opinions. Chaucer himself is profoundly interested in perspective, in the idea that what you see depends on where you are standing—both literally and metaphorically, That’s something that contemporary scientists and artists were interested in too, as men such as Oresme debated about the rotation of the earth, for instance. In the Tales, Chaucer shows us that the same tale can be told in contrasting ways by different tellers; that readers or listeners will interpret stories in varying ways; and that no one interpretation is final or authoritative. I hope that readers will be caught by surprise and interest when they read about the global medieval world, or about Chaucer’s preoccupation with imagining astral flight, or about Chaucer’s role looking after the king’s falcons, or about what it was like to be imprisoned in 1359, or about Chaucer’s journeys amongst Jewish and Muslims communities, to give a few examples. But mainly I hope that each reader finds something that fascinates them, something that maybe challenges a previously-held assumption or belief—but what that is might be different for each reader.

Marion Turner is associate professor of English at Jesus College, University of Oxford.

This piece was originally published on April 9, 2018.