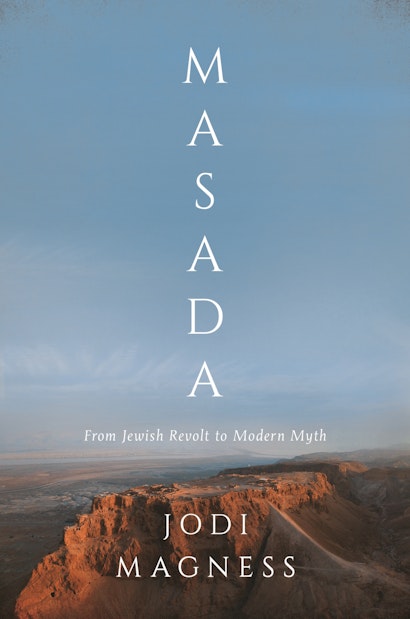 Two thousand years ago, 967 Jewish men, women, and children reportedly chose to take their own lives rather than suffer enslavement or death at the hands of the Roman army. They were the last holdouts of the First Jewish Revolt against Rome, which had ended officially three years earlier, in 70 CE, with an unimaginable disaster: the destruction of Jerusalem and the Second Temple. During the revolt, these families found refuge atop Masada, a remote mountain overlooking the Dead Sea that had been fortified by King Herod the Great seventy years earlier. Now, however, they were besieged by an overwhelming Roman force, and it was clear the fortress would fall. At this critical moment, the rebel leader Eleazar Ben-Yair gathered the men together and convinced them to commit mass suicide. So persuaded, each man killed his own wife and children. Then the men gathered together and drew lots, determining which ten of them would put the others to death. The ten remaining men drew lots again, and one man killed the other nine before taking his own life, as the ancient Jewish historian Flavius Josephus describes:

“Finally, then, the nine bared their throats, and the last solitary survivor, after surveying the prostrate multitude, to see whether haply amid the shambles there were yet one left who needed his hand, and finding that all were slain, set the palace ablaze, and then collecting his strength drove his sword clean through his body and fell beside his family.”
(War 7.397-398; Loeb translation)

Nowadays most visitors to Masada come from Jerusalem via a highway along the western shore of the Dead Sea, arriving on the mountain’s east side. Others make the trip from the west, by way of the town of Arad and arriving at the Roman ramp. In the summer months, thousands of youth from abroad form a continuous line climbing the mountain before sunrise by way of the Snake Path. After the sun comes up, many more tourists pack the cable car for a ride to the top. All these visitors share one goal: to stand on the very spot where a small band of Jewish rebels made their last stand against the mighty Roman Empire.

Josephus’ account of the mass suicide at Masada is so compelling that after Israel was established in 1948, the slogan “Masada shall not fall again” became symbolic of the modern state. The example of Jews putting up a heroic resistance to the death instead of going meekly to their slaughter had great appeal in the wake of the Holocaust and at a time when Israel’s population felt embattled. However, times have changed, and with them, so have perspectives on Masada. For one thing, even those who embrace the mass suicide as a symbol of modern Israel must reconcile it with Judaism’s prohibition against taking one’s own life (although according to Josephus’ account, only the last man died by his own hand). More importantly, in today’s post-Zionist era the story of Masada has become a less compelling model for Israelis. And scholarly views have changed as well. For example, many scholars now believe Josephus’ description of the mass suicide (the only ancient account of this episode) is fabricated—that it never happened!

One of the “myths” surrounding Masada that I explore in my book, Masada: From Jewish Revolt to Modern Myth (Princeton University Press, 2019), concerns whether the mass suicide really happened. As I explain, this is a question that archaeology is not equipped to answer. For example, nowadays visitors to Masada are shown the spot where the “lots” were found, in a space to the west of the large bathhouse in the northern palace complex. This area displayed signs of a violent conflagration, and more than 250 ostraca (inscribed potsherds) were found dumped here, some inscribed with names which might be connected to the distribution of food among the rebels. The famous Israeli archaeologist Yigael Yadin, who excavated Masada from 1963–1965 and was also chief-of-staff of the Israel Defense Forces (IDF), identified twelve of the ostraca as lots because they were written by the same hand and are inscribed with Hebrew names, including “ben Yair.” However, Joseph Naveh, who published these ostraca, was unable to identify them conclusively as the lots mentioned by Josephus. One problem is that there are twelve ostraca in the group, not ten. Yadin argued that one ostracon had never been completed, which leaves eleven ostraca. He therefore suggested that Josephus did not include Eleazar ben Yair among the final ten men who drew lots, based on the assumption that the ostracon inscribed ben Yair refers to the rebel leader. Another problem noted by Naveh is that the lots resemble ostraca inscribed with names found elsewhere around Masada. Therefore, whether these ostraca are lots or were used for other purposes remains an open question. The ostraca and other archaeological remains can be interpreted differently as either supporting or disproving Josephus’ account. Whether or not the mass suicide story is true depends on how one evaluates Josephus’ reliability as an historian.

A second “myth” concerns Masada’s iconic status: how did the site of a reported mass suicide of a band of Jewish rebels who terrorized other Jews become a symbol of the modern State of Israel? These rebels included the sicarii, who, by the winter of 67/68 C.E., were using Masada as a base for raiding nearby settlements including Ein Gedi, where they massacred upwards of seven hundred villagers during the Passover festival (Josephus, War 4.399-405). The creation of the Masada myth—in which these Jewish rebels are transformed into freedom fighters and the mass suicide becomes a heroic last stand—has been explored by a number of scholars. While archaeology has been used in many countries to advance political or nationalistic agendas, Masada perhaps best exemplifies this phenomenon. Although Masada’s eventual fame is largely a result of Yadin’s excavations, the site had become a symbol of the modern State of Israel long before the 1960s thanks to the Israeli archaeologist Shmaryahu Gutman. Beginning in the 1930s, Gutman organized treks to Masada for youth movements which established the site as an emblem of Zionist aspirations. With the creation of Israel in 1948, Masada became a symbol of the new state.

After Yadin’s excavations, the archaeological remains underwent restoration and Masada became a national park. Masada’s image as a symbol of Jewish heroism, the Zionist enterprise, and the State of Israel was elevated through its connection to Yadin, who promoted this association in various ways. In 2001 Masada became Israel’s first UNESCO World Heritage site, and it remains the second-most visited archaeological site in Israel. Although Masada has lost much of its relevance to Israelis as a national symbol, it still resonates with Diaspora Jews who make the pilgrimage to the top of the mountain, where their guides relate the story of a small band of freedom fighters who made a heroic last stand against Rome.