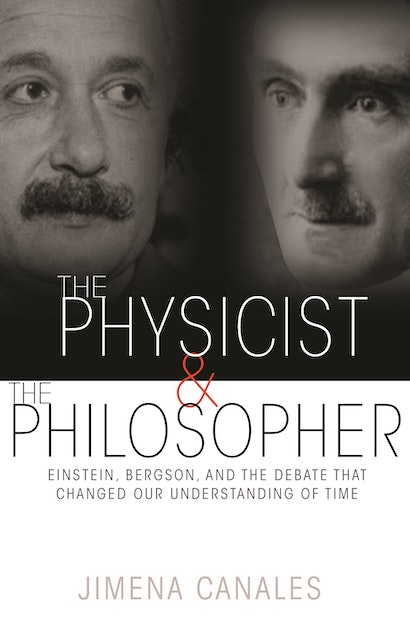 The Physicist and the Philosopher
Available in 2 editions
Buy This

Jimena Canales is the author of The Physicist and the Philosopher, which tells the remarkable story of how an explosive debate between two intellectual giants transformed our understanding of time and drove a rift between science and the humanities that persists today. This is the story of how she came to study the iconic physicist when she initially had no interest in “such a great man, or any great men.”

I arrived at Einstein after following a winding, circuitous road. Like so many others, I was acquainted with his life and works since my college years. I majored in Engineering Physics, taking the required relativity lessons as part of my Modern Physics courses. Like so many others, I struggled to understand the philosophical significance of the theory’s paradoxes (particularly those pertaining to simultaneity and time and length dilation). Comprehending that was a lot harder than the comparatively simple number-crunching that led me to the right answers in the final exam. But as a historian of science, I was initially not interested in such a great man or in any great men, for that matter. In fact, early on in my career I was more interested in understanding broader social and historical transformations than those that could ever be brought about by single individuals, no matter how brilliant they were. No one person created modernity, and I was interested in understanding how it came about. Yet once I came to know Einstein, my career and my views about the history of science changed dramatically.

It all started when I found the transcript of a meeting at the Société française de philosophie that took place in April 6, 1922. I had been looking for that particular document because I was trying to find out everything I could about Henri Bergson, one of the most important philosophers of the century widely renowned for his insightful views about time. Bergson’s conception of time had been more famous than Einstein’s — it was only natural that I would focus on him. But what I found out upon reading the transcript shocked me beyond belief. I read about Henri Bergson debating, face-to-face, with Albert Einstein himself. I tried to read as much as I could about this day, and—surprisingly—found almost nothing in the existing Einstein scholarship. But it seemed to me that everywhere else I looked I found references to that particular meeting. What is more, I found an astounding number of prominent intellectuals and scientists all discussing Einstein and Bergson together, and asking which of the two men was correct when it came to the prickly question of time. Given my interest in Bergson, I was invariably led to study Einstein. I had thought that everything interesting about Einstein must have already been worked on to death by historians. I thought I would have nothing new to contribute. But the Einstein I was starting to get to know was quite different from the one I had read about. I was at first a reluctant Einstein scholar, but as I read more and more I was hooked. My encounter with his work affected me in the most unexpected and wonderful ways imaginable. I was reminded how in even the most treaded upon topics there remain elements of surprise.

Truth be told, the Einstein I got to know through my sources was not the mythical figure we all know—he is of this world. In my book, we find him saving a small piece of soap to give to his wife because he cannot afford to buy it; we find him desperately trying to combat the objections of Bergson to defend his theory; we see him speaking on the radio and reenacting for television some of the most important moments of his life; and, finally, we encounter him reflecting about Bergson in melancholic and personal letters written to his best friend in the years before his death. By reading his private correspondence, I got to know his sense of humor as much as his callousness; his sectarianism as much as his noble internationalist ideals; his pacifism as much as his uncompromising politics (I was surprised, for example, to see him take such a strong stance against the League of Nations). I was able to see his brilliance as well as his limitations (in almost everything that involved knowing the language and culture of France). Einstein slowly appeared to me as much more than a great man—he became an ideal figure through which we could explore broader questions, such as the division between the science and the humanities, the role of expert knowledge versus lay wisdom, the relation of science to the media and to other areas of culture (including art). We could learn how cosmological and universal conceptions of time (in theory) are related to our use of time (in practice). We could explore processes that lead to the formation of our own subjectivities and psychological make-up and, most importantly, analyze our ever-changing place amongst things, machines and new technologies. Years after my first scholarly encounter with Einstein, I cannot but be more than grateful to that great physicist, who a century after creating his General Theory of Relativity, continues to teach us so much.

Jimena Canales holds the Thomas M. Siebel Chair in the History of Science at the University of Illinois, Urbana-Champaign, and was previously associate professor of the history of science at Harvard University. She is the author of The Physicist and the Philosopher, and A Tenth of a Second: A History.