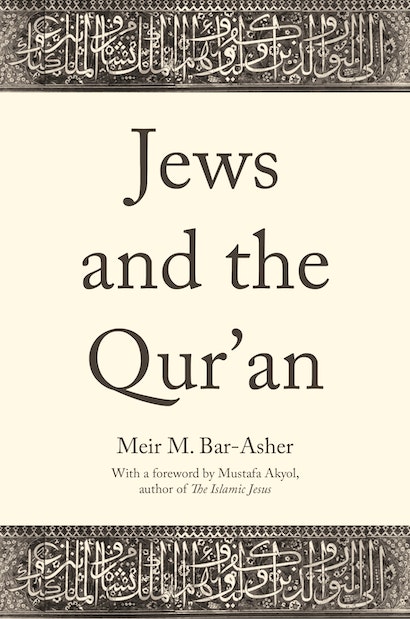 Jews and the Qur'an
Available in 2 editions
Buy This

Why is it important today to study the text of the Qur’an with special attention to historical questions, such as its attitude toward non-Muslims?

The Qur’an is a sacred text, and a most venerated source of inspiration for one of the greatest religions in the world. Acquaintance with the Qur’an and with its major contents—including its attitude toward its two sister religions, Judaism and Christianity—is a key to understanding Muslim civilization.

Who are the “Jews” mentioned in the Qur’an? What is their relationship to nascent Islam?

No source tells us which form of Judaism the Jews of Arabia really practiced. Are we dealing with a homogenous religious group or a collection of currents or even sects whose practices and beliefs filtered their way into emergent Islam? The Qur’an itself in various places alludes to the fragmentation of opinion among Jews regarding the divine Scriptures that were revealed to them. Yet the accounts in the Qur’an are very general in tone. It is therefore difficult to draw precise conclusions regarding the Jewish currents and sects that had split from rabbinic Judaism on the Arabian Peninsula. This question has preoccupied many scholars, but despite a proliferation of theories, it remains very much a matter of uncertainty to this day. Some think that the Qur’an alludes to the existence of a dominant, anti-Rabbinic current in Iraq and Persia in the first two centuries of Islam.

What are the key points in the Qur’an regarding the “place” of Jews in Qur’anic reflection?

The Qur’an is replete with principles of faith, concepts, and accounts that would have been familiar to readers of the Bible and postbiblical literature. This is obvious even on a superficial reading of the text. Sometimes, however, recognizing these elements requires more effort as they have been significantly reworked to fit the Qur’anic narrative and its specific qualities and aims.

For many scholars, the preponderance of legal concerns in the Qur’anic chapters of the Medinan period can be attributed to the influence of the local Jewish community. The laws concerning prayer, fasting, food, and the type of calendar to be followed do indeed demonstrate the undeniable influence of the surrounding Jewish culture, but close analysis also shows that Muslim scholars were careful to dissociate themselves from Judaism.

In the post-Qur’anic period, following the establishment of a great Muslim empire, Muslims’ acquaintance with other cultures and religions, including Judaism and Christianity, deepened. For example, when Muslims conquered Iraq, in which Jewish communities had lived for centuries, this encounter enriched the Muslim knowledge of Judaism, as is well reflected in Muslim sources, particularly in collections of Muslim traditions (hadith) and works of jurisprudence (fiqh).

What is the ongoing relevance of the subject matter of the book?

Since Muslims view the Qur’an as the most perfect divine revelation, its content remains always relevant. It is not only a trove of information about early Muslim historical events and Muhammadan teachings and precepts, but also a source of inspiration and guidance for Muslims at any time and place. What it teaches us about Jews, Christians, and their religions of the past remains vital and true in our world as well.

What is the specific attitude of the Shi‘a toward Jews and Judaism?

Among the issues the book addresses are the purported impurity of the Jews and precepts regarding marriage to a non-Muslim. Generally speaking, the Shi‘a are more rigorous in their assertion that the people of the book (ahl al-kitab) are unclean, an attitude that has implications for practices concerning marriage and food. Paradoxically, the Shi‘a readily claim exclusive filiation with the children of Israel, perhaps on account of the discrimination that they, like  the chosen people under Pharaoh and other adversaries, have experienced throughout history.

What are the prospects for a more universal and ecumenical understanding of the traditional attitudes toward “the other” in the sacred text of the Qur’an?

The Qur’an is a multifaceted text, with a plurality of voices engaging many questions, including attitudes toward “the other.” It has thus also given rise to pluralistic attitudes in post-Qur’anic Islam. It is true that every position expressed in the Qur’an requires an explanation within an appropriate historical, cultural, and religious context. Nevertheless, the very existence of Qur’anic passages and prophetic traditions that present “the other” in a positive spirit also fosters moderation and tolerance, an approach that has at times been adopted by leading enlightened clerics. It is to be hoped that such an attitude will strengthen in the days to come.