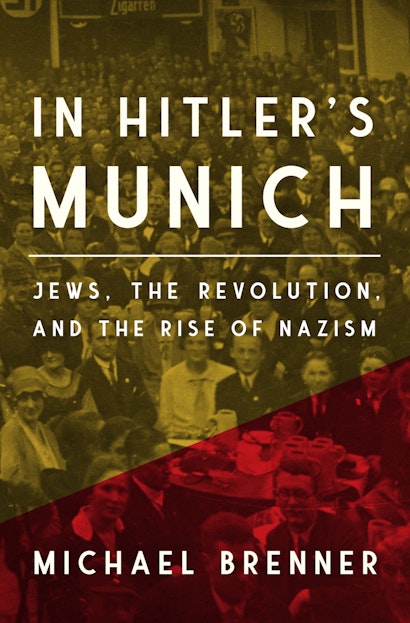 In the aftermath of Germany’s defeat in World War I and the failed November Revolution of 1918–19, the conservative government of Bavaria identified Jews with left-wing radicalism. Munich became a hotbed of right-wing extremism, with synagogues under attack and Jews physically assaulted in the streets. It was here that Adolf Hitler established the Nazi movement and developed his antisemitic ideas. Michael Brenner provides a gripping account of how Bavaria’s capital city became the testing ground for Nazism and the Final Solution.

We know already so much about Hitler’s rise. Why this book?

MB: The rise of Hitler in Munich is indeed well-documented. But what we did not know is how early and how rapidly Munich became the center of antisemitism. The Bavarian capital served Hitler in the early 1920s as a testing ground for many of his ideas which he implemented once he was in power after 1933. What he realized in the early 1920s is that he and the Nazi movement were able to get away with many antisemitic actions and even received state support for them. It is crucial to see Hitler’s rise as a politician not in isolation, but in the context of the history of the city that served him as a laboratory in the early 1920s. As Hitler described it, Munich was for the Nazi movement what Mecca is for Islam and Moscow for communism. Thus, this book tells a multi-layered story of Jewish revolutionaries, antisemitic conspiracy theories, a frightened Jewish community, and the rise of the Nazi movement.

Explain the political situation in Munich after World War I.

MB: The Bavarian monarchy was overthrown on November 7, 1918, actually a couple of days before the German Emperor resigned in Berlin. What was different in Munich, was the prominent representation of Jewish political leaders in the revolution of 1918 and during the two-short lived council republics in April of 1919. In fact, Bavaria was the first German state to have a Jewish Prime Minister: Kurt Eisner, who established the Free State of Bavaria. But with the rise of Jewish politicians we also see a backlash, a rise of antisemitism. In Kurt Eisner’s papers I found hundreds of antisemitic letters written during his short tenure. After only three months he was assassinated in February 1919 by a right-wing activist. He was followed by other Jewish leftist leaders, some of whom were also murdered or executed briefly after the second council republic was overthrown in May of 1919.

Did the sudden presence of Jewish politicians cause the rise of the Nazi movement?

MB: No, although many right-wing extremists, including Hitler, claimed exactly that. Conservative circles also did not accept that for the first time in German history Jews would be in responsible political positions. But the rise of the Nazi movement would have most likely happened without a few Jews being in leading political positions for a brief period of time. The right wing looked for internal scapegoats to explain the loss of the war, because they believed the German army could have never lost on the battlefield. Instead, they blamed the German loss on the supposedly unpatriotic stance of Socialists, and on the group that was always blamed when something went wrong, the Jews. This was the so-called “stab-in-the-back” legend. By 1920, Munich—once known as a liberal city—had become the center of all kind of conservative forces in Germany. Right-wing activists from all over Germany and Austria now flocked to the Bavarian capital and facilitated the rise of the Nazi and other extremist movements. Some of the leading politicians in Nazi Germany played their first public roles in the Bavarian government and in the Munich police force. And the Bavarian justice sytem often glorified the crimes of right-wing extremists as patriotic and let them get away with mild sentences.

How did the Jews of Munich react?

MB: We have to understand that the approximately 12,000 Jews of Munich—most of whom had their origins in rural regions of Bavaria and worked in commerce and trade—did neither identify with the political left in general nor with the Jewish revolutionaries in particular. In fact, probably no one else hated the Jewish revolutionaries so much as the established Jewish community. They knew that if the revolution failed, “the Jews” would be held responsible. And that’s exactly what happened. Just as the Jews in Russia used to say: “The Trotskys make the revolution, and the Bronsteins [Trotsky’s original name] pay the price.” Among the original findings of my book are letters of Bavarian Jews asking Eisner to resign in order not to threaten the Jewish community. I also for the first time systematically examined the Jewish press with regard to the Jewish revolutionaries and the rise of Nazism.

Why the title, “In Hitler’s Munich”?

MB: Hitler was a low-ranking soldier returning to Munich from the First World War who was without employment and in search of a mission. Within a few years he would become not only the focus of the new extreme right-wing forces in Weimar Germany but also the dominant political figure in Munich, even though he did not hold any political office. By the summer of 1923 the political upstart had left such a strong imprint on the Bavarian capital that Germany’s foremost novelist, Munich resident Thomas Mann, called Munich “the city of Hitler.” In fact, Munich by then had become a hotbed of right-wing extremism, with synagogues under attack and Jews physically assaulted in the streets.

What is the relevance of your story in today’s America?

MB: When I began writing this book I did not foresee that it would become relevant to events happening in the United States of America one hundred years later. Obviously, the numerous differences between interwar Germany and the insurrection at the US Capitol on January 6, 2021 stand out more starkly than the similarities. The instigators of the Munich Beer Hall Putsch did not support a president who was voted out of office. They did not gather in front of the nation’s seat of power. Instead, they started their rally in a beer cellar in the Bavarian capital where a young Adolf Hitler seized control after silencing the politicians and the crowd assembled there with a pistol shot into the ceiling. But despite these and other differences, Germany during the 1920s offers crucial lessons for us today of about how democracies become imperiled. History never repeats itself, but in this case it does rhyme. The German example warns us that knocking down an insurrection does not mean the fight for democracy has been won yet.

Michael Brenner is the Seymour and Lillian Abensohn Chair in Israel Studies and director of the Center for Israel Studies at American University and professor of Jewish history and culture at Ludwig Maximilian University in Munich. His many books include In Search of Israel: The History of an Idea and A Short History of the Jews (both Princeton).