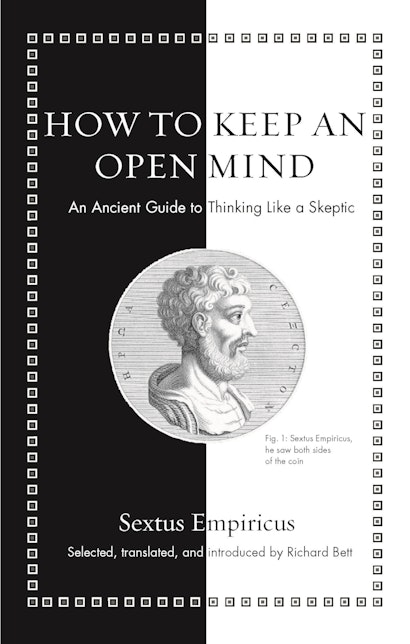 How to Keep an Open Mind is a selection of writings from the ancient Greek skeptic Sextus Empiricus. The title is mine, not his. Sextus’ skepticism is all about suspension of judgment concerning the true nature of things. Now that’s not quite the same as being open-minded. But I chose the title because open-mindedness is the lesson I think we can gain from Sextus’ approach if we adapt it to the twenty-first century.

So how do you get suspension of judgment, according to Sextus? On any given issue, you line up arguments and impressions on all sides of the question, reflecting on what can be said for and against each point of view. You do this in such a way that they all come to seem equally persuasive—to you or, if you are doing this in the company of others, to whoever is listening. And if this is your attitude—you really can’t see any one point of view on the question as more compelling than any other – you can’t help but find yourself suspending judgment about the issue altogether. This doesn’t stop you conducting your life based on how things appear; you just avoid any definite conclusions about how they really are. Sextus claims this suspension of judgment brings tranquility; a skeptic’s life is therefore more trouble-free than someone with definite intellectual or moral commitments.

The claim about tranquility seems more plausible in some cases than others. It’s also doubtful that, if you really look into it (which is part of what Sextus recommends), you’ll find yourself driven to suspension of judgment about every topic that comes to your attention. Even given the state of knowledge in Sextus’ own day, I think he overstates his case. But in today’s world, it’s just not plausible; we simply know too much. Of course, we don’t know everything; there are plenty of questions on which suspension of judgment may very well make sense. But the goal of across-the-board suspension of judgment is not a realistic option today, if it ever was.

However, if we don’t try to go along with Sextus 100%, I think we can still find something quite valuable in his example. What he gives us is a demonstration—an extreme one, perhaps—of what it is like to resist jumping to conclusions too easily. And that’s something that I think we could use much more of today.

Suppose you really do your best to look at all sides of a question. This will involve more than just noticing that a lot of different views are held about it; it will also involve looking at what the evidence is for these views—what basis people have, or could have, for holding them. If you find there actually is some decent evidence for a certain view that you hadn’t before taken seriously, that might get you to change your mind; sometimes, it might even lead you to suspend judgment. But even if you end up holding a definite view about the question yourself—at least for now—you will have reached it through an open-minded inquiry. Again, this is not quite what Sextus is pushing for; his agenda is to suspend judgment on all topics. But open-minded inquiry is what I think we can take from Sextus’ program, if we read him in a critical, yet sympathetic spirit.

I put together this volume before the 2020 election and its long, contentious aftermath, culminating in the appalling events of January 6. But the broader phenomenon of people being stuck in opposing ideological silos, accepting completely different views of what the basic facts are—let alone what to do about them—obviously precedes this. If we had more open-mindedness of the kind I’ve just sketched, we might have less of this phenomenon. First of all, if you really look into an issue, you’ll sometimes find the truth. To take the obvious case: Trump didn’t win the 2020 election and it wasn’t stolen. It’s not realistic to expect those who stormed the US Capitol to turn into sober-minded inquirers. But a great many others are convinced the reported election results are not legitimate; many of them could surely do better at checking the information they rely on.

But I don’t mean to suggest that the work to be done is all on one side. All of us could benefit from not being too sure of ourselves, and from checking, every so often, whether the things we are convinced of are as solid as we thought. Again, this may sometimes take us down Sextus’ path of suspending judgment. But even if it doesn’t, it may give us a greater appreciation of why many people think differently. And that, in turn, might do something to begin breaking down those ideological silos.

Richard Bett is professor of philosophy and classics at Johns Hopkins University. He edited The Cambridge Companion to Ancient Scepticism and has published widely on the subject. He lives in Baltimore, Maryland.