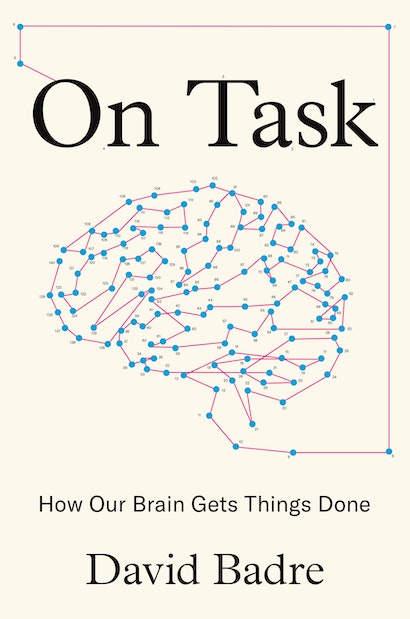 On Task
Available in 2 editions
Buy This

From my third floor attic office, I can hear my wife’s muffled voice through the door to the room just off the stairs. I can’t hear what she is saying, but from its now familiar cadence, I can tell that she is in a meeting. We used to post signs when we were in meetings, but we don’t bother anymore. One or both of us are almost always in meetings, and our signs never stopped our 9 and 11 year-old children anyway. That is when I hear the another familiar sound. My sons are arguing elsewhere in the house. Somebody took someone else’s spot on the couch or grabbed something without asking or looked at someone funny. It’s the usual sibling thing, only amplified because they are sick of each other after 5 months in quarantine. Once again, I set aside the grant I’m writing and head downstairs to referee. Just another interruption, another disrupted work flow, another day of immersive multitasking as a working parent during COVID-19.

Multitasking is constant for parents during COVID-19. To be sure, even when there is not a worldwide pandemic, our society has a problem with multitasking. Our smartphones and other devices routinely interrupt us with notifications and alerts, distracting and tempting us to do tasks other than what we are currently doing. But, under usual circumstances, you can shut off the notifications on your phone. You can decide to leave the laptop at the office. You can turn off the ringer of life’s demands and just unplug for a bit.

However, if you’re a parent during COVID-19, there is no off switch for your kids. They are more demanding than any alert on your smart phone, more distracting than any text notification, and have fewer boundaries than that colleague who wanders into your office to chat anytime they want. Even when they are not in the room they are present. As my wife put it, on a typical day in our bizarre workplace, one of our “co-workers” is loudly playing a game at full volume with his friends over Zoom while the other “co-worker” is in the bathroom singing at the top of his lungs with the door wide open. As a parent, we are always somewhat aware. Even when we aren’t actively teaching, feeding, or caring for our children, our attention is divided. Short of when they are sleeping, they are occupying some of our notice.

Schooling makes the situation worse. As I write this in August, many parents are making an impossible choice. Send your kids to school and risk their physical health, or keep them home and risk their education and mental health, to say nothing of your own. Remote school in the spring was an utter disaster for many working parents. They were hopelessly torn between home schooling and work demands. Standards dropped quickly. In our case, an elaborate plan of enriching educational activities at the outset rapidly deteriorated into whatever shows on Netflix won’t traumatize them and video games. “Just do no harm,” became the Hippocratic oath of our parenting. Because we need space and time to work, finding a way to safely occupy our kids became the priority. Nurturing their growth is another matter.

For many parents, as it is for us, these struggles can be a source of frustration, or indeed, shame. After all, a recent Wall Street Journal column from a prominent psychoanalyst told us that “Because of Covid-19, my patient [a new mother] now happily works from home.” That column declared that “When new mothers can work from home, they are able to focus on their work without feeling torn from their children. They can take breaks to feed, comfort and play with their children.” That sounds great! Why isn’t that even remotely my wife and my experience? Are we bad parents? The answer is no. Rather, the picture painted in that column is detached from reality. Having your kids at home while you work is a state of near constant multitasking, and multitasking is really hard.

All of us are bad at multitasking, and the people who think they are good at multitasking are the worst at multitasking. As a general rule, when we do more than one task at the same time, we take longer and produce lower quality work, than if we had done each task by itself. This cost of multitasking is one of the most established observations in scientific psychology and neuroscience. There are many reasons for this cost, but one of them is that it is a price we pay for being so clever and mentally adaptable as a species.

Humans are uniquely capable of setting just about any goal and then planning and executing the actions needed to perform it, even if we have never done precisely that task before. Consider that a large portion of the world changed their daily lives radically and all at once at the start of COVID-19. No other species could have done this kind of coordinated, major behavior change. This was expressed even in the way we carried out routine tasks. For example, many of us hadn’t used Zoom to do collaborative work before March. But, we didn’t take weeks or months of patient trial-and-error training to learn to hold a Zoom meeting. Rather, even the most technologically challenged among us were able to get the basics of this new task down within a few days. Likewise, we quickly found new ways to entertain ourselves, socialize, and get food. We are this mentally nimble because of our capacity for cognitive control, also colloquially called executive function. Cognitive control is how our brain takes pieces of tasks we already know and reassembles them in new ways to do novel tasks. We can construct a new Zoom meeting task out of the many pieces of old previous tasks stored in our brains. In this way, cognitive control gives us great power to perform lots of new tasks as our circumstances demand. That includes new forms of multitasking you’ve never done before, like meeting on Zoom while you simultaneously check your child’s math assignment.

The problem is that if you are constructing tasks out of simpler building blocks, it is very likely that any two tasks are going to rely on the same parts somewhere along the line. Then, like a road system at rush hour, there is going to be traffic or interference between the two tasks. This will cause delays and lost information that will negatively affect both tasks. Again, our cognitive control system helps with this problem by routing, managing, and keeping focus on our tasks when these conflicts arise. Nonetheless, this only minimizes the problem rather than solving it. Further, the data tells us that when we use cognitive control to do things like multitask, it comes with an experience of mental effort. So, it can feel exhausting to manage it all, even when you’ve sat inside all day!

The practical consequence of all this multitasking will be a loss of productivity for parents. As an example from my own professional sphere, a recent study published in the journal Nature Human Behavior reported that working parent scientists are devoting between 30 and 40% less time to research since the pandemic hit. And early reports suggest that our primary output, publication submissions, have likewise declined for parent scientists. Moreover, these studies show that women are being affected more than men on these measures. This stands to reason. Mothers are multitasking more. The New York Times recently reported that 80% of women say they are doing more home schooling than their partners (By contrast, 45% of men say they do more, a discrepancy which is both humorous and sad).4 In the sciences, this has translated into even less time for research for women relative to men. These data are troubling, particularly for scientists at early stages of their career who are also more likely to be parents. Further, these outcomes raise concern that we may lose what gains have been made in recent years to achieve more gender equity in science.

What can be done? First, institutions need to recognize that parents with younger children are particularly vulnerable during COVID-19. Multitasking costs are real and they are being imposed in this crisis on parents in a way that is hard to avoid. We should expect this cost to have real effects on productivity. As has been said by others, we chose to be parents, but we didn’t choose a pandemic. Businesses, schools, universities, and other institutions need to make allowances accordingly.

Second, there may be things you can do that reduce the burden of multitasking. Keep in mind that multitasking costs are largely immutable. The surest way to avoid multitasking costs is not to multitask. But, barring this, one can try to structure your environment to help your control system do its job managing all your tasks. For example, if your home supports a place where you only work and a separate place where you care for children, this allows the differences in the environment itself to support your focus on the tasks you do there. Likewise, if you share childcare with another person and can divide the day, such that you have consistent work or parenting hours, this again can aid your task control. However, for many of us, these kinds of adjustments are unrealistic. And, to be clear, none of these tips are cures for multitasking costs.

So, above all else, just try to be kind to yourself. You can plan and schedule and make your lists. But, keep in mind that this may all go out the window when you multitask with kids. Make peace with the fact that it is going to take you longer to do your work. Or, if you must move quickly, then you will need to sacrifice quality. In other words, you will have to make some compromises. Only remember: It’s not your fault. You are a COVID-19 parent.

David Badre is professor of cognitive, linguistic, and psychological sciences at Brown University, where he is also on the faculty of the Carney Institute for Brain Science. He and his lab have made pioneering contributions to the neuroscience of cognitive control and executive function. He lives in Providence, Rhode Island. Twitter @BadreLab